The house is filled with laughter and playful banter as Holly Powell and her four kids bustle about the kitchen in their rural Rigby, Idaho home. It’s her oldest son’s birthday and the family is quickly, and quite efficiently, working to prepare his favorite meal. Holly’s husband and each of her kids have taken up their stations in the kitchen, making light work out of preparing the fragrant dish.

Although not all evenings play out like this one, Holly and her family try to sit down together for at least one meal a week amid their busy schedules. But, prior to just a few years ago, an evening in the Powell home may have been quite different. 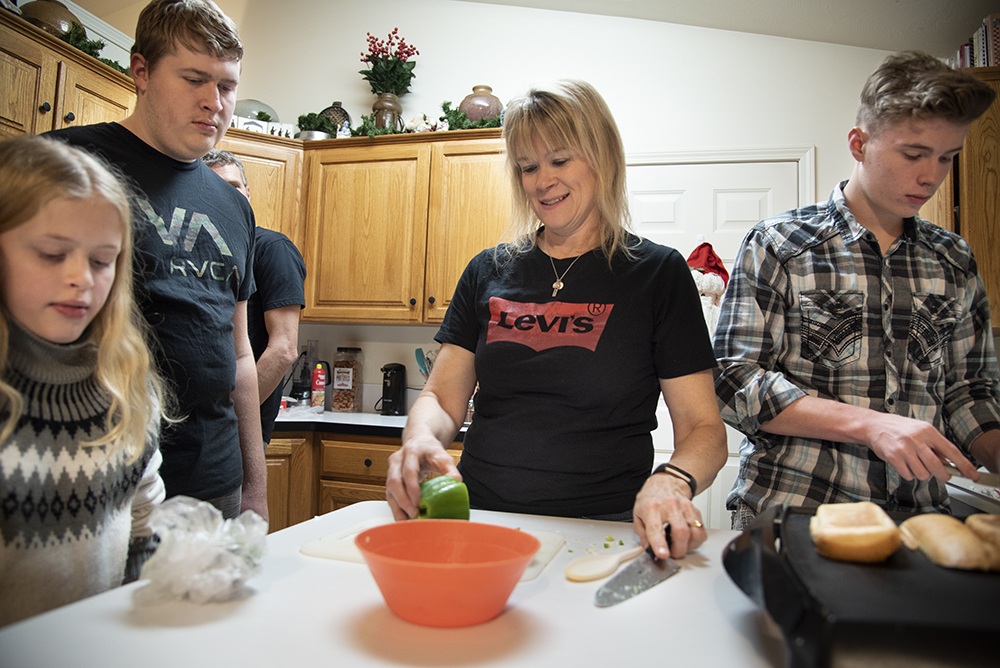 Photo: Holly and three of her four children cooking dinner at their home in Rigby.

“I was a stay-at-home mom for 17 years,” said Holly whose children now range from ages 10 to 22. For Holly, the opportunity to stay at home with her kids as they grew up was an incredible opportunity. “It was important to me, and I am so glad I was able to do it. But for me, being out of the workforce for so many years took its toll on my confidence.” As her children began to leave the nest, Holly realized her need for a challenge. She needed something new to set her mind to and to begin to shell off the insecurities she had developed.

Easing into work, Holly took a job at a local lumber yard on Saturdays. “I fell in love with the whole idea of business,” Holly smiled. “But, it was a small business and although I felt like I had great ideas, I lacked the background to really explore those ideas and the small business didn’t lend much opportunity for growth.” Recognizing that her journalism degree from 20 years prior wouldn’t merit the credentials she needed to enter a business field, Holly began to wonder if she should go back to school.

“There was one huge stumbling block,” she explained. “Math had never been my strong suit and in fact I questioned my ability to pursue a degree that had anything to do with math.” So, when Holly’s husband suggested she pursue her Master of Business Administration, Holly laughed. “I was like ‘yeah, right!’ an MBA? That just seemed so impossible.” But, the more her desire to work in the business field grew, the more she realized that’s what she wanted to do.

That fall, at the age of 42, Holly stepped into the college classroom nervous and excited to pursue her graduate degree at Idaho State University.

“With that first class, I knew I had found my niche- I loved it!” Starting with one course a semester, Holly finished macro-economics, ready and excited to continue. “But, my next course, business statistics, was a reality check. Not only did I struggle with the statistics concepts, but the math was... overwhelming.” Feeling unsure of her ability to continue, Holly realized she had to make a choice. Was she going to stick it out and overcome the struggles she had faced with math since high school, or was she going to quit?

“It was probably the hardest thing I had ever done up to that point mentally, and it took everything I had. But, when I saw the ‘A’ on my transcript, I couldn’t believe it. Then, I got to thinking, if I could do this, what else could I do, what else was I capable of?”

This first triumph in Holly’s graduate studies opened the door for success after success as she began to discover her full potential. In her next course, Holly’s work on a real-world negotiation paper was found to be so impressive by management professor, Alex Bolinger, that he suggested she turn her work into a professional case study. She later co-authored the study with Bolinger and presented her findings at a case research workshop in Kansas City among college professors. 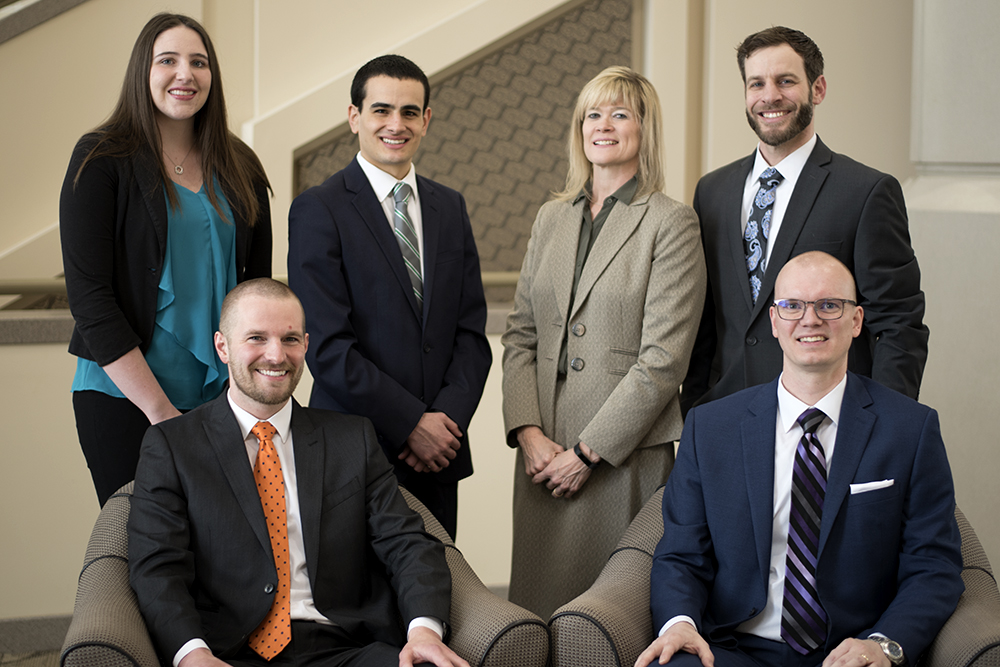 Later, Powell was competitively selected to participate in the International Collegiate Business Strategy Competition (ICBSC). This intense competition, invites teams from around the world to work in executive roles running fictitious companies throughout an expedited business simulation. ISU is the only school to participate in the ICBSC in the surrounding states.

Holly was the only student to be selected to participate in the ICBSC twice and was the teams’ first female Chief Executive Officer her second time around.

Holly began her journey as a non-traditional student, unsure of her capability, having been outside of not only school but the workforce for two decades. But, throughout her experiences, Holly’s perception of herself changed. “The experiences I had at ISU gave me the confidence to be who I am today. It granted me the tools to work through problems and accomplish things that even today may stretch into the unknown.” For Holly, her education expanded her comfort level, it opened her mind to be able to see the world from different perspectives and accomplish tasks that started out as a simple interest back when she started working at the local lumber yard. 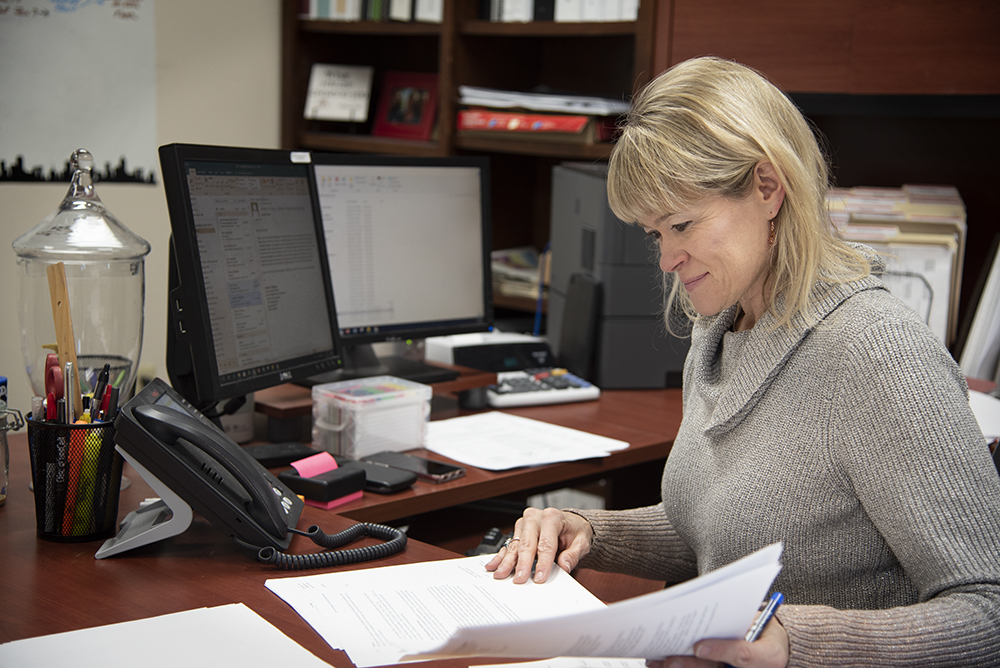 Today, Holly serves as the Treasurer for the City of Blackfoot. Within this role, she has helped secure and oversees $6.5 million in grant funding for the city. A job, that is entirely based on math. She serves as the District 5 Director for the Idaho City Clerks, Treasurers, and Finance Officers Association (ICCTFOA) and she served on the III-A Audit Review Committee for the FY 2018 audit.

Photo: Holly at her office in Blackfoot, ID.

“Getting an education is not the same as earning a degree. To earn a degree, you get a list of courses, you take classes, you graduate, and you move on. Getting an education is what happens to you as a person, as an individual. It’s the changes that take place in the course of that study.” For Holly, beyond her coursework, her education brought on opportunities and experiences that helped her to understand what she was truly capable of.

Upon graduating in 2018, Holly was recognized as the top MBA student in her class. 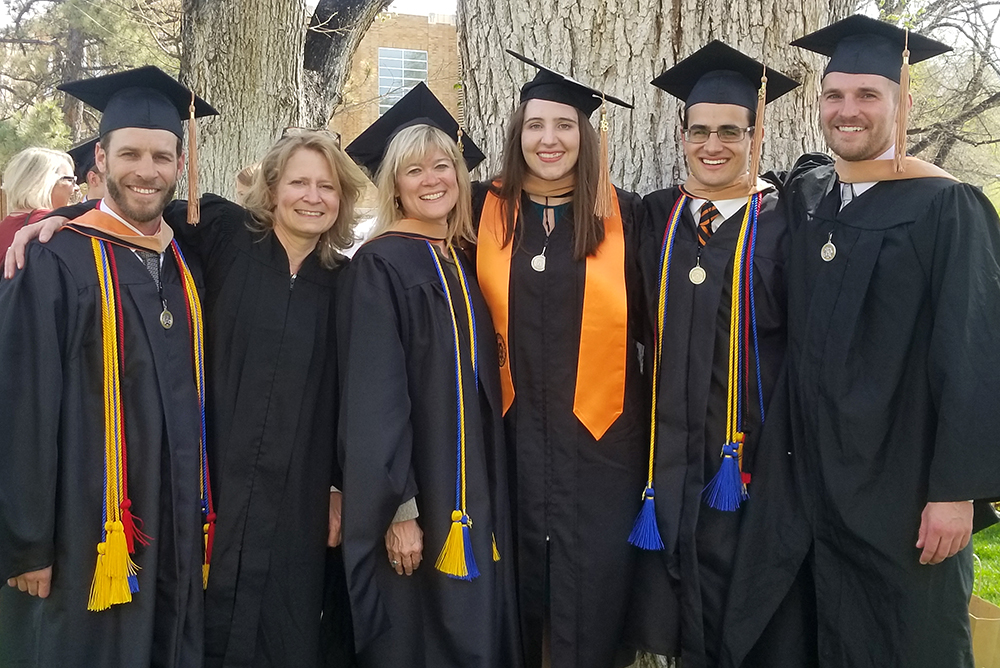