Researchers Use Neutron Radiography to Detect Pollution in Sea Sponges

A tool for visualizing damage to materials made to withstand the harshest conditions inside a nuclear reactor is now being used to examine some of nature’s more delicate species.

Tiny imperfections in nuclear fuel rods or changes to reactor components caused by the bombardment of radiation can have big impacts on performance and safety.

Few methods exist to detect these problems without destroying the specimen itself.

Now, after a series of upgrades, this powerful imaging technology can assist researchers in other scientific fields as well. 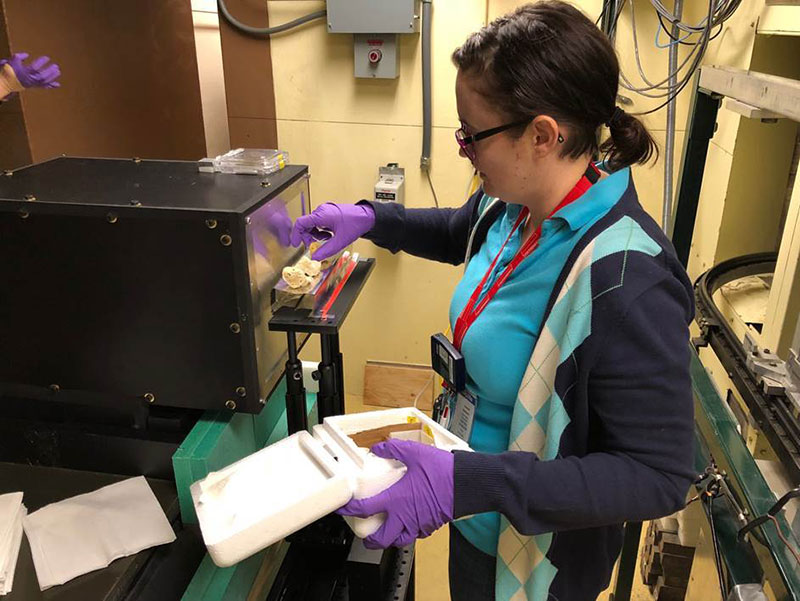 Idaho State University biology student Amanda Smolinski is collaborating with engineers at NRAD to make images of Dragmacidon lunacharta, a sea sponge that is known to accumulate heavy metals in waters with high levels of pollution.

The images will help Smolinski to learn more about how to find and clean up ocean pollution. In turn, Smolinski’s project will help NRAD establish itself as an imaging capability for a wide range of scientific pursuits, from learning about how battery chemistry changes during discharge to exploring the innards of dinosaur bones.

Neutrons are similar to X-rays in that they penetrate a specimen to create an image of internal structures. But neutrons are different. Instead of interacting with the electrons of an atom, like an X-ray, neutrons interact with the nucleus.

Where X-rays show harder substances such as bone and teeth, neutron radiography shows the softer components of a specimen, especially substances containing hydrogen. Neutrons interact with these substances in a way that allows researchers to create images of internal soft structures using either traditional film or, now, digital imaging.

Smolinski is using neutron imaging to examine the dried soft tissues of sea sponges for signs of cadmium, a naturally occurring metal that is used in metal manufacturing, the pulp and paper industry, and phosphate fertilizers.

While some sea creatures need trace amounts of cadmium for their metabolism, high levels can be toxic for fish and other ocean wildlife. If researchers could learn more about how sponges absorb cadmium, it could help increase knowledge about how cadmium affects other sea life, where pollution is located, and how to mitigate its effects.

Because D. lunacharta and similar species of sponge are so widespread, they could serve as a useful biomarker to gauge levels of pollution in the world’s oceans, said Smolinski.

“They can be used to classify the type and, hopefully, quantify the amount of pollution in the marine environment from which they are harvested,” Smolinski said. “I’d like to use that information to create pollution maps.”

The pollution maps could then be used to trace the pollution to its source and help with cleanup efforts.

To create the images, Smolinski offered her sponge specimens to NRAD, where her husband, Andrew Smolinski, works as a nuclear facility system engineer.

Researchers at NRAD have developed digital neutron radiography and tomography capabilities using digital cameras that are shielded against radiation.

Without digital radiography, taking a full set of film radiographs might take a month or more, and previous generations of computers might take several months to reconstruct a 3D image from hundreds of film images.

“This new system allows us to perform neutron tomography in less than a day, which makes it a practical research tool for scientific applications such as this,” Craft said. “It opens up new avenues of collaboration with universities, museums and other research institutions.”

These new capabilities have allowed Amanda Smolinski to explore the anatomy of sea sponges in a way that would be impossible without neutron radiography. Eventually, she hopes to branch out to other species. One day, she hopes that agencies may even use sea sponges to soak up pollution.

“If the sponges are able to absorb the pollution in appreciable amounts, and if they can keep it locked in their biological structure over the long term, they may end up being useful for the remediation of the pollution we are tracking,” she said.

The early results look promising: After examining neutron radiographs of her sea sponges, she’s found what she believes are cadmium deposits. Next she plans to run similar experiments with sea snails and a different species of sea sponge.