The Adventure of a Life's Work

When you are doing research in one of the most remote, least populated and largest wild areas left of the planet, it can help to take a baby or two along.

That is one of the discoveries, and part of her many adventures, that Idaho State University anthropology Professor and Chair Katherine Reedy has made after conducting research for more than 20 years in Aleut villages located along the nearly 1,200-mile-long chain of Aleutian Islands that stretch westward from mainland Alaska toward the Kamchatka Peninsula in Russia.

Reedy, an Idaho native who earned her undergraduate degree from the University of Wisconsin and her master’s and Ph.D. from the University of Cambridge, England, first started completing research in the Aleutians in 1995 as volunteer, and has been taking trips to the region annually ever since, “except years when I was having babies.”

Those babies, Alex and Gus, now age 17 and 13 respectively, proved to be a boon in her interactions with indigenous Aleuts who she has interviewed for a variety of studies.

“When I first went up there I didn’t have kids, and then when I started having kids it seemed like the people in the villages were more interested in my kids than what I was doing,” Reedy said. “One time I was there without them and this woman said, ‘don’t come back unless you bring your kids.’ They love kids.”

Her kids, in turn, have enjoyed their time in the Aleutians exploring, fishing and interacting with resident children.

When visiting, Reedy has benefitted from the generosity of the Aleuts.

“We try to eat what they are eating and they have been so generous,” she said. “Sometimes we get whatever is in the freezer, because they’ll be trying to fill their freezers for this year so they’ll give us last year’s fish, or there have been cases when they give us a rod and reel and said ‘go down here and you’ll catch some pink salmon’ and we did. They are just so proud of their food that they want us to taste it and experience it.”

She has come home with gifts of dried fish, smoked fish, jars of salmon berry jam and other foods.

Aleuts eat a lot of salmon, cod and other fish.  Hunters also harvest sea mammals such as sea lion or harbor seals and waterfowl. They also collect a lot of salmon berries and moss berries, the latter which Reedy described as “little hard berries that are really so sour that you have to mix them with a lot of sugar.” On some islands, the Aleuts hunt caribou and other land mammals.

The Aleutians are in an extreme environment and Reedy has had some unusual experiences completing her research, a few that are recounted in brief below.

•Volcano explosion. The Aleutian Islands and the Aleutian Range have more than 50 active volcanoes and once, in 2009 when flying in small plane from Anchorage to Unalaska/Dutch Harbor, Reedy witnessed Mount Redoubt erupt.

“We had to refuel in King Salmon to top of off the tank and when we took off, boom, it erupted,” Reedy said. “We had all been looking at it out the windows because it had been puffing. We didn’t really feel anything, but all of sudden, the plume was way up in the sky and we were just all, ‘oh my god,’ and were just freaking out.”

The passengers still managed to take photos, but it was “too close for comfort, and I didn’t feel like we should be there,” she added.

•Scary boat ride. Once, when riding the ferry, Reedy got to experience what the locals call a “roll.”

“They warn you it is possible and you are praying it doesn’t happen and then it happens,” she said. “So we were coming from King Cove around the corner to the big dock in Cold Bay and just the way the water and current runs right there it can do this (holding up her hands, showing a wall and trough of water) so the boat just went on its side. That was terrifying. And I don’t swim.”

•Mobbed by Eagles, and not the Don Henley kind. Reedy was with a friend in Dutch Harbor and drove to the top of a hilltop offering fine views of the village and ocean and where a lot of immature bald eagles were roosting on the bluff. The two got out of the car to read an interpretive sign about the area’s World War II history.

“The juveniles just started dive-bombing us and we didn’t even know if we had time to even open the door and get into the truck or just dive under the truck,” she said. “The juveniles are the worst. It seems like they have something to prove.”

•The bear and the truck. The villages at the end of the Alaska Peninsula deal with coastal brown bears, which are subspecies of grizzly bears, but only larger. Reedy has had a couple close encounters with them, the most memorable was in King Cove when a person left garbage in truck parked in front of the house she was staying in.

“And this bear came over and was snooping around and could smell the trash and finally figured out where it was – we were watching this whole thing through the window,” Reedy said.  “And it got into the trash and was making a  mess, and eventually got up on the cab and starting jumping up and down and smashed the whole truck. That was hilarious.” 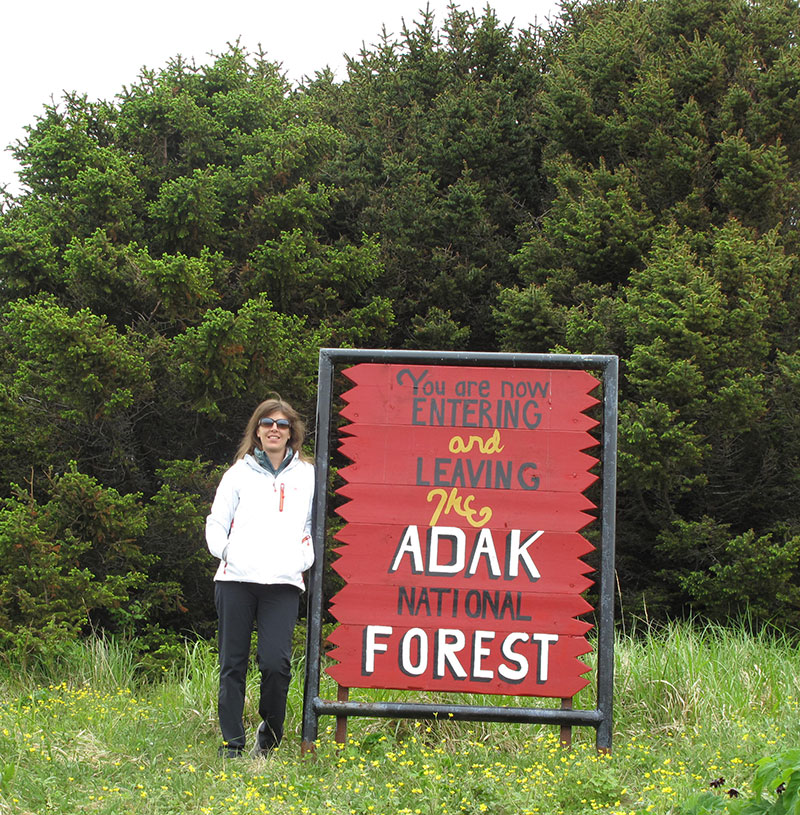 •Big wind. Once, while she was staying in King Cove, a big storm with “sideways rains” moved in that featured winds strong enough to blow over parked vans, tear the lights off of crabbing boats moored in the bay and blow the roofs off buildings, including the one Reedy had been renting.

“So that day I had gone up to a friend’s house to stay with her daughter while she was traveling and that night the storm hit and blew the roof off the house I’d been staying in,” she said. “People had gone to look for me and they didn’t know I had gone to say with this friend.  And I went back to the house, it was just a living room and sky.”

For the past 24 years while completing both academic and applied research in the Aleutian Islands, Idaho State University’s Katherine Reedy, chair and professor of anthropology, has experienced changing insights into the Aleuts she has worked with. The focus of her research is community sustainability.

There are 13 major Aleut villages on different islands and Reedy has done research in 11 of them. Every village is different, some have small populations, such as Nikolski, which has about 25 residents, to the largest, Unalaska/Dutch Harbor, what has more than 4,000 residents, although at the latter only about 250 are indigenous Aleuts.

“My visits are usually for weeks, but it depends on the project, depends on who is with me, and depends on the weather,” Reedy said. “I think for Atka it took us two days to get there and four days to get home. That was more than spring break allowed so we had to explain ourselves when we got back.”

“But I use those projects to address bigger questions about community sustainability, about in-and-out migration, future fisheries, their engagement with commercial fishing, which is so volatile that you just can’t predict from one year to the next, and now with the climatic effects throwing things off, it makes it even more challenging,” she said. 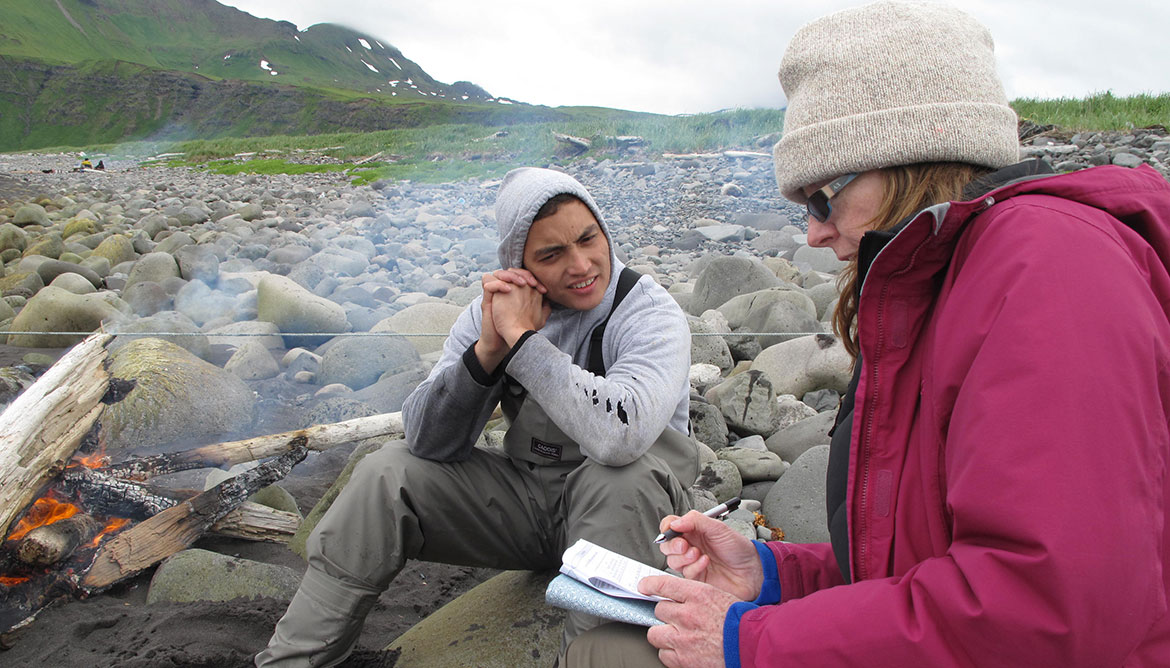 She also looks at the health of the communities, getting a sense of the overall economic and social well-being of the residents.

“I’ve been doing household interviews in every community and in some cases 100 percent of the households have been interviewed and that’s pretty remarkable for this kind of work and the logistics for doing it,” she said.

These subsistence surveys ask about everything from what kinds of animals households are harvesting annually, from salmon, other fish and sea mammals, to berries, land mammals, birds and eggs.

“We ask about sharing,” she said. “If you get 100 sockeye salmon, what do you do with it?  Do you keep it all to yourself? Do you smoke it, jar it, give it away? Where does it go? We ask who do you share it with and how far so that includes people outside the community, outside in Anchorage or even outside the state and try to track those connections and who is really taking care of who.”

Survey also asks about income, expenses and vocations other than subsistence activities.

“These are very expensive communities in which to live,” she said. “A lot of tourists go to Anchorage and get sticker shock, but that is the cheapest part of the whole state. The cost of a gallon of milk and gallon of gas can be about $12 each the further out the chain you go.”

The span of time she has been visiting the Aleutians gives her a special perspective.

“Returning as often as I do I see a lot of changes,” she said. “I see kids grow up and consider their futures. Some of them I knew when they were little kids and now they are parents.”

She has found that the Aleut villages and people are more interconnected than she originally thought, something that may have been helped by the Internet and cell phones that are now available.

“Initially I had a sense of isolation, working in the eastern communities, but broadening out in those other communities I do see the connections,” Reedy said. “People are sharing food long, long distances, they are starting relationships long distances and, in some cases, sending their kids into another village because they want them to have different opportunities. There is more of a community rather than an eastern and western difference.”

Reedy has also become aware of some of the effect of climate change on this region. She serves North Pacific Fishery Management Council’s Scientific and Statistical Committee, where climate science is regularly presented and discussed. Among those issues is the “warm blob,” the scientific term describing a huge warming body of water within the North Pacific that is wide and deep in the water column “that is affecting everything,” from salmon returns and cod and pollock fish populations, to a wide array of subsistence activities.

She has also observed a changing weather pattern. It is “definitely” warmer and there is more storminess in the last 15 or 20 years, Reedy said. She has had multiple summers in recent years in these villages when the weather was “gorgeous the whole time.”

“I took a crew to Sand Point a couple of years ago for spring break and it was sunny and gorgeous the whole time we were there. We didn’t see a drop of rain,” she said. “That is really unusual,” she continued.  “It is good for tourists and maybe for people not working there, but for the Aleuts it was nerve wracking.  It shouldn’t be so calm and nice at that time of year.”