More than 115 years ago a battle was brewing in Pocatello, and the city had a dilemma on its hands. Idaho Senate Bill 53 had just been passed to create what would later become Idaho State University, but one major hurdle remained. The bill required that land for the future institution must be secured before May 1, 1901, and the deadline was less than two months away.

Almost immediately, turmoil broke out in the Gate City between the east and west factions of the community—both sides battling over the distinction of having the new campus. For six weeks, community leaders met and argued about the location, and at times, arguments escalated to amusing levels. At the height of the dispute, the quarrel was titled, "Battle of the Blocks," to reference the ongoing disagreement over what city land would eventually be used to build the campus.

As time ran out and tempers flared, five sites were on the table, two on the west side of the railroad tracks and three on the east side. Arguments between residents continued, and a final decision about the location wasn't made until the morning of May 1, the deadline established in the bill.

More than a century later, students and alumni now use the battle over ISU's future location as an opportunity to build school spirit. The movement is known as "The Block," and is dedicated to igniting the fire of all Bengal fans.

"The goal is that students will see that the name stems from an old piece of ISU history," said Kitanna Belnap, a senior and president of the 1901 Student Alumni Association. "The hope of our student group is that it will inspire passion about traditions and that others will start to look into the amazing history of ISU."

The Block's main purpose is to make the experience of attending athletic events fun and to disrupt the opposing team's game plan. The Block currently focuses on ISU athletic events, but organizers say those plans may expand in the future.

"Even if a person doesn't really enjoy watching football or basketball, everyone enjoys being around other people to have fun at tailgating events or the camaraderie of cheering at events," said Craig Joseph, assistant director of admissions. "We want to make this about supporting the Bengal family and taking pride in where you are and the fact that you're at Idaho State University."

"The way I hope to reach out to people who don't like athletics is to make it an experience," Belnap said. "Hopefully The Block will be there for students who are not into sports."

Goals for The Block center on organizing memorable game-day experiences, which includes an energetic cheering section at games.

"I hope it becomes something that everyone connected to ISU can be proud of and inspires pride in being a part of the Bengal family. We want it to unify all students," said Belnap.

Organizers of The Block created a website with information about ISU cheers, game-day traditions, tailgating information and how to sign up as a member.

"We need to change some people's apathetic attitudes," said Joseph. "We want a college experience that people can look back on and say this was memorable, and it was great." 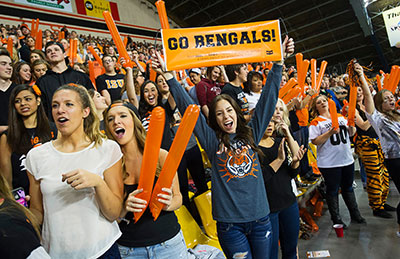