Mordor, a dark, stark and hostile land controlled by Sauron in J.R.R. Tolkien's "Lord of the Rings" trilogy, was the nickname of one of the National Aeronautics and Space Administration's (NASA) sites for studies taking place at the Craters of the Moon National Monument and Preserve this summer

"We've nicknamed it Mordor because it is incredibly rough terrain," said Dr. Shannon Kobs Nawotniak, Idaho State University geosciences associate professor. "Some of our radar readings suggest it is some of the roughest terrain on earth. It is very impressive."

ISU researchers are working with NASA at the Craters of the Moon as an "analog site" to mimic conditions and develop methods for astronauts to explore other planets, including Mars, which NASA hopes to put manned missions on in the future. Two NASA research teams, the Field Investigations to Enable Solar System Science and Exploration (FINESSE) and Biologic Analog Science Associated with Lava Terrains (BASALT) teams are at Craters of the Moon National Monument and Preserve this summer. The FINESSE and BASALT teams are working with ISU researchers and are led by NASA's Ames Research Center in Moffett Field, California.

"Our research is focused on microbial life on the volcanic rocks, including understanding what minerals they are associated with, how their communities have changed over time, and how our findings relate to the search for life on Mars," said NASA's Darlene Lim, principal investigator on the BASALT project, and Deputy PI of the FINESSE project. "That is the crux of the science we are doing here."

The BASALT team has scientific and operational functions. On the strictly science side, "astronauts" – one of them Nawotniak, co-principal investigator on these projects – were going out in the field collecting data on the geology of the rocks they were encountering. On the operational side, these astronauts – who headed in the field with 35-pound backpacks loaded with communications equipment, cameras, tools and others supplies in heat sometimes surpassing 100 degrees Fahrenheit to scramble over treacherous and sometimes sharp rocks for up to 4-1/2 hours per mission – are helping develop methods for astronauts to use on other planets to properly function as scientists. 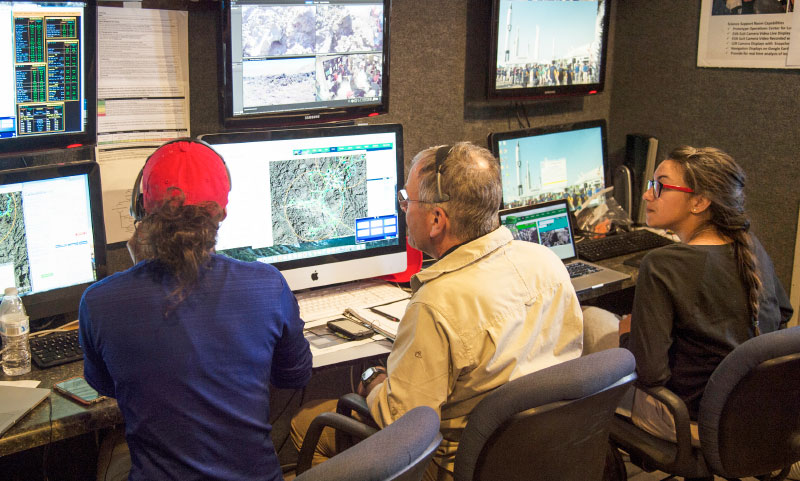 "If we are going to be really successful when we get there we have to start marrying the science and operational sides of the mission now, to make sure that our science is informed by exploration and our exploration is informed by science," Nawotniak said.

"In some analogs, astronauts conduct simulated rather than real science," Lim said. "But we are different because we are conducting real science, which adds another level of fidelity to our analog in that the samples our astronauts are collecting have to be to be publication-quality for the microbiology and geology that is being studied."

ISU's Nawotniak concurred: "This isn't mock science. It is real, authentic field science and we are responsible to publish on the data coming out of here."

One of the greatest operational challenges for NASA is dealing with the communications delay between astronauts on Mars and Earth. Using today's best technology, there is a 4-1/2- to 20-minute delay each way between these planets, depending on orbits, the location on Mars where astronauts are, the position of communications satellites and a number of other factors.

"Nobody really knows how to manage a human mission on Mars under these delayed conditions because there are so many complexities to contend with," Lim said. "So we are pushing to figure out the operational mechanics, the scientific requirements, the human factors and the physiological challenges associated with having humans conduct science and exploration on Mars to help the scientific and exploration communities prepare for this journey." 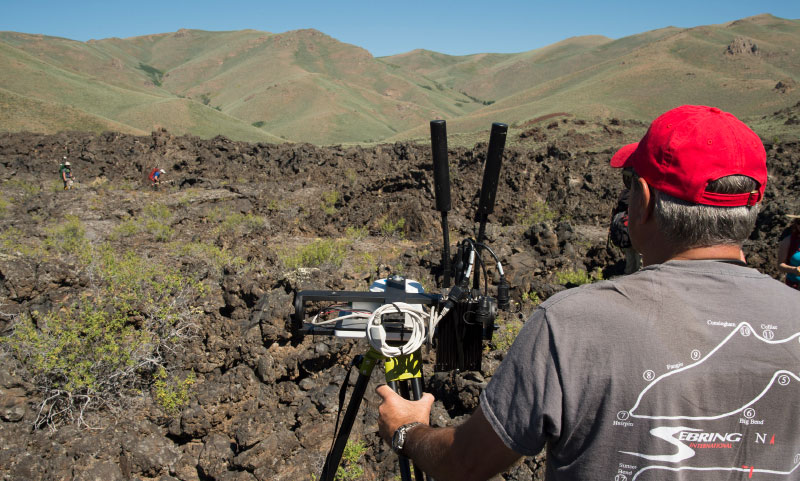 A NASA technician in the foreground provides backup to ‘astronauts’ Steve Chappell and Shannon Kobs Nawotniak, visible in the background of the photo.

To mimic the challenges astronauts will face dealing with this time delay, NASA set up a Mobile Mission Command Center, a miniature version of NASA's Mission Control you see on TV during a space launch, in Arco, 20 to 30 miles away from where the astronauts were in the field. The Mobile Mission Command Center had a small, cordoned-off area that served as an IVA pod. The astronauts in the field would communicate directly to the people in the IVA pod in real time using camera imagery, voice and digital data. Then the people in the IVA pods, testing 5 and 15 minutes delays, would then communicate information to scientists in the Command Control Station.

"It is really rough trying to be a partner in a conversational exchange when today we had a 15-minute, one-way travel for communication," Nawotniak said. "So I would say something, and 15 minutes later it gets to Earth. Then I have another 15-minute wait, assuming they answer me immediately. Because of the delay we have to be very cognizant of time and that we are giving the best information we can on the first pass."

And it is not just the technical aspects of the communication that are problematic, noted ISU geosciences Professor Emeritus Scott Hughes, who is also a co-principal investigator on the BASALT project, and, along with Nawotniak, is the geosciences lead.

Hughes also echoed what several others involved with the project said about the difficulty of the project so far.

"What has really surprised me is how complicated this whole project is," Hughes said. "It is complicated on earth and then to think about doing it on a real mission to Mars, the complications are just phenomenal. I think it is an amazing feat to set up this simulation and to get it to work."

"I am just amazed at some of the genius efforts that are going on with this whole operation," Hughes said. "There are people here that, my gosh, figure out stuff I could never dream of figuring out. They work hard and do whatever is necessary to get the job done."

Nawotniak took time to put this project in perspective.

"You can think of our fieldwork as a dress rehearsal for the manned mission to Mars, and it is happening right here in Idaho," Nawotniak said. "It is the natural follow-up from when they sent astronauts here to train for the Apollo Missions. They got them ready to go off planet by coming to Idaho and the Craters of the Moon, and now we're getting ready for the next evolution in space exploration once again right here in Idaho.

"When we actually get people onto the surface of Mars," she continue, "it is going to be in a significant part because of Idaho, Idaho State University and the National Park Service at the Craters of the Moon cooperating and working with NASA," Nawotniak said. "It is a great legacy that we are gong to have to pass on." 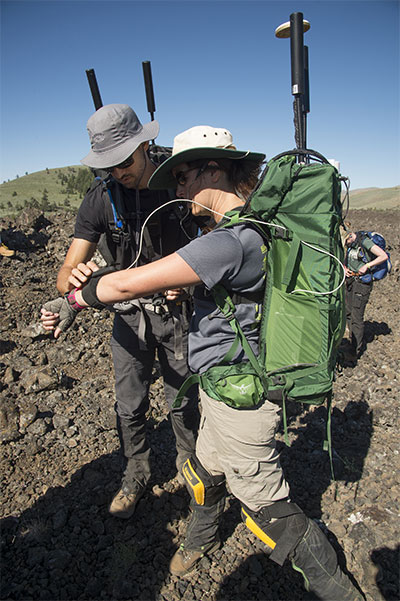 For more information on the BASALT project visit
spacescience.arc.nasa.gov/basalt

For more information on the FINESSE project visit
spacescience.arc.nasa.gov/finesse/outreach