Snorkeling upstream in the middle of night to identify fish is among the tasks Idaho State University student Matt Schenk has experienced deep in Idaho’s Frank Church River of No Return Wilderness.

Dressed in a dry suit and equipped with a water proof flashlight, between the hours of 10 p.m. and 2 a.m., Schenk would crawl upstream on his belly in small tributaries of Big Creek, a major tributary of the Middle Fork of the Salmon River, to identify fish—including West-Slope cutthroat, steelhead and bull trout—and estimate their numbers and size.

"It is brutal," Schenk said. "You get beat up and bruised on your knees, chest and elbows. It is a very intense kind of work."

Snorkeling mid-day in the main stem of Big Creek beside Chinook salmon near the finish of their 900-mile journey from the ocean, however, was more pleasant.

"Definitely, one of my favorite memories was snorkeling with full-size Chinook, 35 to 36 inches long, in some of the most remote wilderness around," said Schenk, from Burley, who is working on his master's degree in stream ecology from the ISU biological sciences department and earned his undergraduate degree in geosciences in earth and environmental systems.

ISU has a rich history of completing research in the 2.3-million-acre Frank Church River of No Return Wilderness, the largest contiguous wilderness area in the Lower 48. Several ISU disciplines complete research here, but the ISU Stream Ecology Center in the biological sciences department has the largest imprint, having collected data from here for decades. The Stream Ecology Center studies wildfire and climate change among other topics. 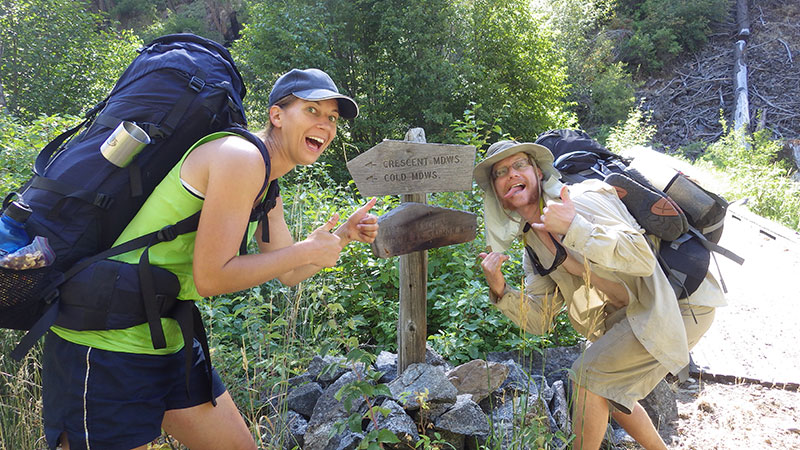 Mirijam Scharer and Adam Eckersell enjoying a silly moment at a trail marker on the Big Creek Trail.

"It is an extraordinary experience for all of us, but for the students that are involved every year, it can be a life-altering experience, especially for students who in some cases spend months in the wilderness," said Dr. Colden Baxter, director of the ISU Stream Ecology Center and an ISU professor of biological sciences. "But it can also be life-altering for those who spend shorter periods of time hiking in there for a week or two and combining that with doing science."

The size of the "laboratory" ISU researchers are using allows them an unusual perspective. Most stream studies are done on a small scale, or in rivers that have been heavily changed by humans.

"We have the Salmon River, one of the world's wildest rivers, and the central Idaho wilderness is a big chunk of territory that is still functioning naturally. It may have a lot more natural resistance and resilience than what we observe in non-wilderness ecosystems," Baxter said.

One of the large issues ISU researchers are studying are the direct and indirect impacts of climate changes, which in general is a pretty "gloom-and-doom sort of story," according to Baxter, but that isn't necessarily the case in the central Idaho Wilderness.

Idaho is known for its wild places and wild rivers, and if you come to the University to study ecology and the environment this is an example of the kind of extraordinary experiences that are possible.
— Colden Baxter,
director of the ISU Stream Ecology Center

"When you fly over it, you can see all of this change – most of it has burned since I was a teenager," Baxter said. "And if you had told people then that most of it was going to burn with that type of severity they would have predicted ecological catastrophe. Instead we've not only seen a lot of evidence of resilience, but also perhaps evidence that the dynamism, the change itself, is part of and necessary to maintaining the character of that ecosystem. It is a very dynamic landscape with dynamic rivers—we are trying to understand how important that dynamism is to the long-term character of these ecosystems."

Scientific knowledge and personal growth are benefits of the wilderness study.

"You learn a lot about yourself, including how to rely on your judgment. You just can't pick up a phone and call your advisor," said Schenk, who has spent months doing research in the backcountry. "You have to learn to be resilient and can't be frustrated, and it is always looming over you that something could go wrong. You really listen a lot and become in tune to the sights and sounds around you so you don't hurt yourself. And it is easy to get lost and that takes up brain power."

"For students of ISU, the character of the work and that experience in the wild is pretty distinctly Idaho," Baxter said. "Idaho is known for its wild places and wild rivers, and if you come to the University to study ecology and the environment this is an example of the kind of extraordinary experiences that are possible. It's just one of the strengths we have here - that we take advantage of the unique place in which we live." 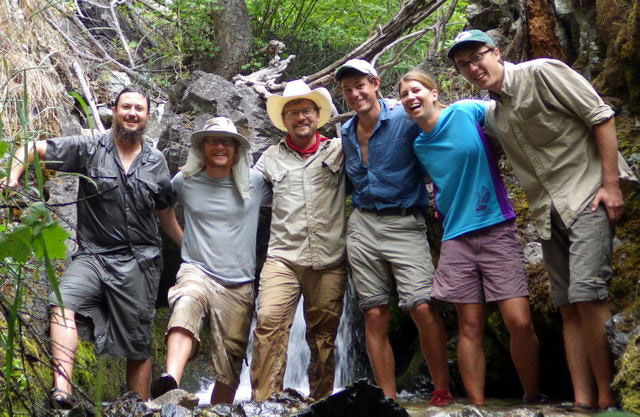 Much of the unique research conducted in the Frank Church River of No Return Wilderness Area, and the life-changing experiences for Idaho State University students who are involved, couldn’t take place without private support.

The ISU Stream Ecology Center receives support from the DeVlieg Foundation and James Morris, a retired electrical engineer, for these efforts.

Adam Eckersell a 2016 biological sciences graduate from Rexburg, has worked in the wilderness in 2014 and 2016, helping on a variety of studies, including examining the slime from rocks (algae and other microorganisms) on the bottom of Big Creek and its tributaries.  He has also snorkeled down Big Creek seeing Chinook salmon, west-slope cutthroat trout and bull trout.

“It was very unique that as an undergraduate I participated in research projects of this caliber,” Eckersell said. “And the fact that I got a stipend from the DeVlieg Foundation for it was even more incredible. It was a great, unique experience that not a lot of people get to do.”

The DeVlieg Foundation, currently based in Clarkston, Washington, was founded in 1961 by Charles B. DeVlieg, the Founder of DeVlieg Machine Company of Royal Oak, Michigan. DeVlieg, now deceased, became an international leader of precision machine tools.  The Foundation he started is to aid and promote educational programs and experiences throughout the United States, focusing on engineering, wildlife research and natural resource conservation, “especially those that encourage respect and stewards of the earth.”

Janet DeVlieg Pope presently is president of the DeVlieg Foundation that has also supported the Taylor Ranch in the River of No Return Wilderness and other studies and programs by the University of Idaho.

Pope said it is rewarding to support the ISU Stream Ecology Center’s efforts that are headed by its director, ISU Professor Colden Baxter.

“What impressed me the most about Colden, is his perspective of the whole picture of the ecosystem. He promotes top-notch students at an undergraduate level to have experiences they could never have anywhere else, except in the wilderness,” Pope said. “His students have actually published their undergraduate research from the summers at Taylor, a very impressive learning experience.

“The DeVlieg Foundation,” she continued, “is very interested in educating the young to learn about “wilderness,” to appreciate what they have and help insure that in the future wilderness will be saved for all.”

Matt Schenk, from Burley, is working on his master’s degree in the ISU biological sciences department and earned his undergraduate degree in geosciences in earth and environmental systems. He was also in the wilderness in 2014 and 2016 and he said he learned important life lessons while conducting the research.

“Some of things that are most important to me are that I learned to rely on myself and be resilient while doing difficult work,” Schenk said. “The camaraderie and companionship was also great. We worked closely together all day, ate every meal together camped together for a summer, you really get to know someone on a different level in that situation.”

Schenk received support from both sources.

“None of this would have been possible without their support,” Schenk said. “I wouldn’t have had my undergraduate work, let alone my graduate work opportunities without Janet’s (of the DeVlieg Foundation) support.  And Jim Morris has been a huge help. He has supported many projects, including mine, and beyond the money he comes in to participate in the research, which is awesome.”

Morris describes himself as a “self-educated electrical engineer, now retired.” He became acquainted with ISU in the early 1990s by volunteering to work with Professor Emeritus Wayne Minshall, a renowned naturalist and researcher, in Yellowstone National Park and the River of No Return Wilderness.  Morris created an endowment for the ISU Stream Ecology Center and also supports research by the University of Idaho in the River of No Return Wilderness.

“I particularly like to support ecosystem research that has a field component to it,” Morris said. “Working with ISU and U of I allowed me to get to places and see graduate-level work that I’d never otherwise get to. I learned through going out into the field and seeing some of the work that it is an effort worth supporting,” Morris said.

“ISU is a small enough university,” he continued, “that even my level of contribution can make a difference. It’s also gratifying to me that since the mid-1990s when I created the endowment that other people contributed to it.”

Baxter tipped his hat to both entities that support his and his students’ research.

“We simply couldn’t do what we do without their support,” Baxter said.