Idaho State University alum Rafi Ahmed will receive the 2017 Robert Koch Award on November 3 at the Berlin-Brandenburg Academy of Sciences and Humanities in Berlin. Ahmed will also be receiving 120,000 euros, approximately $135,379, in prize money.

Ahmed, who is currently the Vaccine Center Director and a professor at Emory University, will receive the award for his pioneering studies on immunological memory and T cell exhaustion. His research centered on how memory cells can store an immune response for a practically unlimited time, once learned.

Ahmed’s research has marked a radical departure from dogmas previously presumed to be reliable. For example, this is true of his proof that virus-specific memory CD8 T cells do not require a permanent stimulus with low quantities of corresponding antigens, as was believed until the mid-1990s. On the contrary, it is a property inherent in these cells themselves, which permits them to respond faster and more effectively on re-infection. Ahmed’s studies also defined long-lived plasma cells in the bone marrow that are responsible for maintaining antibody responses after infection or vaccination.

Ahmed graduated from ISU with both his bachelor’s and master’s degrees in microbiology in 1972 and 1974.

The Robert Koch Foundation, founded in 1907, is a non-profit foundation dedicated to the promotion of medical progress. The Foundation is based in Berlin, and promotes basic scientific research in the field of infectious diseases, as well as exemplary projects that address medical and hygienic issues. 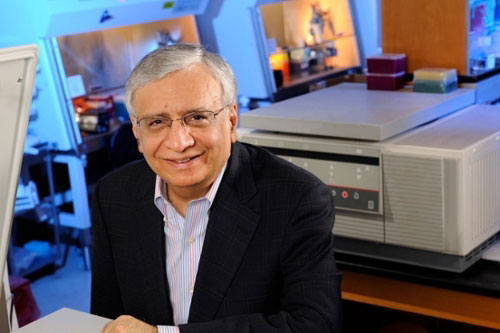 Robert Koch (1843 – 1910), after whom the award is named, was the founder of modern-day bacteriology, for which he was awarded the 1905 Nobel Prize for Medicine and Physiology. From 1891 until his retirement in 1904, Koch was Head of the Institute for Infectious Diseases in Berlin.