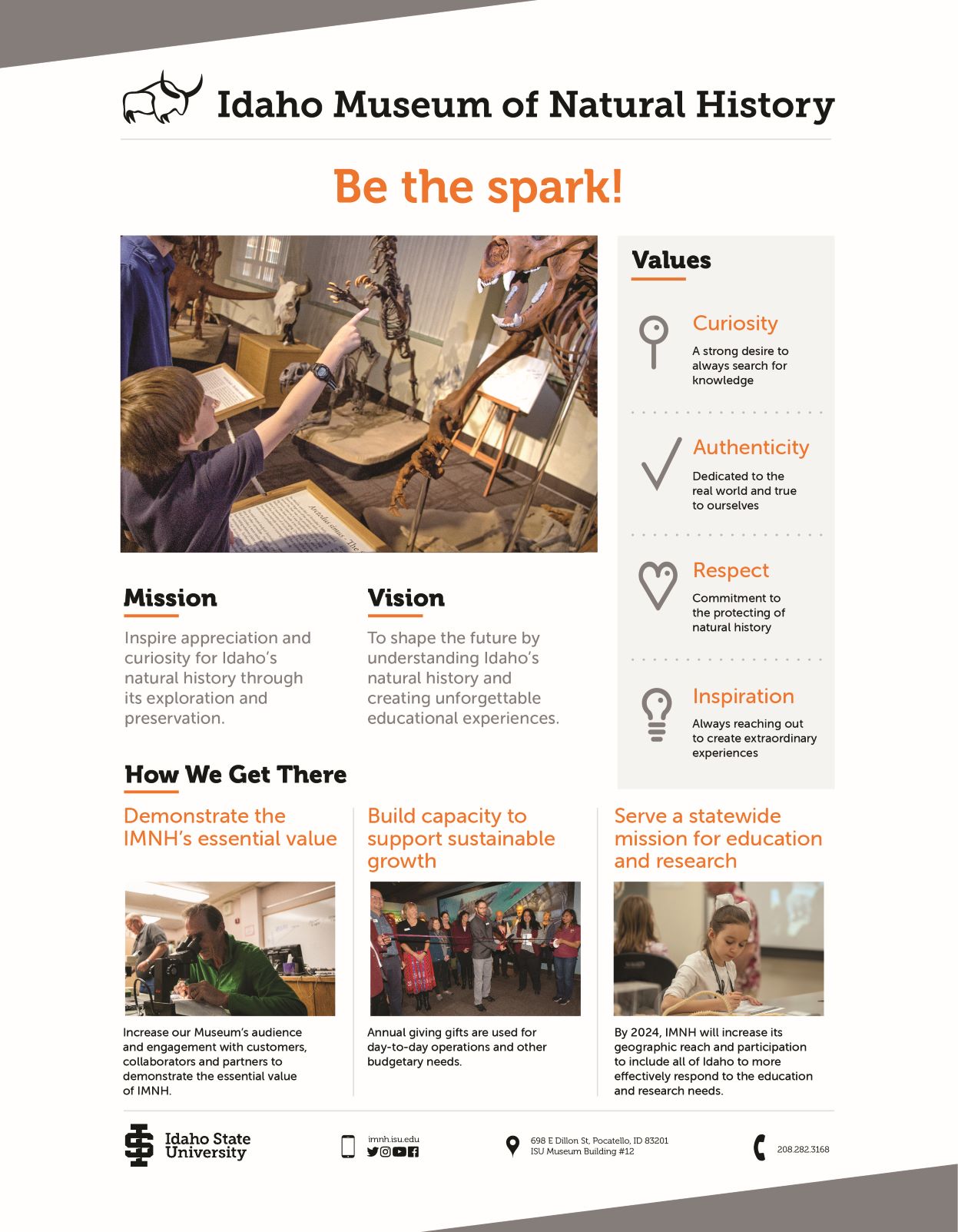 Our Mission: Inspire an appreciation and curiosity for Idaho's natural history and its exploration and preservation.

Our Vision: To shape the future by understanding Idaho's natural history and creating unforgettable educational experiences.

Although the founding of the Idaho Museum of Natural History is typically dated to 1934, the beginning of the collections and interest in building a museum in Pocatello go back as far as 1916 when Idaho State University was originally known as Idaho Technical Institute (ITI) with 350 students and 20 faculty members. The city of Pocatello was home to 16,000 residents and a growing economy at this time. Both the Institute and segments of the wider community looked toward the future by preserving the past. Faculty from the Idaho Technical Institute, the Pocatello Chamber of Commerce and local amateur collectors had begun collecting and preserving historical, archaeological, anthropological and natural artifacts reflecting the region’s natural and cultural history, for the benefit of academics and the public alike.

The Institute hosted lectures by notable historians and scholars and displayed historical exhibits. The popularity of the exhibits led the dean of the Idaho Technical Institute to appoint an Idaho Historical Museum Committee in 1934, directed by English professor Charleton Laird, Ph.D. The dean asked the committee to develop a plan for a museum to house these items. A variety of faculty and staff members joined the committee.

Over the years a myriad of dedicated individuals from diverse backgrounds has contributed wisdom, passion, and resources to create what is now the Idaho Museum of Natural History. It is those initial individuals who had the vision and drive that paved the path to formally establishing a museum in Pocatello to represent the cultural and natural heritage of Idaho and the northern Intermountain West. A couple of notable founders and contributors were Minnie F. Howard and Charleton G. Laird, both of whom were pivotal in helping establish the Museum.

Community members donated and transported materials and contributed financial support. The Idaho Technical Institute dean and faculty members traveled to give presentations and lobbied for support of the museum project. The community responded with generosity and enthusiasm. Additional community support was encouraged through two years of weekly broadcasts on Pocatello’s KSEI radio station. Artifacts and tools from Idaho’s settlement period and from area Native Americans poured into the Museum. By 1940 the Museum had around five thousand objects in its collections.

In 1957 the Idaho Historical Museum’s first director, Earl Swanson, Ph.D, was appointed. Over the next 18 years he developed it into one of the leading archaeological research facilities in the Intermountain West. The Museum was active in numerous, major archaeological excavations and the development and publication of Idaho Historical Museum scholarly journals such as Tebiwa. Dr. Swanson was pivotal in promoting a flint-knapping laboratory at Idaho State University under the guidance of Don Crabtree and the initiatives such as the Idaho State Highway Program in Archaeology designed to work with state agencies to remove and preserve archeological materials discovered during highway construction and to use highway funds for this purpose.

In 1986, the Idaho State Legislature passed an act formally recognizing and establishing the Idaho Museum of Natural History as a state entity (Idaho Statute 33-3012). From that time on the IMNH has been a Special Program of Public Service with separate line-item funding of the Idaho State Board of Education, under the administration of the Idaho State University.

The Idaho Museum of Natural History is located on the traditional territory of the Shoshone and Bannock Peoples.  It is important to recognize that most of us are guests in this territory and to counter the narrative that the land was uninhabited at the time of settler-colonization. The Shoshone and Bannock Peoples originally inhabited the lands in areas now known as California, Idaho, Nevada, Utah, and Wyoming.  Through U.S. policies of forced relocation and assimilation, the Shoshone and Bannock peoples' lands were reduced to small, geographically distant reservations in Idaho, Wyoming, Nevada, and Utah. The reservation along the Snake River in Idaho, established under the Fort Bridger Treaty of 1868 originally contained 1.8 million acres but was later reduced through allotment and legislation. Today, this region is still home to many Shoshone and Bannock Peoples who contribute to the local economy and culture. To learn more about the Shoshone-Bannock Tribes, please visit http://www2.sbtribes.com/about/.