The Idaho batholith is mostly composed of Cretaceous granite and granodiorite and covers approximately 35,000 km2 in central Idaho; it is roughly 320 kilometers long by 120 kilometers wide. 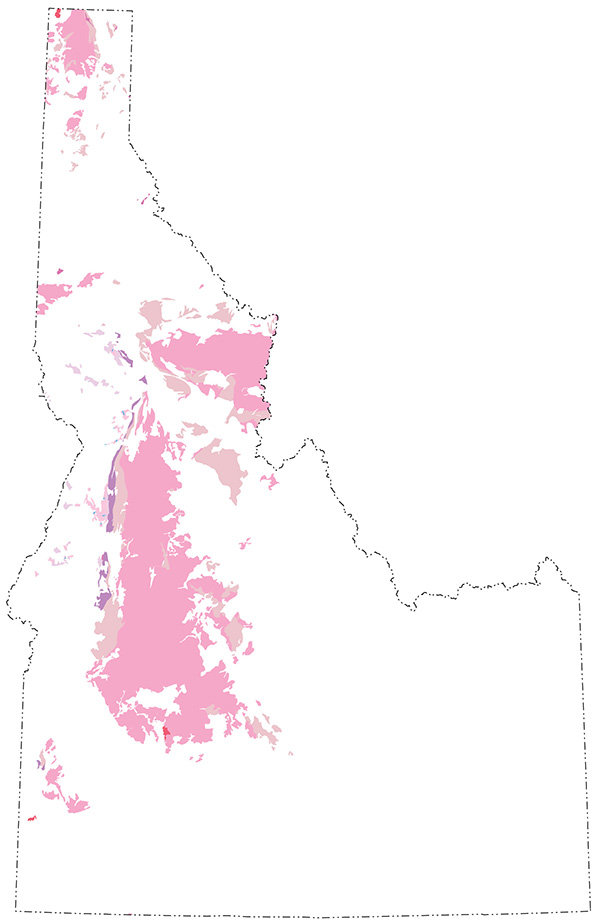 (Above) Exposures of Idaho batholith rocks in Idaho

The Atlanta Lobe and the Bitterroot Lobe of the Idaho batholith are separated by Middle Proterozoic Belt Supergroup metamorphic rocks in the Salmon River Arch/Elk City domain (Evans and Green, 2003; Gaschnig et al., 2013). The Atlanta lobe is older, 100 to 75 Ma., whereas the Bitterroot lobe is mainly 85 to 65 Ma.

The Idaho batholith forms a barrier to travel between northern and southern Idaho. Except for US 95, which follows the Salmon River suture zone through McCall and Riggins, there are no paved roads that cross the Idaho batholith from north to south. 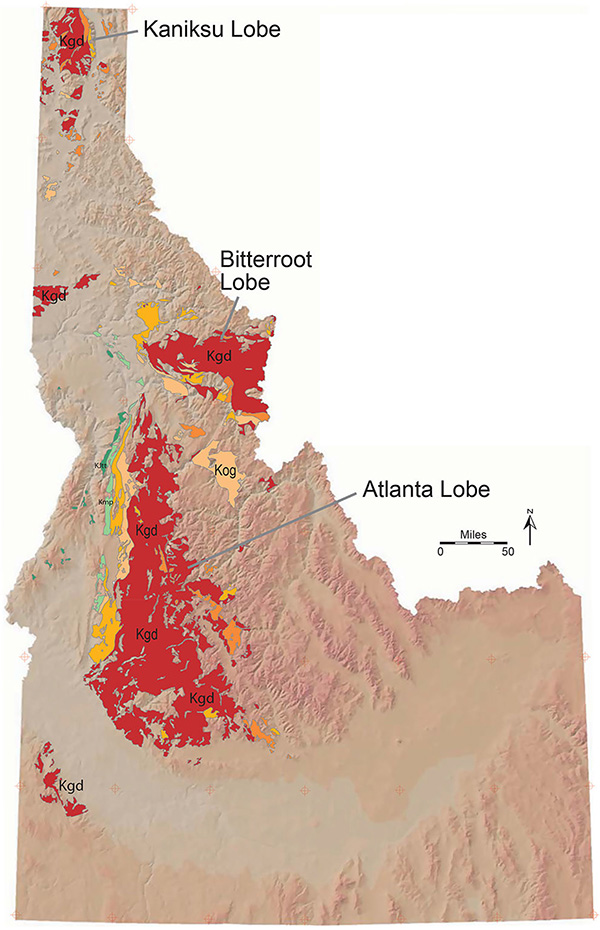 (Above) Map of Idaho showing the location of the lobes of the Idaho batholith.

The granitic rocks of the Idaho batholith--a component of the North American Cordillera--formed during Late Cretaceous ocean-continent subduction that led to development of the Sevier-Laramide orogenic belt. The oceanic lithosphere of the Farallon Plate was subducted beneath the overriding continental plate, which led to infiltration of water from the subducting slab into the overriding asthenosphere. This melting and the superheating of water that was also subducting formed basaltic magma chambers. These chambers rose up through the lithosphere because of differences in buoyancy. They then caused partial melting of overlying continental crust, to form a melt of granitic composition.

The magma bodies stopped approximately 4-25 km below the surface and cooled slowly (Lewis et al., 1987). The magma then crystallized into the granites and the granodiorites of the Idaho batholith. This process included many small magma bodies that formed one large mass when they coalesced. Cooling of the magma bodies over different rates and with different timing produced many different crystalline rock types and textures.

The rising of the magmatic plutons caused thickening of the crust beneath much of central and northern Idaho. At the same time, thrust faulting occurred to the east in the Idaho-Wyoming and Idaho-Montana fold-thrust belts, which dramatically thickened the crust, leading to the Sevier-Laramide orogenic belt. Isostatic rebound, mainly between 65 and 50 Ma caused erosion of the overlying rock exposing the Idaho batholith at the surface. Eocene Challis volcanic rocks (52-45 Ma) rest unconformably on the middle depths of the Atlanta lobe of the batholith, demonstrating this Paleogene exhumation. 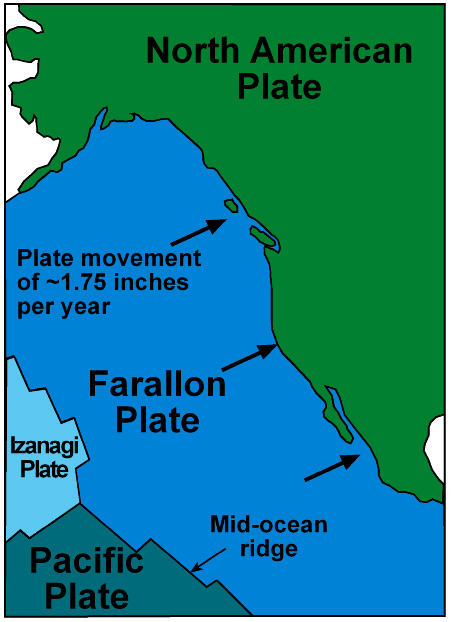 (Above) Plate tectonic configuration outboard of North American Cordillera at ~100 Ma (redrawn from Orr and Orr, 2002).

The Idaho batholith is one of a number of batholiths intruded into the upper plate during Jurassic to Eocene subduction of the Farallon Plate. The Idaho batholith was intruded into old continental crust of the Wyoming craton. This contrasts strongly with many of the other Cordilleran batholiths, such as the Coast Mountains batholith, which were emplaced into oceanic terranes that were previously accreted onto the North American plate margin. Because batholiths often melt and mix some of the surrounding crust during their emplacement, the Idaho batholith consists of relatively more felsic plutons compared to elsewhere along the Cordilleran margin.

(Left/Above) The 87Sr/86Sr 0.706 line represents an approximation of the location of the North American plate's margin prior to terrane accretion during the Sevier-Laramide orogenies. The Idaho batholith was emplaced entirely east of the 0.706 line into Archean and Paleoproterozoic crust of the Wyoming craton. This resulted in more felsic plutons of the Idaho batholith (granites) compared to many other Cordilleran batholiths (tonalites, granodiorites). 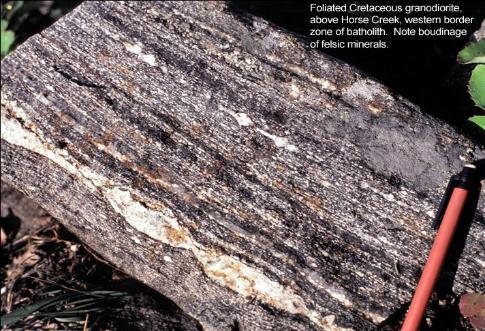 (Above) Closeup of foliated Cretaceous granodiorite within the Idaho batholith. 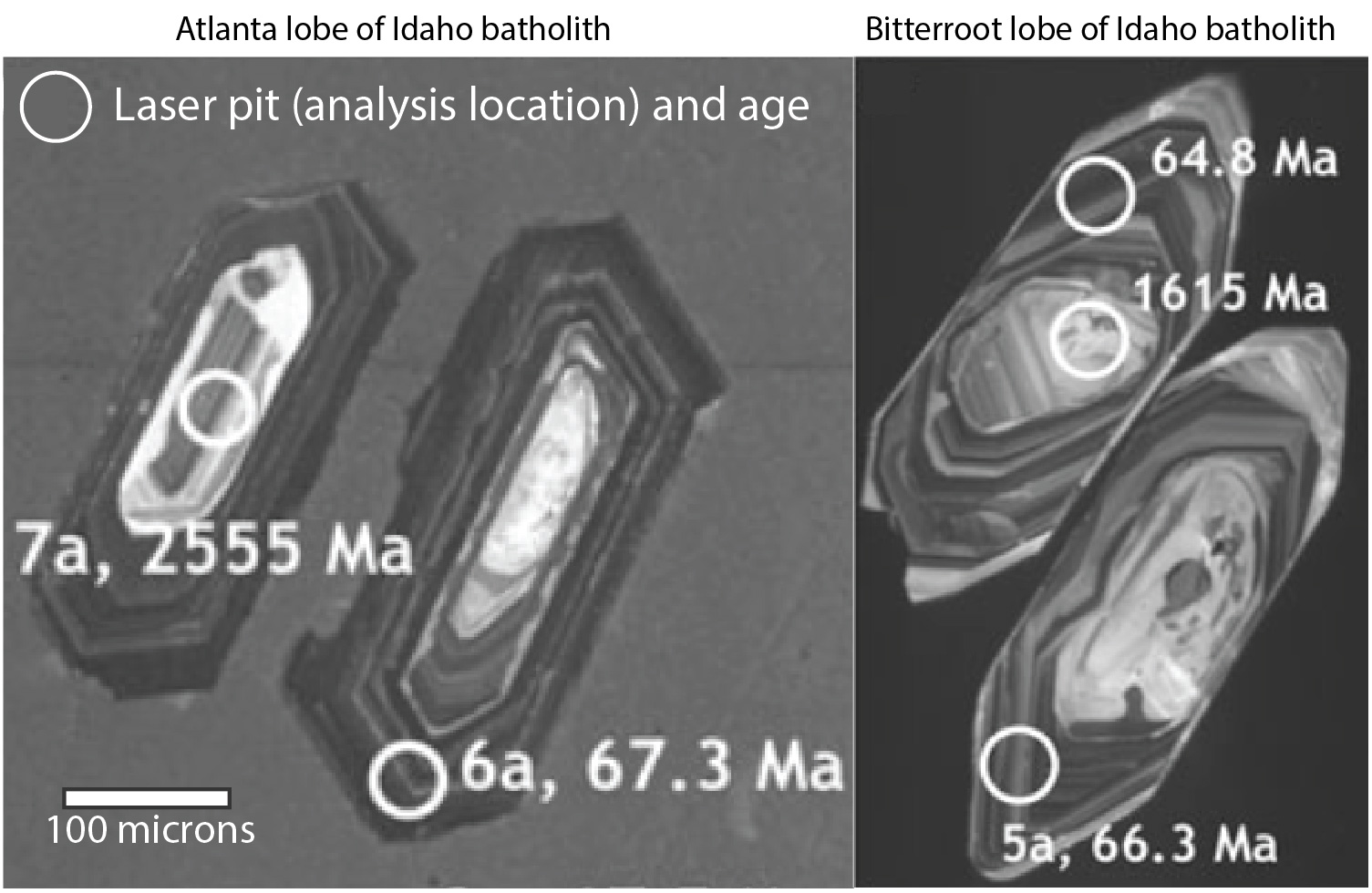 (Above) Scanning electron microscope (cathodoluminescence; CL) image of zircon grains and U-Pb radiometric dates from the two main lobes of the Idaho batholith (modified from Gaschnig et al., 2010). A 30 micron diameter laser was used to blast a hole in the zircon crystals, guided by the zoning observed in the CL images. For many grains in the Idaho batholith, zircon crystal cores have Proterozoic and/or Archean ages and demonstrate that some of the surrounding crust--into which magmas intruded--was melted and incorporated into the plutons.

Geology of the Idaho batholith

Early magmatism in the Idaho batholith occurred between ~98-87 Ma, and is primarily preserved in the western part of the Idaho batholith. The more voluminous Atlanta Lobe intruded between 83 - 67 Ma and the younger Bitterroot Lobe intruded between 66 - 53 Ma (Gaschnig et al., 2010). There is a general age-progressive trend from the southwest to northeast, coincident with eastward subduction of the Farallon Plate. Both lobes display compositional zoning from west to east.

The Atlanta Lobe contains six types of granitic rocks (King and Valley, 2001). The western boundary of the lobe is composed mainly of tonalite. Muscovite-biotite granite surrounded by biotite granodiorite form the core of the lobe. Other lithologies include hornblende-biotite granodiorite, porphyritic granodiorite, and leucocratic granite (King and Valley, 2001). The boundary between the tonalitic and granitic rocks coincides with the boundary between the Mesozoic Seven Devils volcanic arc including Paleozoic and Mesozoic oceanic rocks on the west juxtaposed with the continental Middle Proterozoic Belt Supergroup and crystalline basement rocks on the east side (Hyndman, 1983).

According to Hyndman (1983), the tonalites on the west side originated when melting of more mafic, upper mantle, or oceanic rocks occurred near the subduction zone. The granitic intrusive rocks on the east side of the Bitterroot Lobe and of the north and northeast side of the Atlanta Lobe developed by melting of Belt and pre-Belt basement schists and gneisses. The country rocks on the eastern side of the Atlanta Lobe include Paleozoic marine clastic sediments.

The eastern side of the Bitterroot Lobe consists of the Bitterroot metamorphic core complex. There is a mylonite zone on the eastern edge of the complex. Eocene-age hypabyssal dike swarms of basaltic and andesitic composition, parts of the Challis magmatic complex) are pervasive throughout both lobes along the Trans-Challis Fault Zone (Jordan, 1994; Alt and Hyndman, 1989). Eocene granitic plutons, slightly younger than the dominant dacitic volcanic and intrusive rocks intrude the Cretaceous granites within the Atlanta Lobe (Johnson et al., 1988; Jordan, 1994; King and Valley, 2001).

Wiswall, C. G., and Hyndman, D. W., 1987, Emplacement of the main plutons of the Bitterroot lobe of the Idaho Batholith, in Vallier, T. L. and Brooks, H. C., editors, Geology of the Blue Mountains Region of Oregon, Idaho, and Washington: The Idaho Batholith and its border zone, U. S. Geological Survey Professional Paper 1436, p. 59-72.