Idaho was the site of major crustal extension during two times in the Cenozoic period: (1) Eocene crustal collapse during Trans-Challis faulting, which was accompanied by formation of Cordilleran metamorphic core complexes; and (2) widespread Miocene to Present continental extension that characterizes the Basin and Range Province. 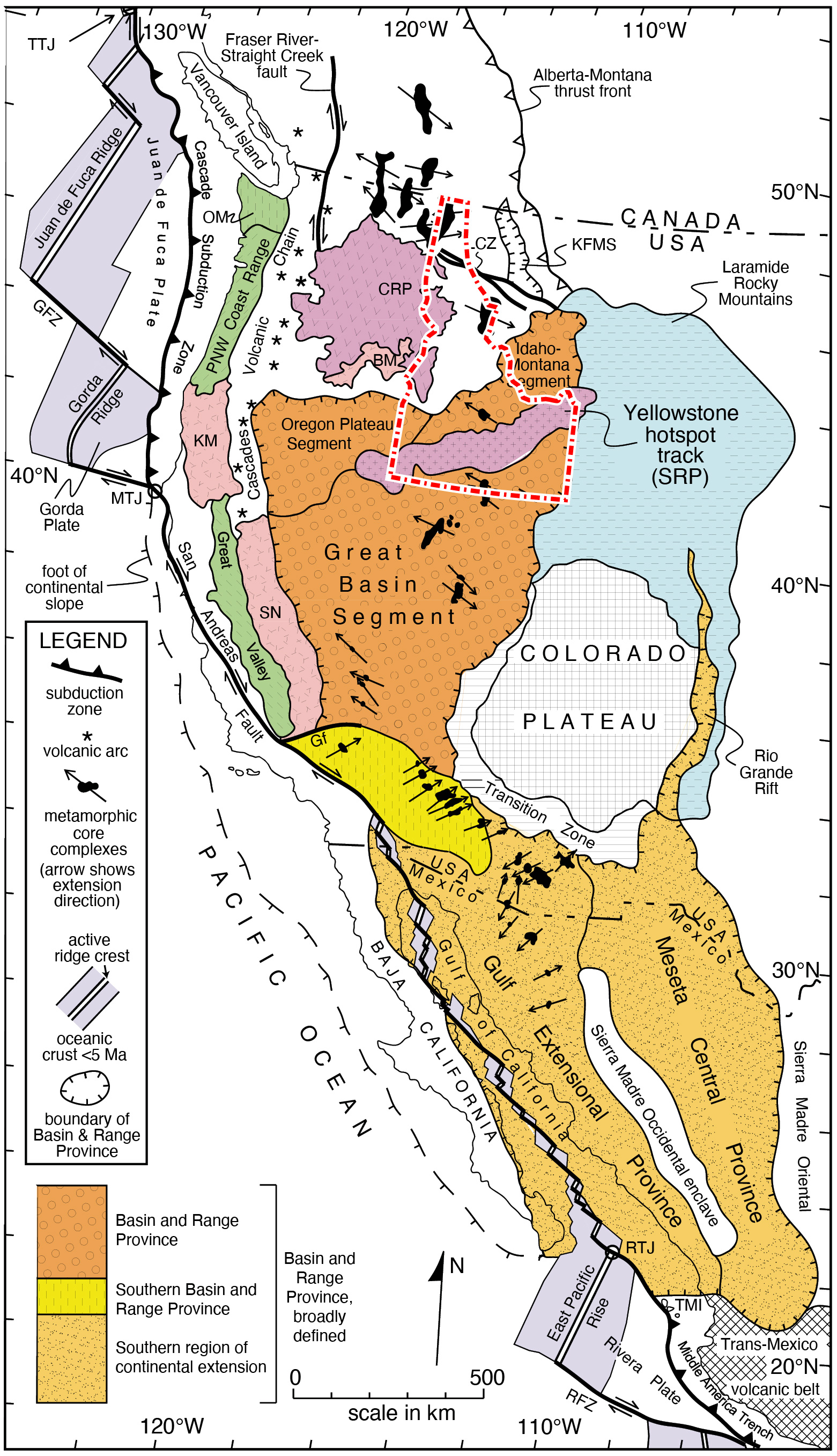 The early phase of extension resulted in formation of low-angle normal faults with high extension magnitudes (>15 km), which brought metamorphic rocks up to the surface. Crustal extension during this phase began in Eocene time in southern British Columbia and Idaho, and migrated southward into Miocene and younger times in the southwestern U.S.

The more recent phase of extension is generally Miocene and younger and characterizes the Basin and Range Province, which includes most of eastern California, eastern Oregon, eastern Washington, Nevada, western Utah, southern and western Arizona, southeastern and east-central Idaho, westernmost Wyoming, and southwestern Montana. The Basin and Range Province is characterized by active extension, ranging from a total of 50% or less to 200% extension of the pre-Basin and Range land area (Faulds and Varga, 1998). This extension occurs mostly along large normal faults.

At ~52 Ma, following the Sevier-Laramide orogeny, western North America was the site of a long mountain belt--the North American Cordillera--with thick, hot crust. During continued eastward subduction of remnants of the Farallon-Kula plates, mid-ocean ridges began to intersect the subduction zone, resulting in a transition from a subduction zone to a transform plate boundary. First, the ancestral Queen Charlotte transform plate boundary is thought to have developed; this major strike-slip fault system is now located outboard of western British Columbia. Later, the ancestral San Andreas transform boundary formed in the southwestern U.S.

Though the hot, overthickened crust of the North American Cordillera first began to gravitationally collapse in Late Cretaceous time--likely in a similar way to in the Tibetan Plateau and other large, convergent orogens (e.g., Dewey, 1988)--major crustal extension is thought to have begun in Eocene-Oligocene time in a region of very thick crust from southern British Columbia to central Idaho. This early phase of extension occurred at approximately the same time as development of the northern Queen Charlotte transform plate boundary and was concurrent with Challis magmatism and development of the northeast-trending Trans-Challis fault system. Some of the major normal faults formed during Eocene time in Idaho accommodated major horizontal extension, resulting in displacement of mid-crustal, basement rocks to the Earth's surface. In areas where the footwalls of these normal faults brought up metamorphic rocks from the middle crust and juxtaposed them against hanging walls of shallow crustal sedimentary and/or volcanic rocks, these fault systems are called "metamorphic core complexes." Metamorphic core complexes are also distinctive in that they often expose relatively shallowly dipping normal faults. Because most normal faults generally are steeply dipping, these low-angle normal faults have been the subject of research and controversy. Most workers agree that low-angle normal faults within metamorphic core complexes were originally more steeply dipping near the Earth's surface and were rotated to shallower dip angles, with continued slip rooting into shallowly dipping normal faults at deeper crustal levels.

(Above) One model for development of low-angle normal fault systems within metamorphic core complexes (modified from Kapp et al., 2008). 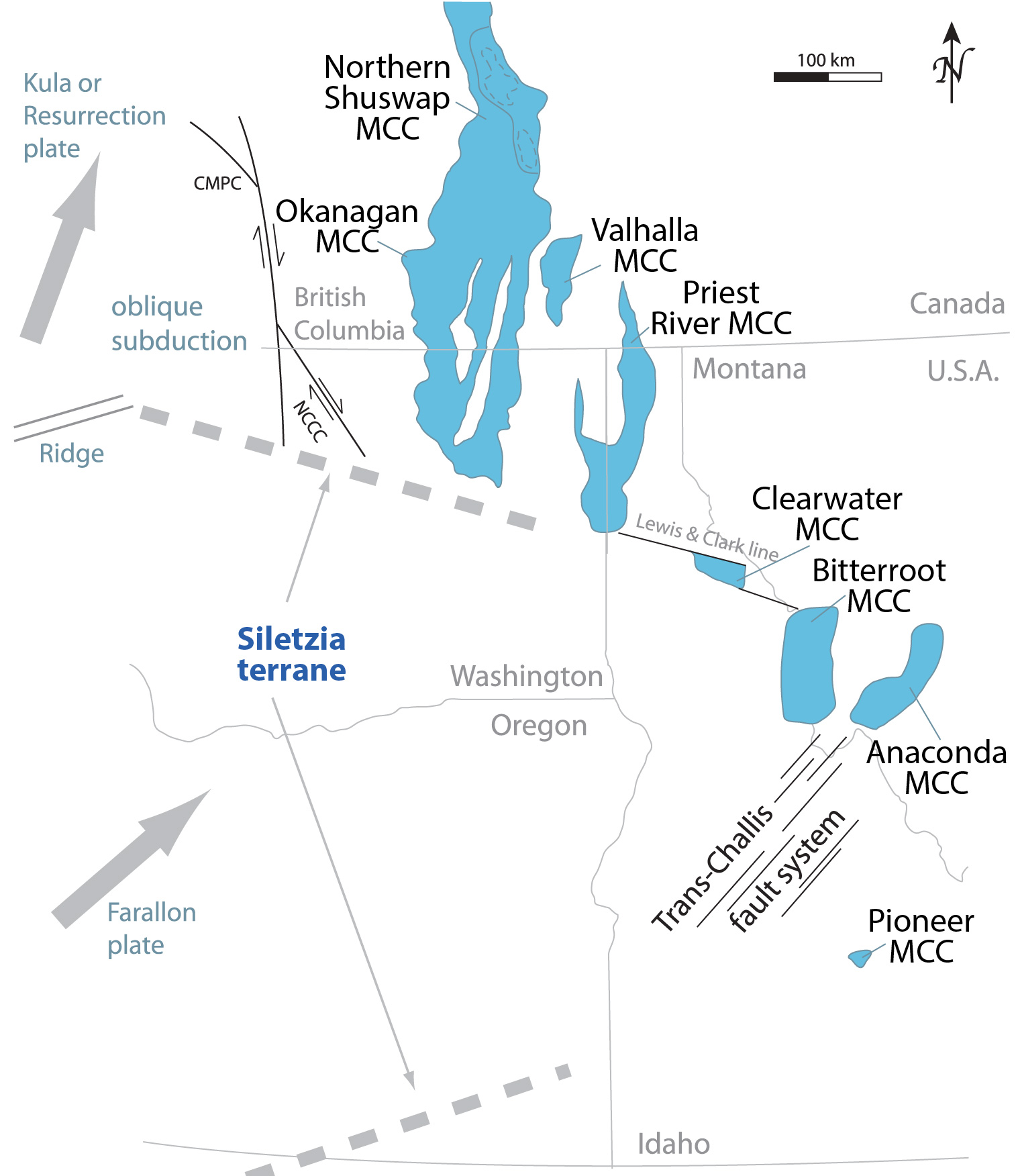 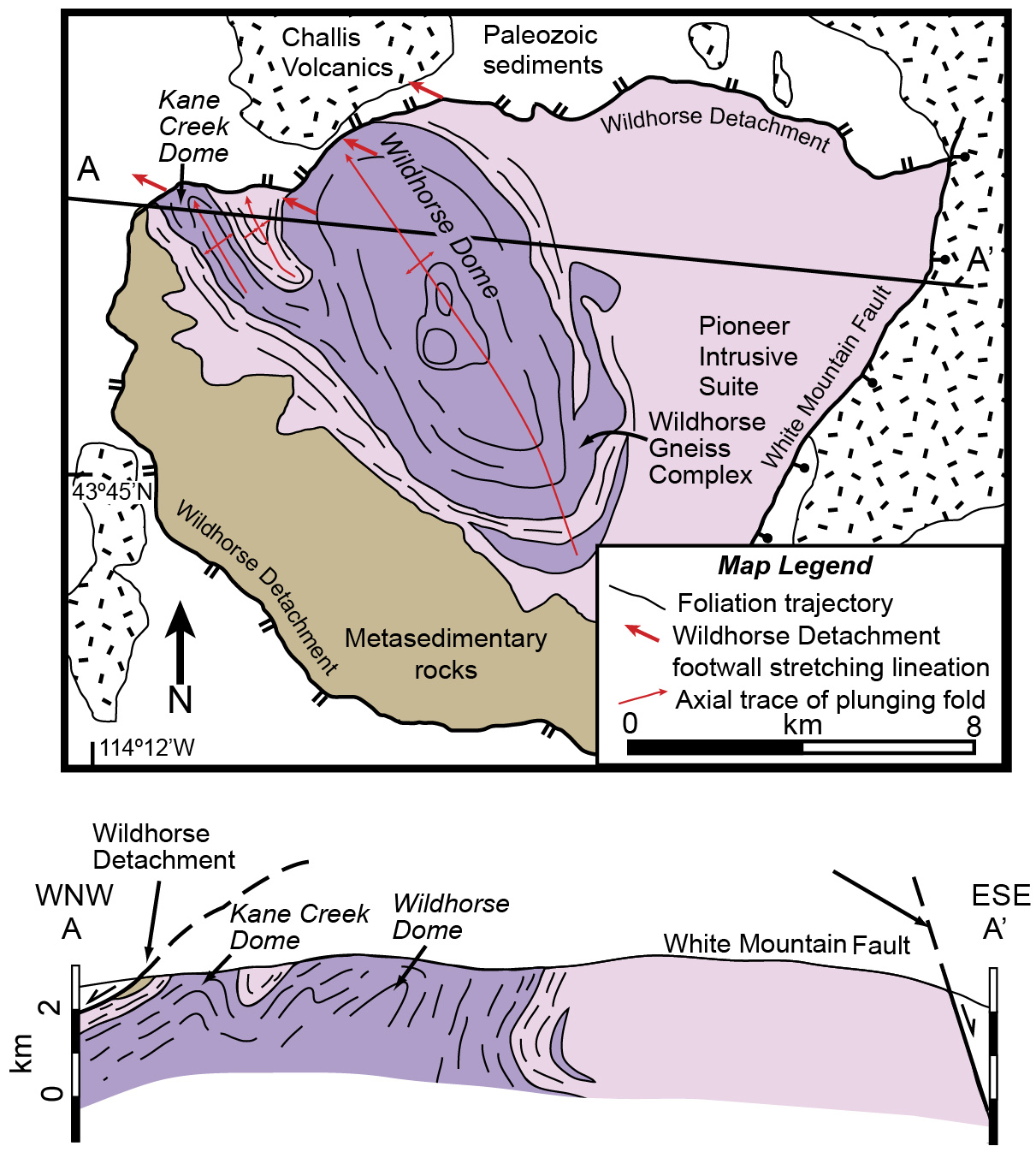 Basin and Range extension began during the Miocene Epoch (~17 Ma) and has continued through present, with the area of active extension propagating westward toward the Sierra Nevada, eastward into southeastern Idaho and westernmost Wyoming, and northward into the Yellowstone-southwestern Montana-east-central Idaho region. Crustal extension is a result of the transition from the older subduction zone to a more recent transform plate boundary, resulting in collapse of overthickened crust left over from the Sevier-Laramide orogeny. In eastern Idaho, Miocene and younger crustal extension within the Basin and Range Province was likely enhanced by crustal weakening associated with Yellowstone volcanism. 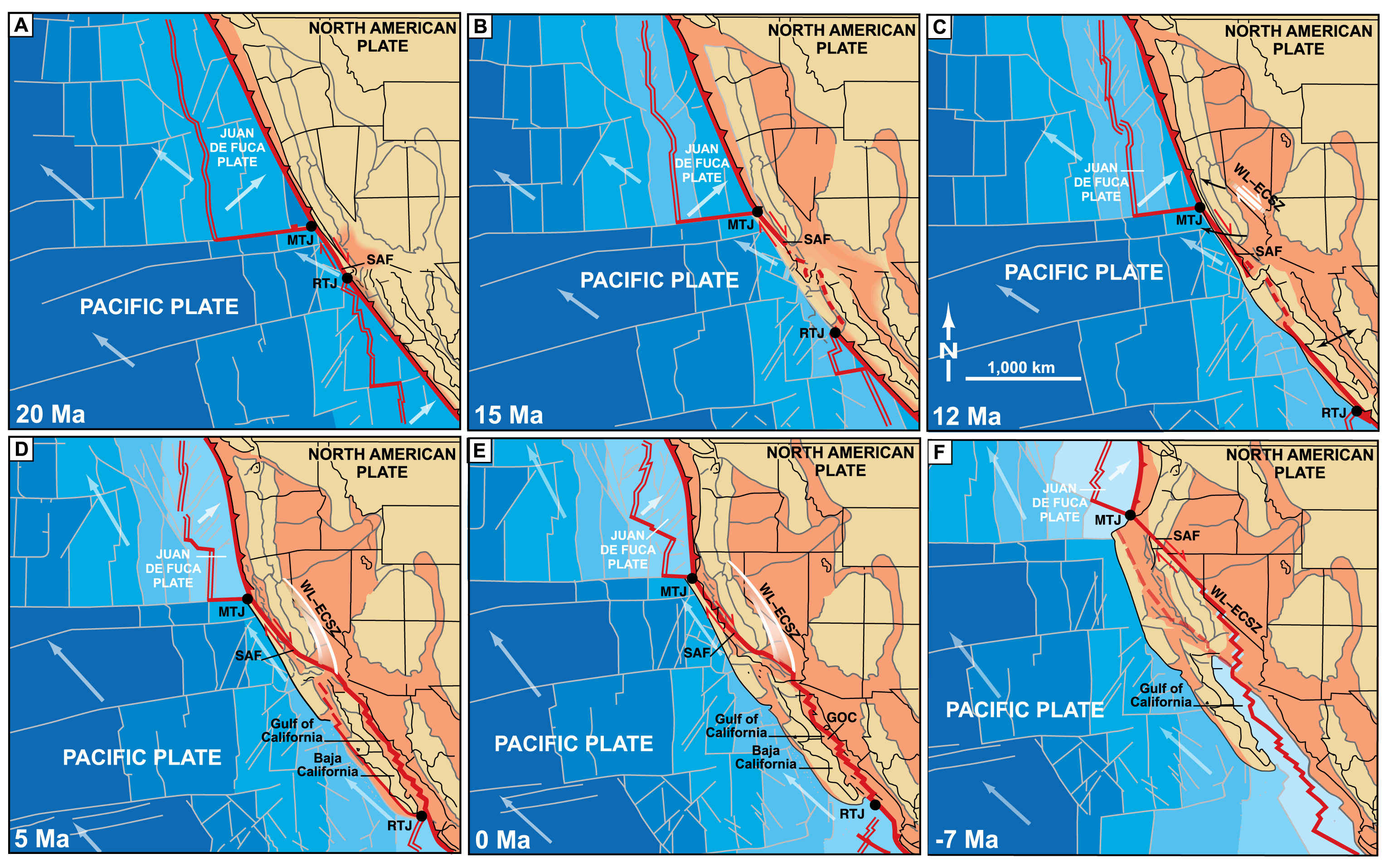 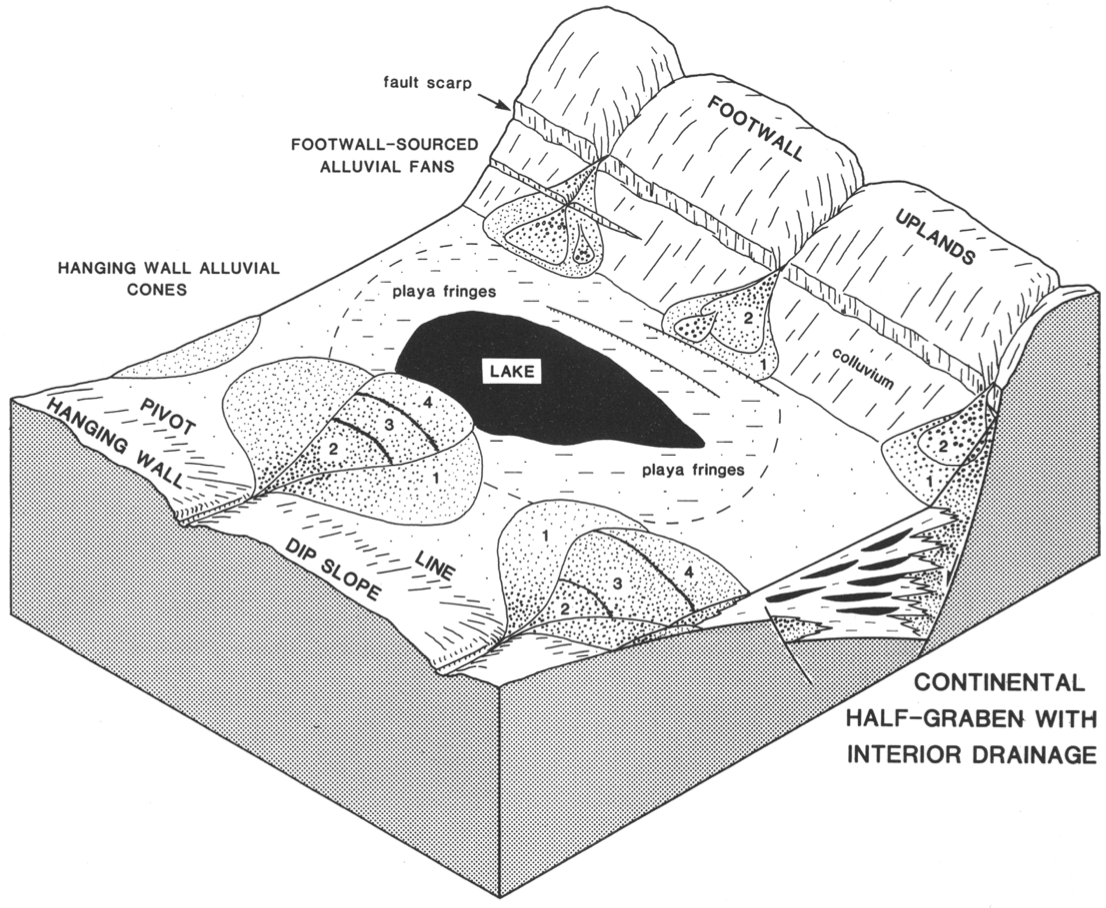 (Left/Above) Schematic perspective view of a typical half-graben fault system and hanging wall basin. Many of the Basin and Range faults in western North America have a similar geometry (from Leeder and Gawthorpe, 1987).

The most classic fault geometry within the Basin and Range province consists of steeply dipping (~60°) normal faults that shallow their dip angles with depths, a fault geometry called "listric." The Basin and Range province gets its name from the characteristic basins and ranges that occur next to each other, within half graben or horst-graben geometries. Down-dropping of normal fault hanging walls during major horizontal extension has resulted in low elevations and diversion of river systems into these depressions, often forming internally drained basins such as within the Great Basin.

Relationship of Basin and Range extension to transform plate boundary

Though the primary force driving Basin and Range extension is the gravitational potential energy remaining from thickened crust after the Sevier-Laramide orogeny, the Basin and Range Province is also linked to oblique continental rifting in the Gulf of California and accommodates up to 25% of the right lateral transform plate motion between the Pacific and North American plates (Atwater, 1970; Bennett et al., 2003). Within the western Basin and Range province in eastern California and northwestern Nevada, the Walker Lane and Eastern California shear zone show a mix of crustal extension and right-lateral strike-slip faulting that is the same orientation and sense as the San Andreas fault system. In the eastern Basin and Range Province, including in eastern Idaho, faults accommodate less strike-slip displacement and primarily accommodate east-west extension (Bennett et al., 2003). 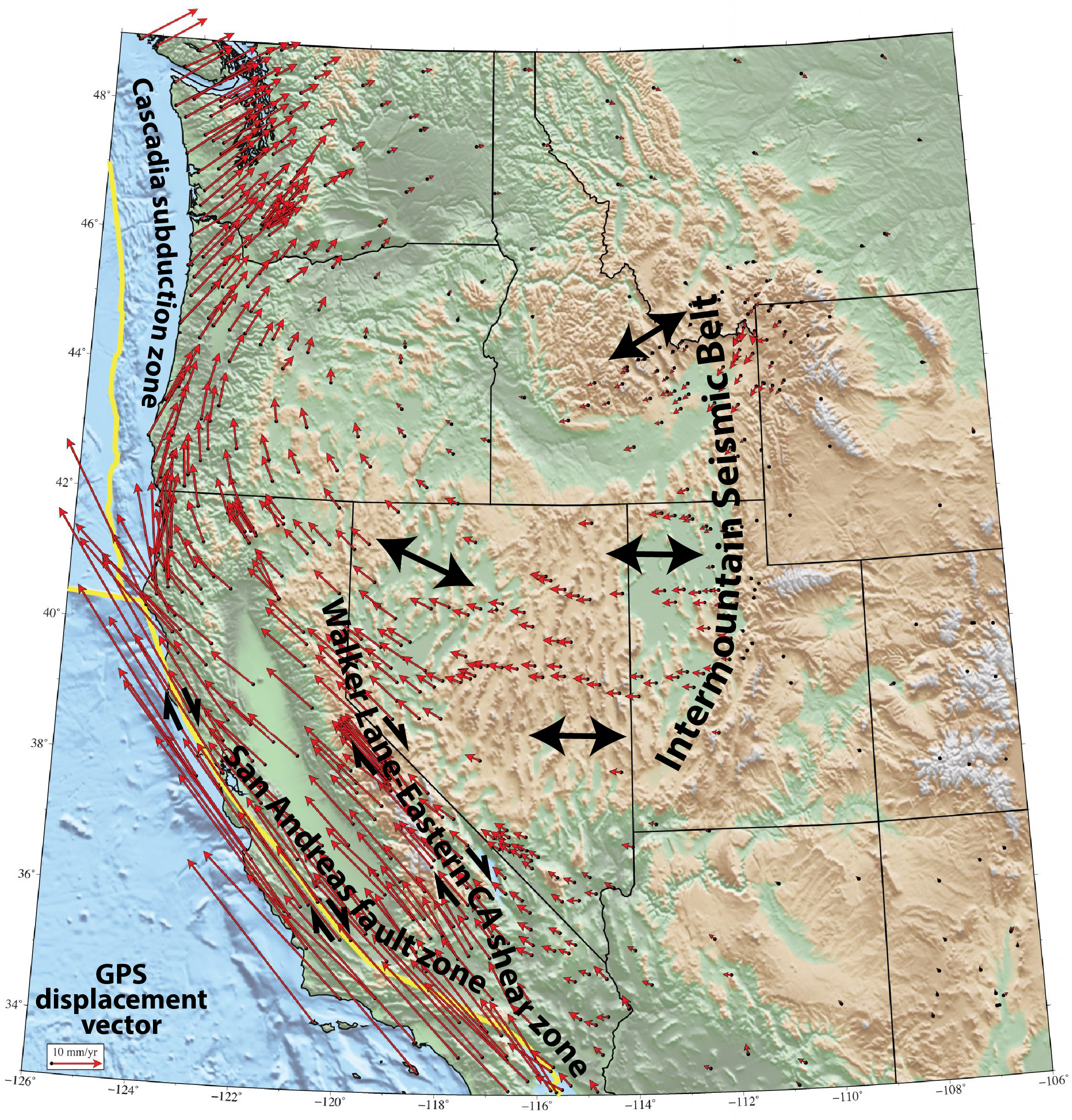 Basin and Range extension in Idaho 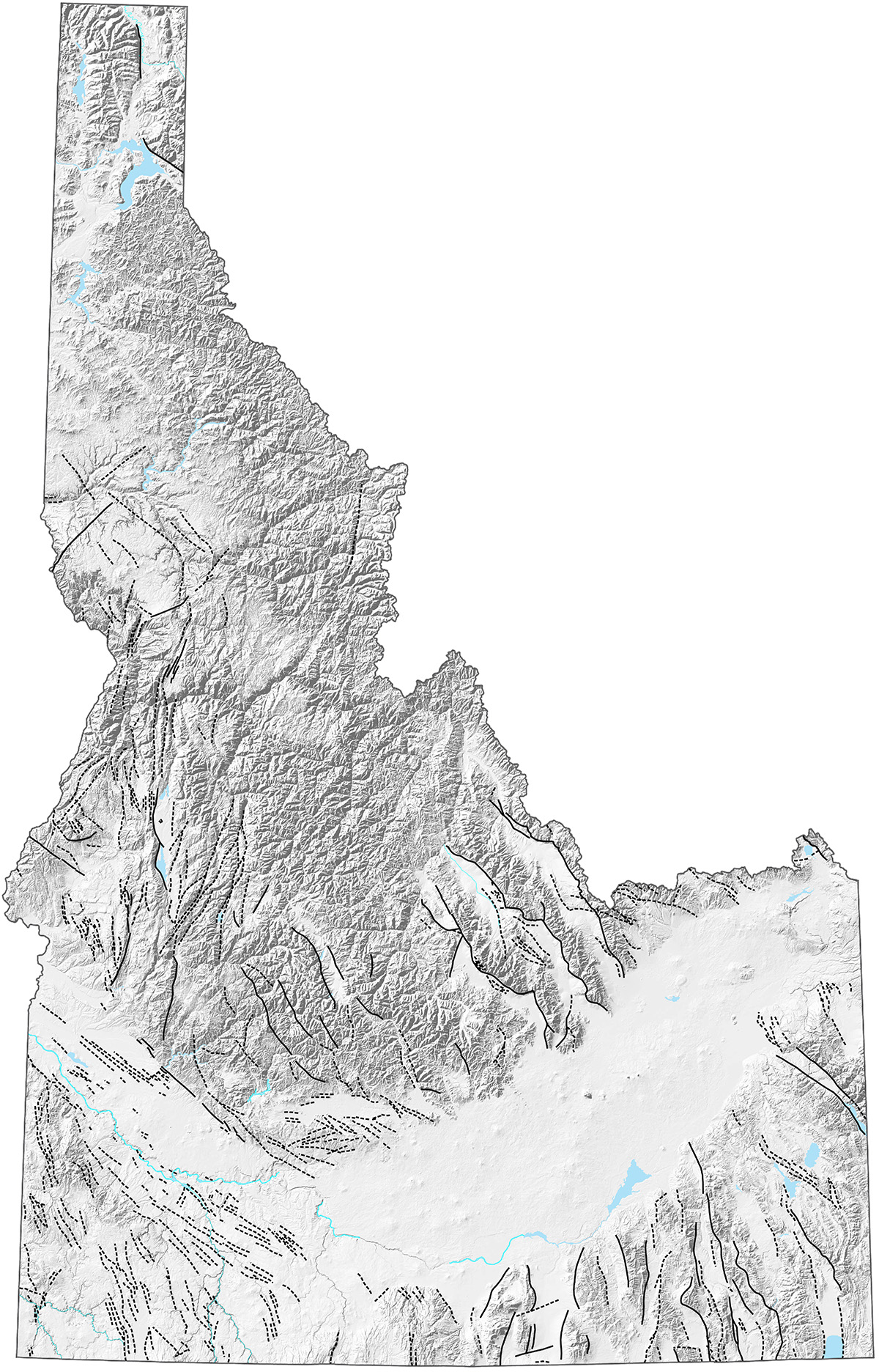 (Above) Map of normal faults in Idaho with fault displacement known to be younger than 16 Ma (black lines) (faults from Breckenridge et al., 2003). Soild lines are well-located and dashed lines are approximately located.

Idaho, Wyoming, and Montana host the northern limit of Basin and Range faulting. Many of the modern mountain ranges and basins in Idaho were formed by recent normal faulting, which has dropped down the basins and resulted in relative uplift of the adjacent mountain ranges. Some of these normal faults generate earthquakes when one side of a fault slips past the other. The most seismically active normal faults occur in southeastern Idaho and east-central Idaho within a broad region of late Cenozoic crustal extension called the Intermountain Seismic Belt, which is part of the Basin and Range province.

Most researchers do not consider the Yellowstone-eastern Snake River Plain volcanic system to have significantly affected development of the Basin and Range province. However, workers in the northern Rocky Mountains of Idaho, Wyoming, and Montana have documented enhanced rates of normal faulting that coincide with adjacent rhyolitic volcanism associated with the Yellowstone-eastern Snake River Plain volcanic system (e.g., Rodgers et al., 2002; Pierce and Morgan, 2009). 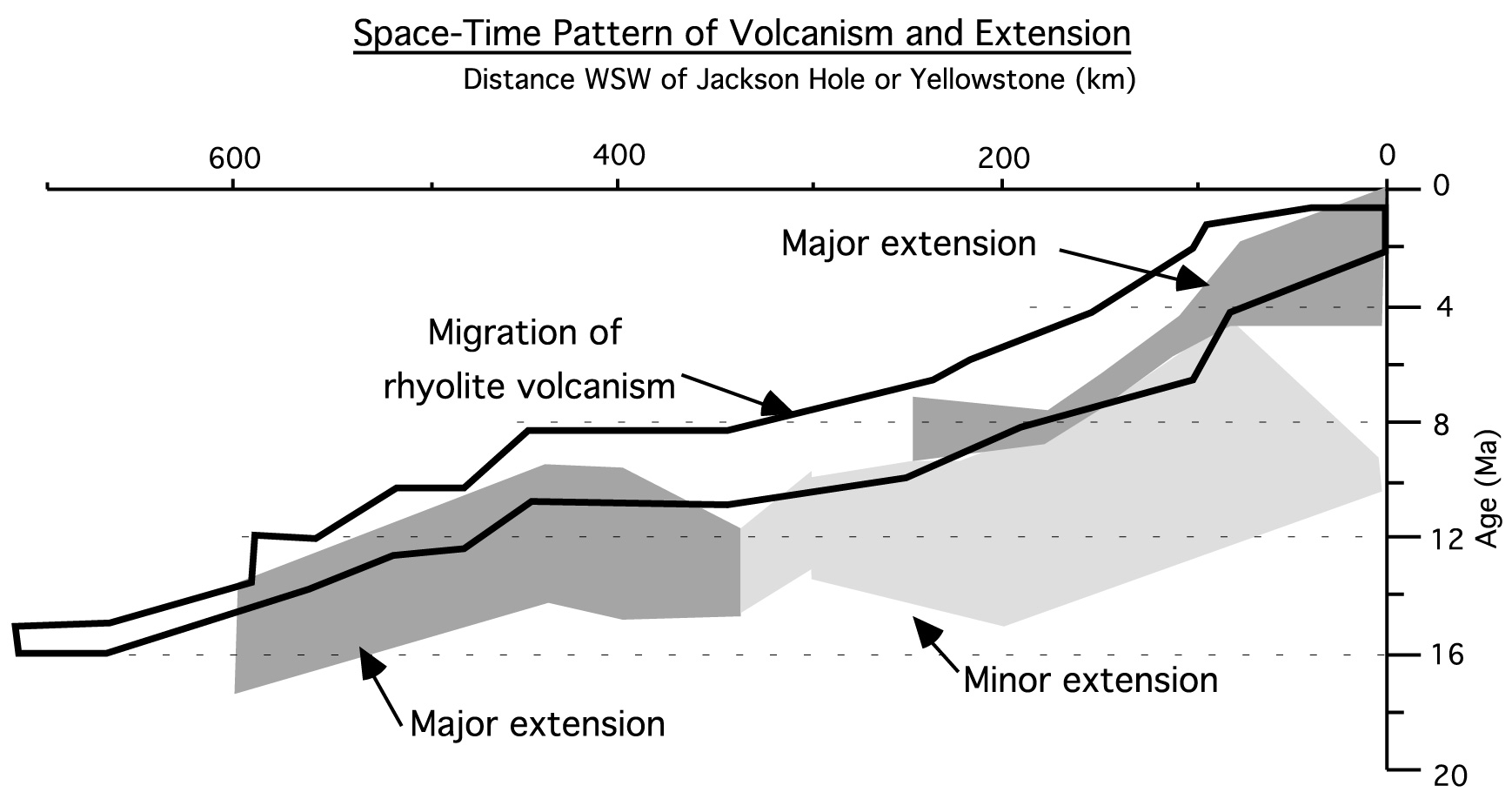 (Above) High rates of normal faulting in the northern Basin and Range Province of Idaho, Wyoming, and Montana coincide temporally with rhyolitic volcanism associated with the Yellowstone-eastern Snake River Plain volcanic system (modified from Rodgers et al., 2002). This relationship suggests that magmatism weakens the lithosphere and results in faster rates of upper crustal extension in this part of the Basin and Range. 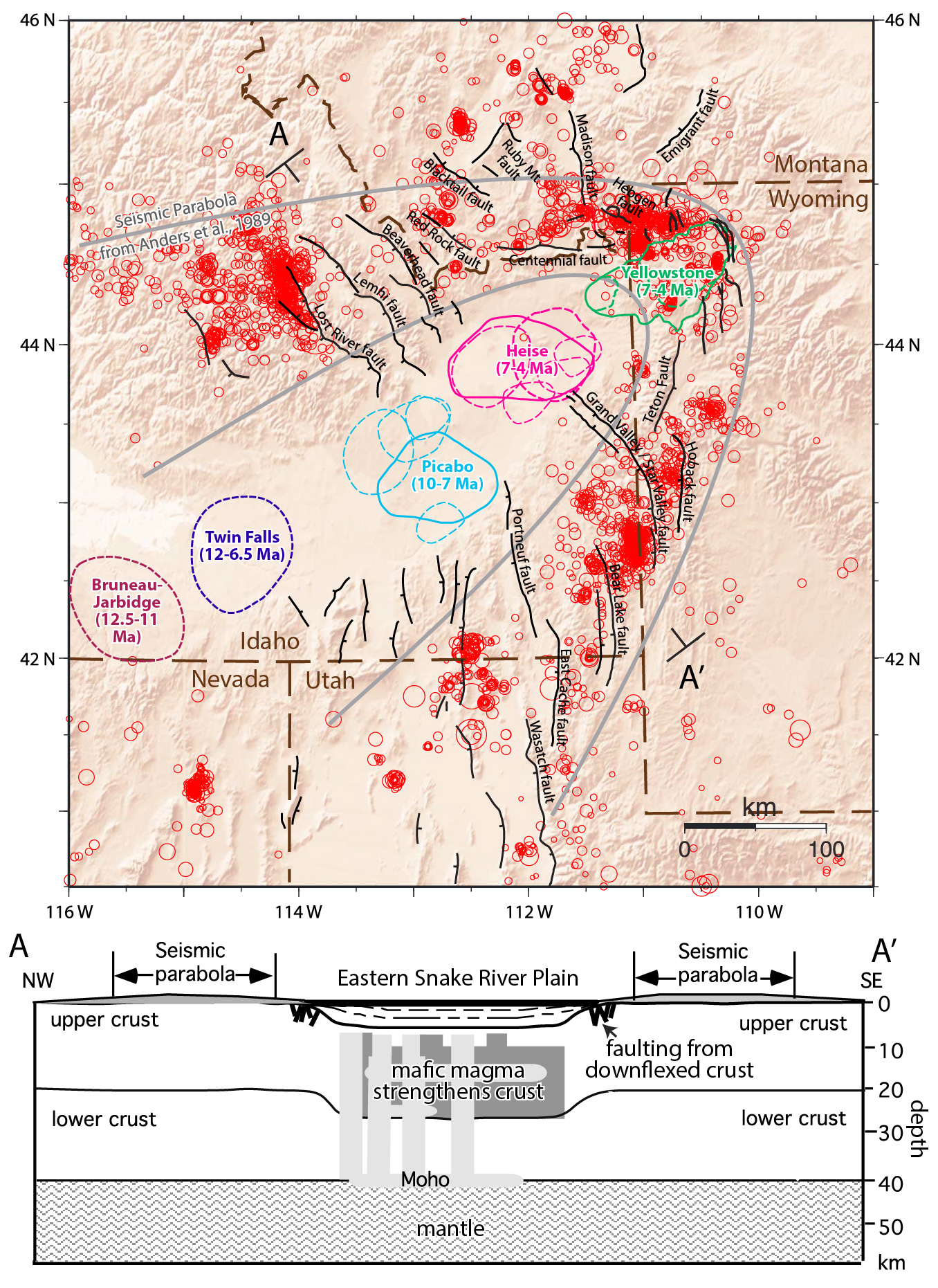 Basin and Range extension in Idaho

Pierce, K.L., and Morgan, L.A., 2009, Is the track of the Yellowstone hotspot driven by a deep mantle plume? — Review of volcanism, faulting, and uplift in light of new data: Journal of Volcanology and Geothermal Research, v. 188, p. 1–25.