Challis magmatism was active during Eocene time, between ~52-39 Ma, with the bulk of the eruption between 51-45 Ma. These rocks represent a widespread episode of Eocene magmatism that covered a large part of the Eocene northwestern United States and southwestern British Columbia. 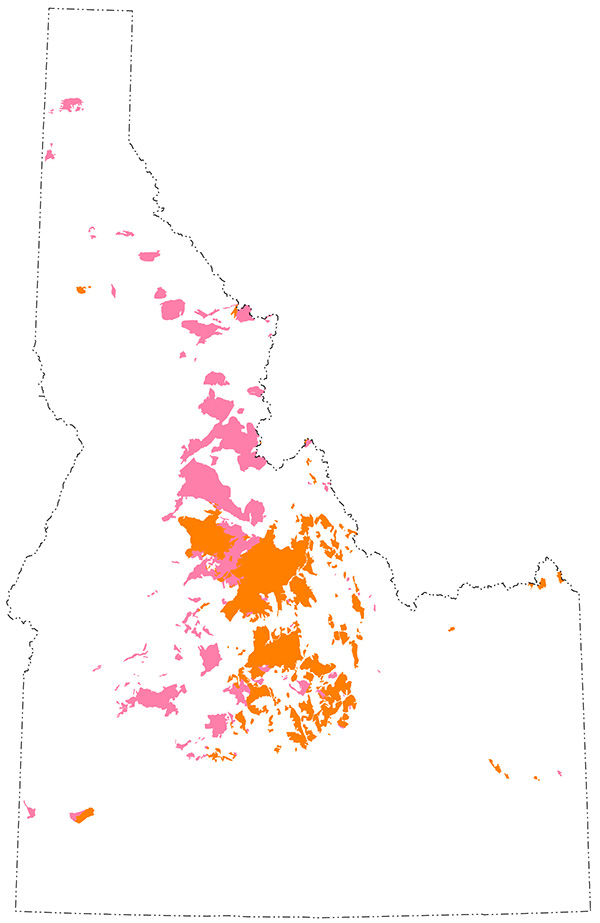 Throughout central Idaho, much of the Challis magmatism is preserved as volcanic rocks, but intrusive equivalents are also exposed as plutons adjacent to and east of the Idaho batholith.

The Challis Volcanic Group covers approximately 25,000 square kilometers in Idaho, making it the largest of the Eocene volcanic fields. The Eocene geologic setting of the Challis volcanics is commonly accepted as an extensional basin related to the subduction of the oceanic Farallon Plate beneath the continental North American Plate. However, the tectonic importance of the Challis Volcanic Group is still poorly understood.

Prior to Eocene time, before ~60 Ma, the convergence rate of the Farallon and North American Plates was very fast. From approximately 90-55 Ma, a northeast-trending region of the subducting Farallon plate developed a shallow dip angle, plowing into the overriding North American Plate from southern California to Colorado and promoting activation of "Laramide," basement-involved thrust faults within the continental interior of North America (Saleeby, 2003). Farther north in Idaho and Montana, continued magmatism within the Idaho batholith suggests that Farallon Plate subduction beneath that region may have continued at a relatively steep dip angle. After ~55 Ma, the shallowly subducting plate to the south started to steepen again, and a "sweep" of magmatism occurred throughout the western United States.

Following the southwestward steepening of the subducting slab, backarc extensional basins developed, thinning the overthickened crust leftover from the Sevier-Laramide orogeny. In Idaho, this triggered widespread igneous activity and northeast-southwest trending extensional fault system characterized by many high-angle and low-angle normal faults, which commonly dip toward each other, and form rift-grabens. These normal faults make up the Trans-Challis fault zone. Challis magmatism occurred during this phase of extension, at the same time as metamorphic core complexes. 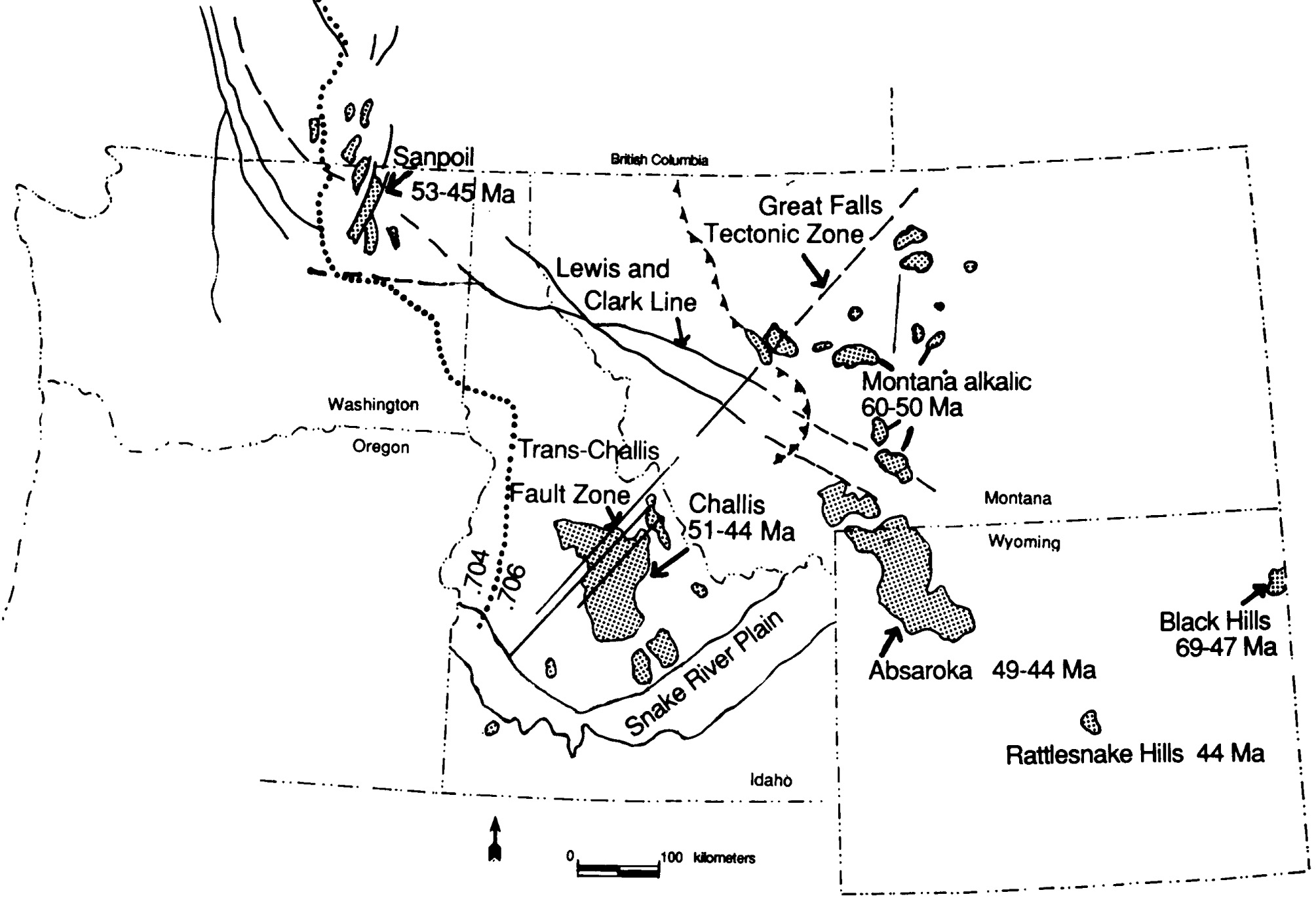 (Above) Eocene volcanic belt in the northwestern United States (from Moye et al., 1988). Major volcanic fields are labeled, showing approximate age span of most intense volcanism. Regional structures are shown in relation to distribution of volcanic fields; Trans-Challis fault zone is from Bennett (1986) and Great Falls tectonic zone is from O'Neill and Lopez (1985).

Igneous activity occurred in two main phases. The first phase began around 52 Ma and included the intrusion of shallow granitic plutons 3 – 4 miles below the surface. The second phase included volcanic eruptions. The main phase of eruption occurred between 51 – 45 Ma, and consisted of effusive and voluminous intermediate and mafic lava flows as well as highly explosive silicic ash-flows. Less violent and less voluminous silicic eruptions continued until approximately 39 Ma. Intrusive activity in the form of rhyolitic domes, rhyolitic plugs, rhyolitic dikes, and rhyolitic stocks accompanied the later stage volcanism. The violent eruptions of rhyolitic ash tuffs and ignimbrites caused the collapse of many calderas between 49 – 45 Ma. 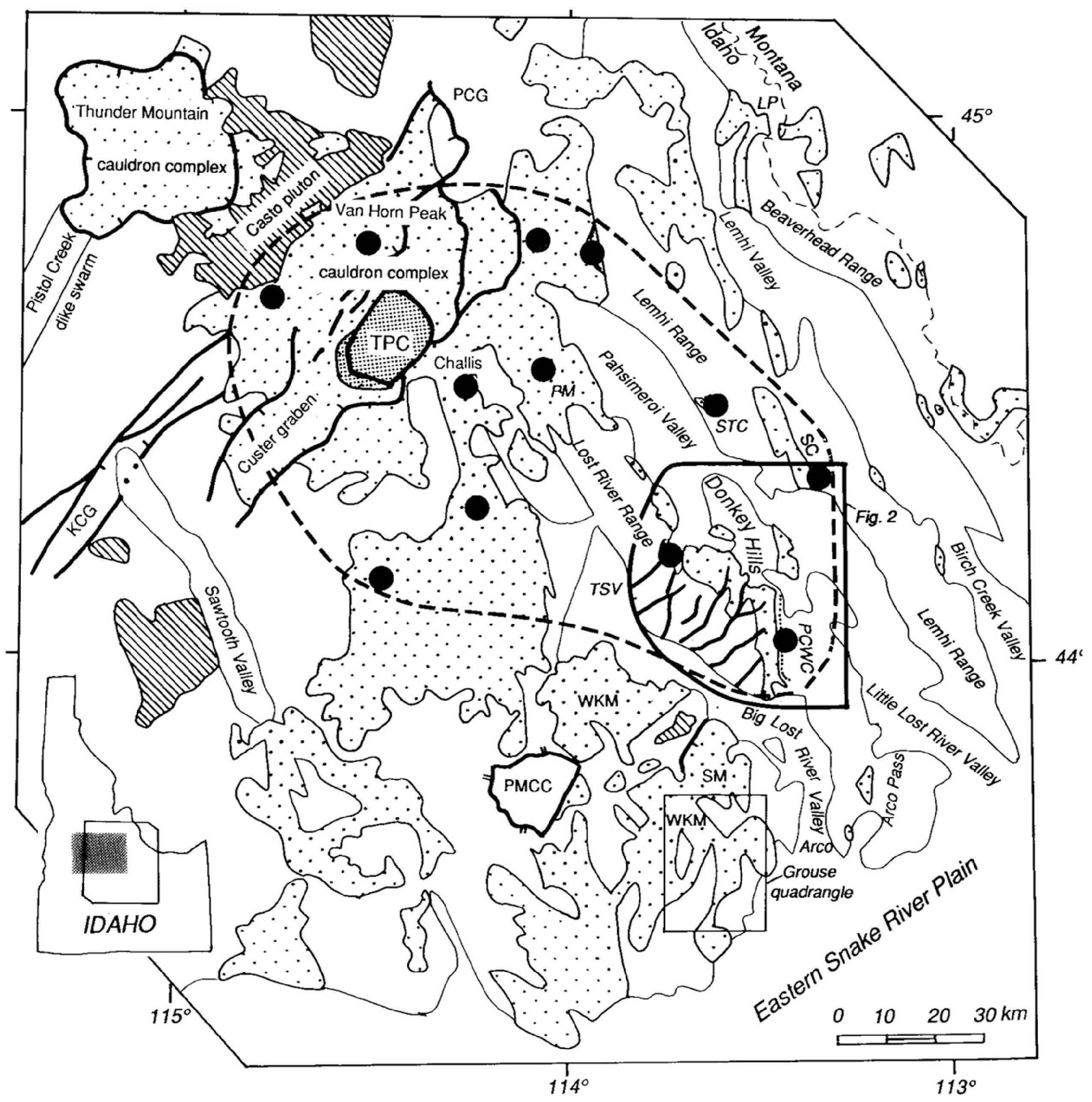 Upon collapse between 49 – 45 Ma, two of the calderas, the Van Horn Peak and Twin Peaks caldera complexes formed a linear graben oriented in a northeast-southwest direction that corresponds to the most eruptive part Trans-Challis fault zone (see figures). 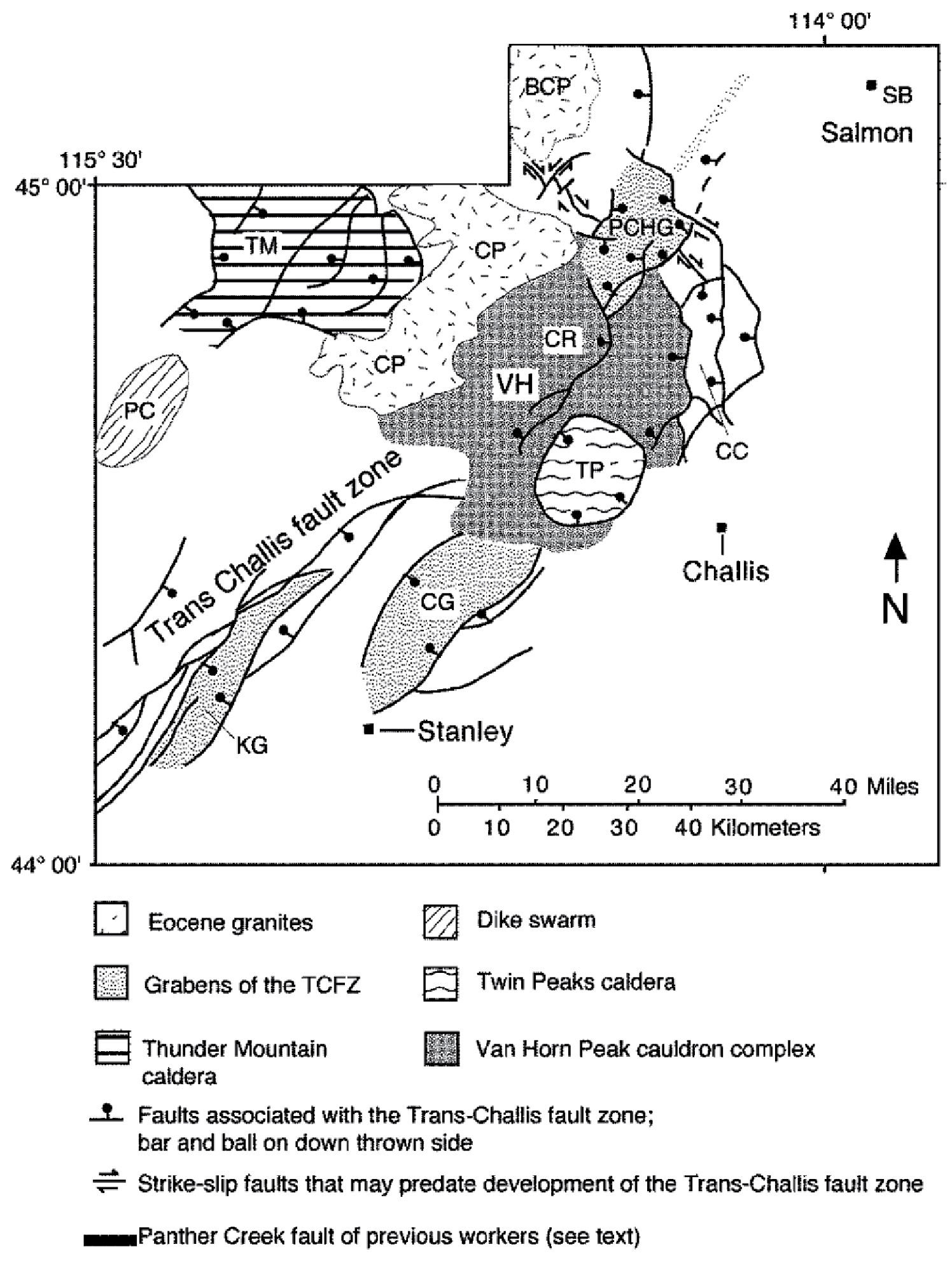 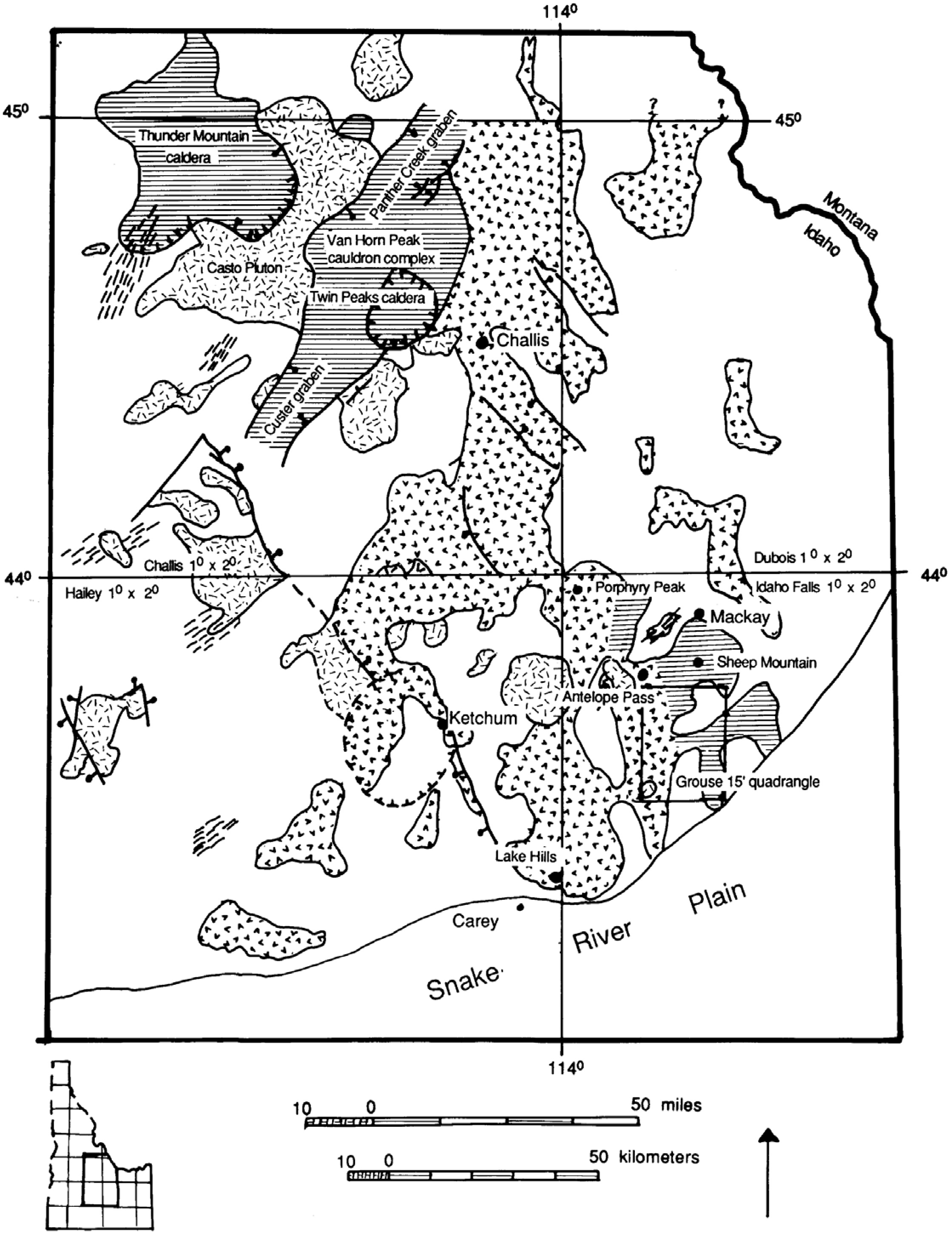 The southern Challis field stratigraphy is divided into four packages:

Volcanic rocks in the northern Challis field are subdivided into three packages: 1. intermediate to mafic rocks, 2. rhyodacite to rhyolite ash-flow tuffs, and 3. rhyodacite to rhyolite domes and plugs. The intermediate to mafic rocks contain dacite with phenocrysts of plagioclase, pyroxene, and/or amphibolite and biotite, as well as andesite to basalt with phenocrysts of pyroxene or olivine and plagioclase.

These intermediate to mafic rocks are early stage Challis Volcanic Group, and are mostly found in the northern and central areas of the northern Challis volcanic field. Rhyodacite and rhyolite ash-flow tuffs erupted from the Van Horn Peak caldera complex, the Thunder Mountain caldera, and the Twin Peaks caldera. Explosive eruptions caused caldera collapse, which can be recognized by thick ignimbrites within the caldera boundaries and thinner surrounding units. The tuff of Ellis Creek is the largest of these ash-flow tuffs, with thickness up to 400 meters outside of the Van Horn Peak caldera, and up to 1,500 meters within the caldera. The last igneous activity in the northern Challis field was the emplacement of rhyolite to alkali rhyolite domes and the intrusion of the granitic Castro pluton. 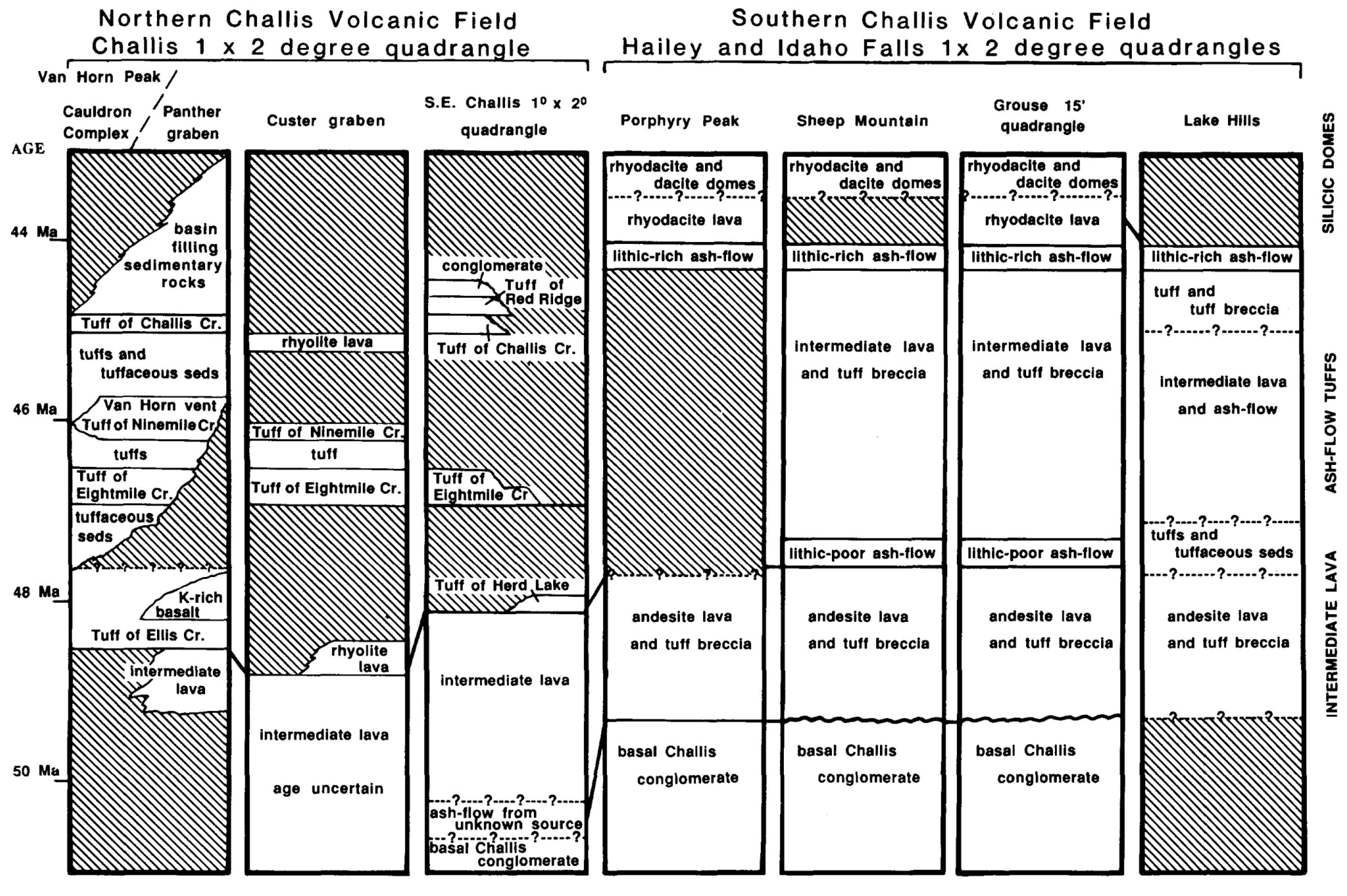 The basal conglomerate is named the Smiley Creek Conglomerate and can be found in the southern part of the Southern Challis Field. It ranges between unconformable to locally conformable with the overlying Challis Volcanic Group, indicating that deposition occurred during local onset of Challis volcanism. The Smiley Creek Conglomerate is significant because it helps define age constraints on early Challis volcanism. It also helps to define pre-Challis paleotopography. The bottom volcanic unit contains andesitic lava flows and tuff breccias. The andesite lavas contain phenocrysts of olivine and clinopyroxene, with minor plagioclase; more felsic lavas contain hornblende or orthopyroxene.

These units are widespread in the southern Challis field, however they vary in thickness due to deposition over paleotopography, with flows up to 700 meters thick in paleovalleys. The dacitic and rhyodacitic ash flows and lava flows are the most voluminous units in the southern Challis field. This part of the volcanic stratigraphy contains, from bottom to top: lower andesite to rhyodacite ash-flow tuff and tuff breccias, lower rhyodacite to dacite lava flows, upper rhyodacite ash-flow tuffs, and upper rhyodacite lavas. This volcanic stratigraphic package contains compound and multiple-flow units, indicating many different explosive eruptions. These eruptions have not yet been traced back to calderas, and are thought to be primarily erupted from fissures and several other local eruptive centers. As in northern Challis field, the southern field contains late-stage dacite and rhyolite domes and associated lava flows. 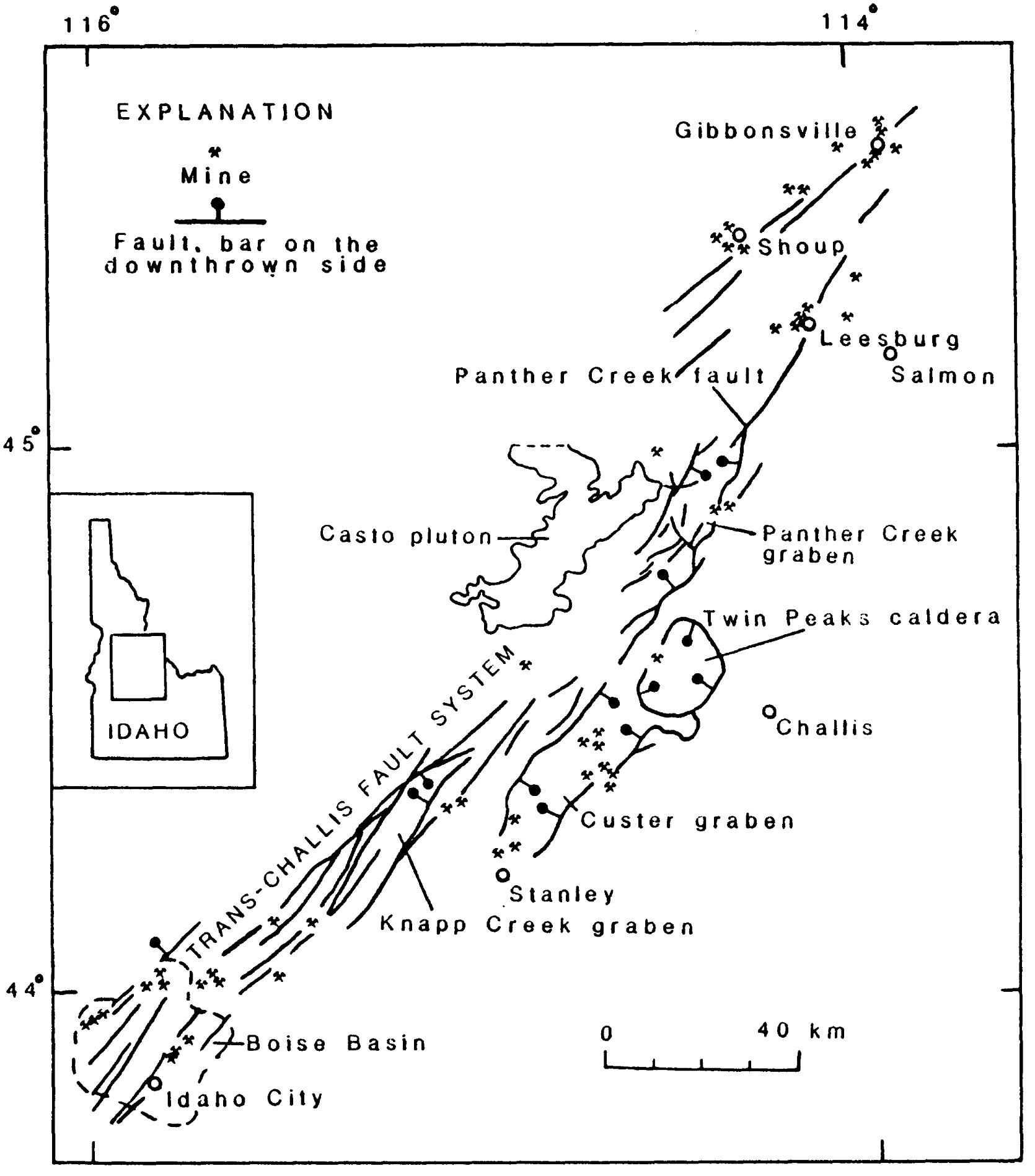 Mineralization within the Challis Volcanic Group is associated with volcanic and plutonic activity, such as the emplacement of the domes and plutons, caldera collapse, and widespread hydrothermal activity. Regional structures, such as faults and fractures, domes, and grabens, controlled the locations for vein-filling precious metals and hydrothermal activity. The most profitable materials mined from the Challis Volcanic Field include gold, silver, copper, lead, zinc, flourspar, uranium, and building stone. Also emplaced due to Challis igneous activity were beryllium, thorium, molybdenum, tin, mercury, and antimony. The map below shows locations of productive gold and silver deposits, which have been mined along the Trans-Challis fault zone (Figure 6).

(Left/Above) Map showing the locations of productive gold and silver deposits, which have been mined along the trans-Challis fault zone (from Johnson et al., 1988).

Continue to Module 9 - Basin and Range

McIntyre, D. H., Ekren, E. B., and Hardyman, R. F., 1982, Stratigraphic and structural framework of the Challis Volcanics in the eastern half of the Challis 1 x 2 degree quadrangle, in Bonnichson, B. and Breckenridge, R. M., eds., Cenozoic Geology of Idaho: Idaho Bureau of Mines and Geology Bulletin 26, p. 3-22.