POCATELLO - October 6, 2021
Note: This story was written by John O'Connell and originally published in the Idaho State Journal.
Sasha Heyneman initially mistook the young woman who was lying in the lawn of an area rehabilitation center on a frigid Thursday night for a halloween decoration that had fallen from a tree. 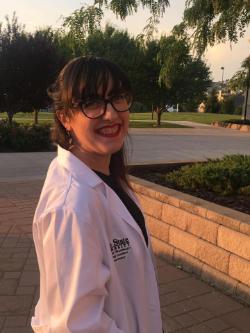 It was after 10 p.m. when Heyneman, 29, and her partner, Arthur, were driving to her parents’ home to pick up her dog, Washburn. On their return trip, as they passed the rehabilitation center at 5230 W. Moonlight Mine Road, Heyneman noticed the bare arm of the figure in the lawn.

The fourth-year Idaho State University pharmacy student then stopped and put her medical training to work, almost certainly saving the life of someone who was overdosing on opioids.

Heyneman asked Arthur to remain in the car with the window down, believing a man’s voice might frighten the woman. Though the temperature was about 35 degrees, the woman was dressed only in pants and a T-shirt. She was unresponsive and wasn’t shivering, which worried Heyneman.

“I was cold enough to be shivering and I had a jacket on,” Heyneman said. “She must have been so cold out there.”

Heyneman initially spoke softly to the young woman. Then she raised the volume to a shout, seeking to rouse the young woman’s attention. Still there was no response.

Heyneman ran to the door of the rehabilitation center, where she could hear the TV inside. A certified nursing assistant answered the door. The CNA and another member of the household came outside to investigate and confirmed the young woman was not a resident.

Some residents helped the woman walk inside. She was stumbling and her eyes were lulling.

“With my training I recognized it could be a possible opioid overdose,” Heyneman said.

She directed the residents to find their first-aid kit and bring her some Narcan — a medication used in treating opioid overdoses. When some of the residents were hesitant, Heyneman explained that administering Narcan would pose no additional risk if she were wrong about in her assessment of an opioid overdose.

The CNA administered the Narcan nasal spray. Heyneman said the CNA remained calm and was well prepared for the situation. Within about 30 seconds, the young woman was regaining coherence, answering some basic questions. The residents called 911.

Heyneman has been working as an intern at Madison Memorial Hospital in Rexburg. Earlier that day, Heyneman was called to make an emergency infusion at the hospital. She was so nervous her hands were trembling. She felt calm and didn’t hesitate, however, throughout the entire ordeal with the young woman.

Officials with the Bannock County Sheriff’s Office have confirmed the investigation into the young woman’s situation is closed. Sheriff Tony Manu credited Heyneman with her composed thinking.

“I think it’s pretty heads up for her. Obviously she knew what to do,” Manu said.

The sheriff added that opioid overdoses are happening “more and more.”

Heyneman’s mother, Catherine Cashmore, is extremely proud of her daughter and considers it fortunate that she chose that moment to pick up Washburn.

“How many people would have stopped? She stopped and went out and checked,” Cashmore said. “There’s just not that many people who would do that.”