Incoming Idaho State University President Kevin Satterlee said during his first news conference that his administration will be one of passion, communication and transparency.

“To everyone here today, thank you. We’re going to do great things,” he said. “This University has known great times, but its greatest times are yet to come.”

The Idaho State Board of Education named Satterlee as the 13th president of Idaho State University on April 5.

State Board of Education Member Richard Westerberg said the Board was looking forward to working with Satterlee to bring Idaho State University to the next level. He described Satterlee as a man who was born, raised and educated in Idaho, and a man with great vision.

“He’s an innovator, and he’s a great communicator,” Westerberg said. “He listens to understand, and to learn, which leads to his ability to be open and transparent.”

At the news conference, Satterlee spoke about his wife Margaret’s family’s first experience as a Bengal, when her mother came to Pocatello in 1948 to attend college. She was only able to attend for one semester as her father passed away. Satterlee said that today, at age 88, she still wishes she could have attended longer.

“She took from her one semester at this university, that she was going to make sure her children went to college. And they did. And they became first-generation college graduates,” he said. “I stand here today humbled that I am going to be working for the university that my mother-in-law spent her whole life wishing she could attend.”

Satterlee said he was going to continue the University’s focus on expanding and growing health care programs, and to help ISU see its great potential. He said he will work to improve student recruitment and retention, and work hand-in-hand with the community. He also said he plans to work with faculty to bring their research and innovations to the forefront.

“When Margaret and I came for our campus visit, we both left with a clear sense of the passion all of you have for this University. I will honor that passion,” he said. “Margaret and I couldn’t be more proud to join the Bengal family.” 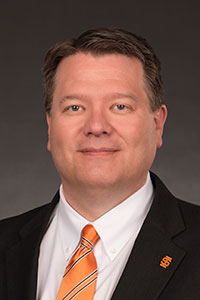 The State Board of Education announces the new President of Idaho State University, Kevin Satterlee.