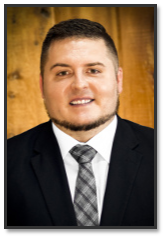 Colby Brower graduated from the University of Washington School of Medicine-Idaho WWAMI Program in May, 2019. He was born and raised in St. Anthony, Idaho on a small family farm and graduated high school from South Fremont High. For his undergraduate studies he attended Brigham Young University-Idaho where he received a BS in biology with an emphasis in neuroscience. He also enjoyed being an adjunct professor there during his transition between undergraduate degree and medical school. He and his family are thrilled to be back in eastern Idaho and to be the first resident of the Rexburg Rural Training Track. He has a passion for full-spectrum family medicine and community wellness. He enjoys horseback riding, team roping, hunting/shooting and spending time with his family.

Dr Marc Steele graduated from Ross University. He is the second Residency Physician to be admitted to the ISU Rural track Residency Program. He is very excited to be a part of this program, and has eagerly awaited this step of his medical training. Marc was born and raised in Las Vegas, NV. He attended Las Vegas High School, and from there, was accepted into Colorado State University. He enjoyed learning, and completed his Freshman year when he decided to serve an LDS mission in Panama. After his mission, he transferred his schooling to Brigham Young University in Provo, Utah, where he received his Bachelor's Degree in Athletic Training. He was able to work in Physical Therapy and Sports Medicine in Greeley, CO for two years after graduation. Marc had always had a passion for helping people, and this desire guided him to prepare for Medical School by getting his Masters in Public Health from Touro University-California with a concentration in Global Health, part of which he was able to study in Cambodia. While in Medical School at Ross University he developed an interest in full-spectrum Family Medicine. He is someone always willing to help, and wants to provide compassionate service to those he sees, especially those who have limited access to healthcare. He is married to his beautiful wife, Melody, and has 3 energetic sons: Kaleb, Kayson, and Kolton. He enjoys playing with his family, sports, taking walks, adventuring outside, quoting movies, and seeing new places.

Dr. Shelby Nordmann graduated from the American University of the Caribbean. She was born and raised in rural Minnesota where she completed her undergraduate education in biology, chemistry, and neuroscience. She spent her summers growing up in Western Montana with family, which is where she fell in love with mountains and the communities in the West. She spent high school and college working as a CNA in long-term care facilities, which solidified her interest in comprehensive family care. Her interests in family medicine are broad and span from the beginning of life to the end, including obstetrics to hospice/palliative care and overall continuity of care with families. She feels especially lucky to get to train in both Pocatello and Rexburg during her residency and is excited to learn as much as she can for her future patients in rural areas. Outside of medicine, she enjoys hiking, camping, horseback riding, volunteering, and doing anything outdoors while spending time with friends and family.