The Idaho Accelerator Center (IAC) is a research facility operated by Idaho State University located in southeast Idaho. It provides opportunities for scientists and engineers from the University, the private sector, and national laboratories to utilize electron accelerators. It serves as a principal investigating conduit for nuclear physics applications research and development in materials science, biology, homeland, and national security. Student's from the Physics department are involved in all aspects of the center, from operating electron accelerators to performing experiments in nuclear physics applications. For more information visit the IAC website. 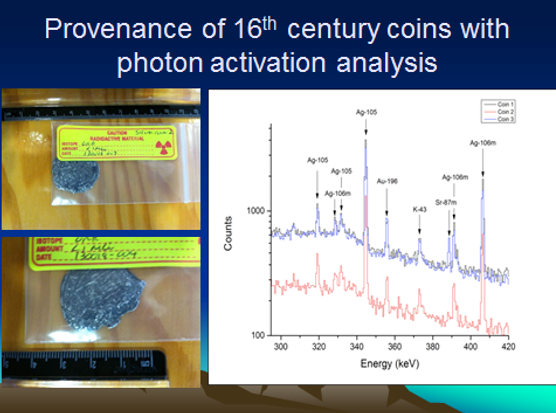 Photon Activation Analysis is a "non-destructive" process of quantifying nuclear isotope concentrations by exciting a tiny fraction of the nuclei in a material of interest using photons in the MeV range.  The photons used to irradiate these materials of interest are produced when electrons, accelerated by the Idaho Accelerator Center's Linacs, are impinged upon a radiator target, typically Tungsten, and undergo a bremsstrahlung interaction.  Stable nuclei can become unstable if a photon "knocks out" either a proton or neutron.  This unstable nucleus can emit radiation in the form of photons as part of its decay process.  A fingerprint unique to the specific nuclear isotope is constructed based on the energy of the observed photon and the half life of the isotope.  An example of how these isotope signatures are used to determine the provenance of Gold coins is shown above. 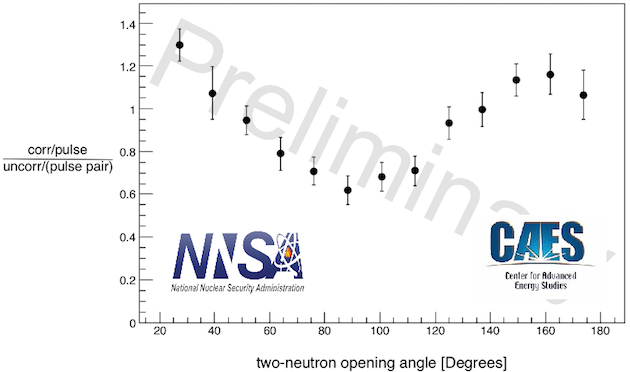 This figure shows the opening angle distribution of two neutrons emitted in the photo-fission of U-238. Bremsstrahlung photons were generated by a 10.5 MeV electron beam which impinged upon a 25 mm aluminum radiator at the Idaho Accelerator Center. Fission neutrons were defined as being in coincidence if they were detected within 150 nanoseconds of each other. This detection rate was normalized using a method that relies on the simultaneous measurement of the uncorrelated neutron emissions. While neutrons are emitted isotopically in the rest frame of the fission fragments, an angular dependence results from the kinematic boost which is caused by the recoiling fission fragments in the lab frame. This work was supported by both the NNSA and the CAES. 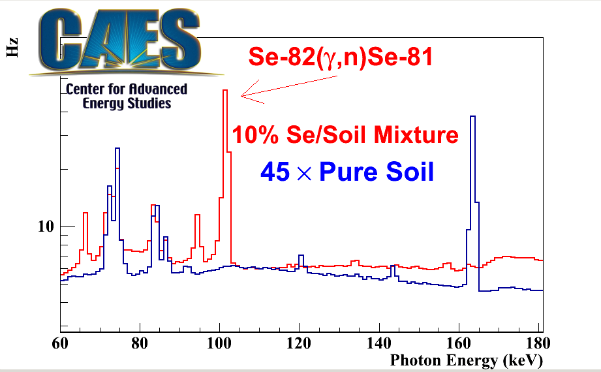 This project illustrates the use of a Nuclear Physics based technique, Photon Activation Analysis, to measure the concentration of nuclear isotopes in a material. Selenium is a naturally occurring element whose isotopic concentrations can vary in both natural and laboratory processes. In particular, the isotopic ratio of Se-82 to Se-76 has been observed to strongly vary in plant material as compared to other materials that would be present in the environment, such as soil. Anaerobic bacteria are believed to be responsible for affecting this ratio when they process selenates and selenites. As part of its mission to educate the next generation of scientists and engineers, the Center for Advanced Energy Studies (CAES) partially supported a student whose research was to determine the minimal detectable limit for observing Selenium. The histogram above represents the energy spectrum of photons emitted from two samples that were irradiated by bremsstrahlung photons having energies up to 36 MeV. A measurement of the Se-82 isotope in soil that has been doped with naturally occurring Selenium is made by observing the characteristic photons emitted by a Se-81 nucleus that results when a neutron is knocked out of a Se-82 nucleus. A measurement of un-doped soil, subjected to the same irradiation conditions, has been overlaid for comparison. The next step of this project would be to study the provenance of Selenium isotopic ratios in plant material. 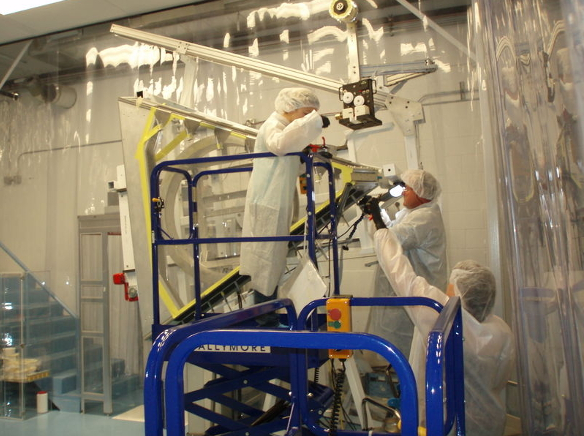 The Idaho Accelerator Center and ISU's Department of Physics constructed detector for the Department of Energy's Jefferson Lab facility in Newport New, Virginia. The detectors are wire chambers containing approximately 5,000, 30 micron diameter wires that are used to form gaseous cells which can detect the passage of ionizing particles. The 2 year long project will construct detectors that are about 6 feet high and will eventually be installed at Jefferson Lab in Newport News, Va. The detectors will be part of a larger detector that will be used by a group of more than 100 physicists to perform fundamental nuclear physics measurements. 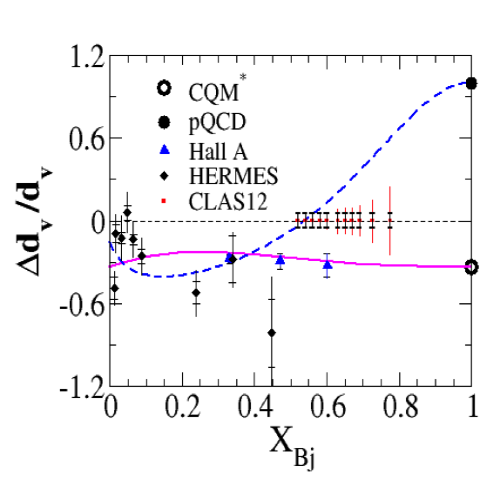 The contributions of a nucleon's constituents, quarks and gluons, to the spin of the nucleon has been a long standing question since the 1980s when it was first observed that quarks contribute less than 40%. The spin physics program at ISU is working to measure the contribution of a nucleon's down quarks to its spin. This is referred to as the down quark fractional polarization. Measurements of this quantity when compared with the standard theoretical description of quark interactions, Quantum Chromodynamics, have yet to indicate a transition from the observed negative values to the predicted positive value of unity. One goal of ISU's spin physics program is to determine the veracity of the theoretical prediction through a series of measurements with the expected precision shown above (CLAS12).