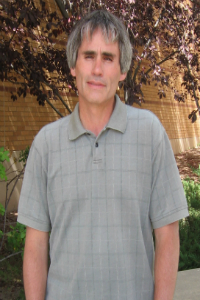 Associate Dean for College of Science and Engineering - Full Professor

We are developing PECVD methodology to deposit amorphous chalcogenide materials, like GexSy, GexSey, as possible phase memory or ion-conductive memory materials. Germanium sulfide is also known to have a large difference in conductivity between it amorphous phase and its crystalline phase. This is essential for phase memory devices. It is also known to have a high ionic conductivity toward Ag and lithium ions. This property is essential for ion conductive or bridge-conductive memory (also known as resistive RAM) and in Li battery applications. GexSey is likely to have higher ion conductivity and we are investigating the ion-conductivity as a function of the relative ratio of the Ge to Se in the PECVD films. We are also doping more metallic elements like Sn into the films and are studying how this affects the conductivity. This work is being performed in conjunction with Prof. Kris Campbell at Boise State University.

It is apparent at this point in time that we have reached a junction in the path we will take to power the world of the future. If we intend to have sufficient non polluting energy for the growing and maturing world it is apparent that solar energy conversion will likely represent a large component of the total energy sources available for humankind. Thin films of germanium and tin sulfides and selenides also have potential application in this area.

Ionic Liquids are ionic compounds that are liquids at room temperature.  Many of these liquids consist of cation with long organic groups and a central positively charged atom, and an anion like dicyanamide or bistriflimide.   We are working with Dr. Donna Baek’s group at the INL performing fundamental studies of several of these liquids, which potentially could be used as electrochemical media for rare-earth metal recovery.  The viscosity and conductivity of these ionic liquids are important factors that must be considered.  We are making conductivity and viscosity measurements on these liquids, at several temperatures, to help gauge strength of the intermolecular interactions present in these liquids.  Additionally, 2d NMR studies we are performing suggest that ordering on a nano-sized scale may exist in these liquids.  We are also using the computational chemistry program Gaussian 16, to perform Density Functional Theory calculations of the interaction energies to correlate with the physical and spectroscopic measurements.  These are being performed via the HPC (High Performance Computing) center at the Idaho National Lab.

We are working on a way to recover defaced serial numbers with a nondestructive method. Currently serial numbers on products like firearms or automobile parts which have been partially or completely filed off are recovered using a wet chemical method. The wet chemical method often recovers the serial numbers piecemeal while etching away the remnant memory of the number that exists in the plastic deformation zone. The plastic deformation zone is an area where the properties of the material have been altered due to the large force needed to imprint the numbers in the material. With the wet chemical method, one may get only one chance at recovering the number, since the remnant of the number is often destroyed as the metal is etched away, and so other non-destructive methods are sought that leave the evidence in a state that is available for further testing or verification at a later time.

We plan to make use of the difference in heat flow in the plastic deformation zone to recover the serial numbers. This will be accomplished through the use of real-time infrared thermography and  image processing techniques. Since this technique does not etch away more of the material, it is nondestructive and leaves the sample available for further testing at a later time.