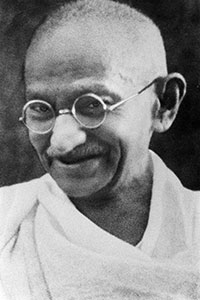 Leader of the Indian independence movement

Gandhi was 24 when he arrived in South Africa in 1893 to work as a legal representative for the Muslim Indian Traders based in the city of Pretoria. He spent 21 years in South Africa, where he developed his political views, ethics and political leadership skills.

Although Gandhi was not the originator of the principle of nonviolence, he was the first to apply it in the political field on a large scale. The concept of nonviolence (ahimsa) and nonresistance has a long history in Indian religious thought. Gandhi explains his philosophy and way of life in his autobiography The Story of My Experiments with Truth. Gandhi realized later that this level of nonviolence required incredible faith and courage, which he believed everyone did not possess. He, therefore, advised that everyone need not keep to nonviolence, especially if it were used as a cover for cowardice, saying, "where there is only a choice between cowardice and violence, I would advise violence."