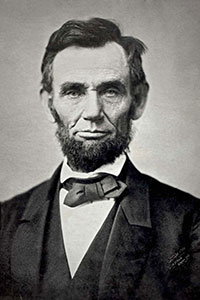 16th President of the United States

Abraham Lincoln was born February 12, 1809, the second child of Thomas and Nancy Hanks Lincoln, in a one-room log cabin on the Sinking Spring Farm in Hardin County, Kentucky (now LaRue County). He was a descendant of Samuel Lincoln, who migrated from Norfolk, England to Hingham, Massachusetts, in 1638. Samuel's grandson and great-grandson began the family's western migration, which passed through New Jersey, Pennsylvania, and Virginia. Lincoln's paternal grandfather and namesake, Captain Abraham Lincoln, moved the family from Virginia to Jefferson County, Kentucky in the 1780s. Captain Lincoln was killed in an Indian raid in 1786. His children, including six-year-old Thomas, the future president's father, witnessed the attack. After his father's murder, Thomas was left to make his own way on the frontier, working at odd jobs in Kentucky and in Tennessee, before settling with members of his family in Hardin County, Kentucky, in the early 1800s.