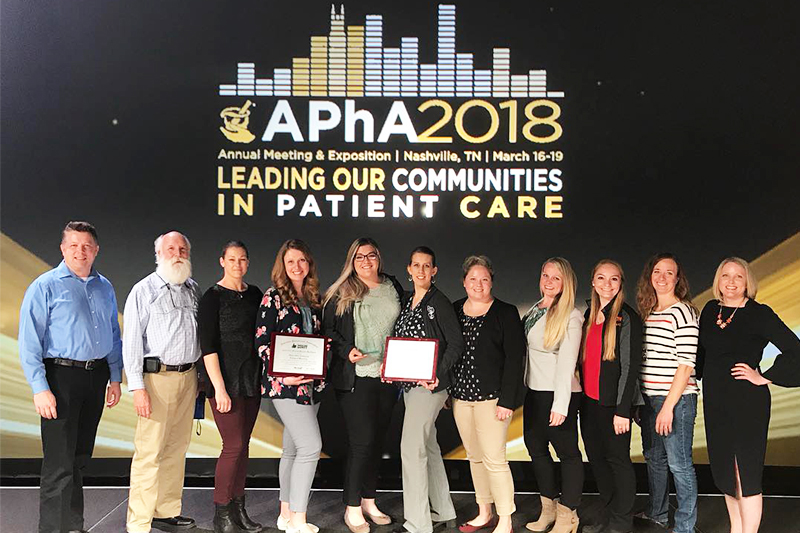 POCATELLO - The Idaho State University College of Pharmacy student organization has received three of the American Pharmacists Association’s (APhA) highest annual awards. The Idaho State University chapter consists of student pharmacists from ISU-Pocatello, ISU-Meridian, and Anchorage, AK and is part of APhA’s Academy of Student Pharmacists (AphA-ASP). Several of the ISU students and their chapter advisors traveled to Nashville, TN in March to participate in the annual APhA-ASP meeting and exposition. There, they were awarded first place nationally for their efforts in the Operation Immunization program, national second runner up for the Over the Counter Medication Safety program, and national third runner up for the Generation Rx program.

These programs are just a few of the community outreach programs conducted by the vast majority of pharmacy schools across the United States. The Operation Diabetes and Operation Heart programs, for example, focus on providing education targeted to people suffering from, or who may be at risk for developing, diabetes and cardiovascular disease.  The programs also aim to better inform citizens, and the students themselves about the role pharmacists play in prevention and managing the effects of these diseases. Between 2016-2017, ISU student pharmacists provided heart disease screening and education to over 1300 people, and provided diabetes screening and education to over 1500 people. Operation Immunization is another outreach program, designed to increase public knowledge of immunizations while providing adult immunizations in an effort to increase the number of adults receiving them.

Nate Reed, a third-year pharmacy student, also called a P3, of Pocatello, and Bekah Dunkley, P3, of Meridian, are the Idaho State Pharmacy Association Representatives for the APhA-ASP. Reed says, “For Operation Immunization, the APhA-ASP takes into account how many immunizations were performed in the community, along with student presentations at high schools and other places in their communities. The APhA-ASP wants to know how many people are affected by the school’s outreach.” With over 3500 immunizations provided to people in the Pocatello/Chubbuck area between 2016 and 2017, the ISU College of Pharmacy student chapter is number one in the nation.  Reed says they are administering mostly flu shots, but they do other types of immunizations as well, and most of the medication costs are sponsored by other pharmacies.

ISU student pharmacists also received the national 2nd runner up award in the 2016-17 Over the Counter Medication Safety program. Their efforts here are also community focused, by providing education and awareness surrounding the dangers of over the counter medication misuse.

A similar program, Generation Rx, is two-fold. This program focuses partly on elderly prescription takers and keeping them safe. The second piece is working to help keep children from accidentally ingesting medication they may find in their home or someone else’s home. Here, the students received the national 3rd runner up award for their efforts in talking to children and playing games with them in elementary schools, along with visiting high schools and colleges to educate people of all ages that medications are important to take appropriately. Another message the students work hard to pass along to everyone they visit is the key role a pharmacist plays in medication safety.

Anyone who has ever picked up a prescription from a pharmacy has probably had the opportunity to speak to the pharmacist about how to take the medication, its side effects, and ask any questions they may have about the drug. This patient counseling is something that pharmacists, and ISU’s College of Pharmacy students, take very seriously.  Another program that most pharmacy schools participate in is a competition to help train students to be successful in providing this patient counseling. As one of the Idaho representatives for the APhA-ASP, Reed says, “Our main job is to put together the Patient Counseling Competition. We had 11 competitors, and three judges, two faculty and one non-faculty. We came up with six different scenarios for the students to counsel the mock-patients, each one had a different disease. They came into the pharmacy and were handed an antibiotic or an inhaler and the students played the role of a pharmacist.” Reed says that in order to be successful, the competitors must go over the side effects of the drug, how to take it, what to do if the patient missed a dose, and complications to watch for. The rules of the competition say that the patient counseling can last as long as five minutes, but most students were finished in about two to three minutes. Reed says some of the students did very well, and some struggled, and it was just a little bit awkward for others. When the day was done, the winner of the competition was officially qualified to go to the national competition, held at the same APhA meeting in Nashville.

One student, Chelsea Bagby, P2, made the trip and competed in another patient counseling competition on the national level. Bagby did very well and made it into the final round, with only nine other student pharmacists from across the US. Reed says, “We’ve been doing the patient counseling competition for a long time. Here at ISU we try to stay as involved as we can with APhA-ASP and with other APhA-ASP chapters. It’s prepared our students to become more rounded pharmacists when they get out into practice. They’ve had that experience in the community, getting the most experience that they can so when they step into that pharmacist role, they are more prepared. We like to take advantage of those opportunities whenever we can, as it also gives them confidence as well.”