Note: Kingston Trio tickets not included in season packages.  Will be sold as individual tickets only. 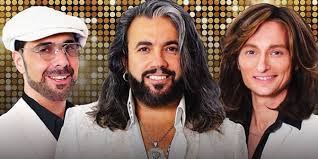 John Acosta as Barry Gibb has performed in Bee Gees Tributes all over the world. His portrayal of lead singer Barry Gibb is with a zest for detail, like no other. From the look to the falsetto you will close your eyes and say its Barry! John Acosta's Bee Gees Gold tribute Is the ultimate salute, and experience of seeing the Bee Gees in their prime, LIVE ONCE AGAIN! With the detailed vocal stylings of John Acosta (Barry), Daryll Borges (Robin), Jeff Celentano (Maurice) as the brothers Gibb, there is a sensation that will make you blurt out , Wow.. I just seen and heard the Bee Gees! Backed by a live band, the Vegas Bee Gees tribute recreates the look and sound of the Bee Gees from the 60's to the late 70's, with their unique falsettos that made them legends. Performing such early hits as Massachusetts, I started a Joke, to the later Disco classics, Stayin' Alive, and You should be dancing! 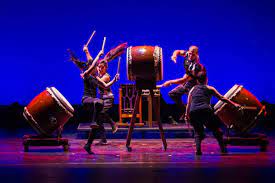 About the only American taiko group to ever win the prestigious Tokyo
International Taiko Contest, LA Weekly says, “This ain’t your mama’s taiko,
but it may be your hip, younger cousin’s”.  Founded in 2000 by a group of
young, emerging taiko drummers led by Bryan Yamami and Masato Baba, their
music is rooted in the rich traditions of Japanese taiko, but expressed through the
lens of their American upbringing and experiences.
Their new full-length concert program “BENZAITEN” is inspired by the Japanese
goddess of wisdom, beauty, and dance.  TAIKOPROJECT has always sought to
break the boundaries of traditional taiko and create new music and choreography
based in the art form, but expanding past its original expressions.  In this latest
work, they are challenging gender roles in taiko music and emphasizing the
equity present in their ensemble that has not been present in the genre in the
past.  But not only will they be showcasing their female members in powerful,
strenuous roles, but also delving into their male members’ delicacy and grace in
a multi-layered exploration of taiko and gender.
Having performed and recorded with Stevie Wonder, Usher, Alicia Keys, John
Legend, Kanye West and with appearances on the Academy Awards, the
Grammy Awards, NBC’s “The Voice,” Syfy’s Face/Off, The X-Factor, Conan and
Jimmy Kimmel Live, TAIKOPROJECT is THE taiko show for your discerning
audience. 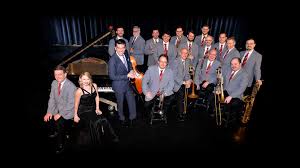 The world-famous Glenn Miller Orchestra brings timeless classics like In the
Mood, Moonlight Serenade, Chattanooga Choo Choo, Pennsylvania 6-5000,
String of Pearls and Tuxedo Junction back to the stage. Even 80 years after
founding his famous orchestra Glenn Miller’s music is alive and well.

Over 18 musicians and singers bring the unforgettable Glenn Miller sound and
perform those songs that everyone remembers... This is a show not to miss for
jazz and swing fans alike or the incurable romantics who want to step back in
time. The legendary Glenn Miller was the most successful of all the dance
bandleaders back in the Swing era of the 1930s and 1940s. 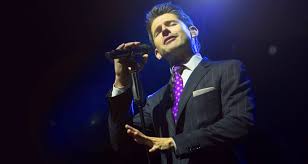 Sinatra. All that cool, classy style and energy from the Rat Pack shows of
yesterday are right here, right now. Take a journey with Award Winning, Multi
Platinum selling crooner Matt Dusk as he whisks you away to Las Vegas in 1966
where he pays homage to his hero Frank Sinatra.
With new arrangements by Grammy Award winning arrangers Pat Williams and
Sammy Nestico, Dusk transports you back in time to one of music’s most elegant
era’s. A time when Come Fly With Me, I’ve Got You Under My Skin, Fly Me To
The Moon and One For My Baby dominated the charts.
Multi-award-winning, Platinum-selling artist Matt Dusk has been enthralling
audiences around the world for years, leaving in his wake a series of radio hits,

acclaimed albums, and a loyal fan base that continues to grow with every
passing year.

He has had three number one radio hits: All About Me, Back in Town and Good
News, is an alumnus of the St. Michael’s Choir School and studied under jazz
piano legend Oscar Peterson at York University.
Dusk has been awarded three GOLD albums: Two Shots, Good News and
JetSetJazz and three PLATINUM albums: My Funny Valentine, Just The Two of
Us and Old School Yule!
Notable award nominations include, five JUNO awards, one ADISQ, one Róże
Gali: Muzyka and a Dimond from Trójka PR3 in Poland.