The journey to commencement looks a little bit different for each student at Idaho State University. While many students worry about cramming for their final exams or finding the right job after college, one recent graduate faced a unique set of challenges that gave him every reason to quit, including mental health instability and the loss of his best friend, his wife Melanie. 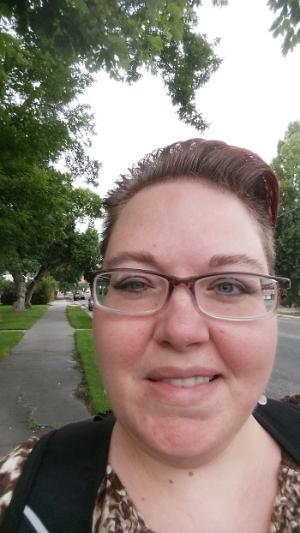 Enduring a mental health crisis in 2015, Bryan Anderson found himself looking for a way to cope with post-traumatic stress disorder (PTSD) following his time serving in the United States Air Force. He decided to enroll at ISU and on a whim, he decided to join his wife Melanie, who was just beginning her art degree at ISU. At the time, he didn’t know that would be the best decision he ever made.

Through the process of creating art, particularly painting, Anderson was able to work through much of the PTSD he was suffering from, finding ways to express himself through a number of creative mediums. He and Melanie also became closer, and Bryan attributes the classes they took together and the experiences they shared as a major factor in saving their marriage.

“That was a really special experience. Things were pretty rocky when we started and then between my mental health stabilizing and having this time together, spending that much time together, we were able to, through the art, deal with some really important life issues, meaning making, processing past events, things like that that art will pull you into,” Anderson explains. “It really put us into a position to be really focused and intentional about our relationship and we went from seriously considering divorce, to the last three years which have probably been the best of our marriage.”

Anderson graduated from ISU in 2019 with a Bachelor’s of Fine Arts degree and based on his experience with the creation of art and its cathartic nature, found a calling in helping others process their emotions through creative works and counseling. He was accepted into the Master’s of Counseling Program, Clinical Mental Health Track and began in the fall of 2019.

While Bryan’s transformation took place, the health of his wife Melanie was transforming as well. After suffering for years with a number of health problems and multiple surgeries, Melanie was diagnosed with metastatic melanoma during Bryan’s final semester in the spring of 2021. She was admitted to Huntsman Cancer Center in April, at which point the counseling program allowed him to put his education on hold and focus on her care. In May she returned home for terminal hospice care and passed away June 6, 2021.

Even as a mental health professional, the grieving process was a dark time for Bryan. Working to sort through Melanie’s belongings, such as fabrics they had purchased together, or some of her drawings that he had never seen before proved to be very difficult. He was able to find solace in making the decision to finish a fiber arts piece that was left unfinished on a loom in their living room.

After taking several months off he was able to resume his counseling internship in September. He has completed his remaining incomplete courses and will officially graduate this month, though he was invited to cross the commencement stage with his cohort of students in May 2021.

Due to the closeness of students in his cohort, Bryan credits the friends he made, both students and faculty in both his undergraduate experience and in the counseling program, as critical components of his success.

“The faculty and students in both the art department and counseling program have been extraordinarily supportive at academic, personal, and professional levels, and I am grateful for the guidance and encouragement they have offered throughout this journey,” he says, naming at least 12 individuals by name. “They, along with ISU’s Disability Services and Veterans Service Center, have been an amazing help in my journey.”

Bryan and Melanie would have celebrated their 21st anniversary in August 2021. To honor her life, Bryan, in collaboration with the ISU art gallery director, has arranged a retrospective art show to be held beginning January 10, 2022 displaying much of Melanie’s work.