As part of the annual graduation and end-of-year festivities at Idaho State University, the Kasiska Division of Health Sciences (KDHS) celebrates the accomplishments of each school year at an annual reception.

The KDHS awards three Professional Achievement Awards each year to alumni of programs within the division who have made a distinct impact in their industry. These individuals are honored for their contributions to the mission and vision of the KDHS, along with the exceptional levels of excellence they practice in their daily work in the health professions.

At a reception in the Stevens Performing Arts Center Rotunda May 4, the College of Pharmacy honored Ed Snell, RPh, owner of Ed Snell’s Pharmacy Shop in Pocatello as their Professional Achievement Award recipient. Snell graduated from the College of Pharmacy at Idaho State University in 1976. After a brief stint working in a chain pharmacy and a short foray into real estate, he opened his first store in March of 1988 in Pocatello. When the store outgrew that location in 1999, Ed purchased another building across the street to have more room to care for his patients, and is still taking care of them in that location today. He also purchased pharmacies in Blackfoot, Jerome, and Hailey, Idaho that are now run by pharmacists Snell helped train throughout his career, one of whom is his son Luke. 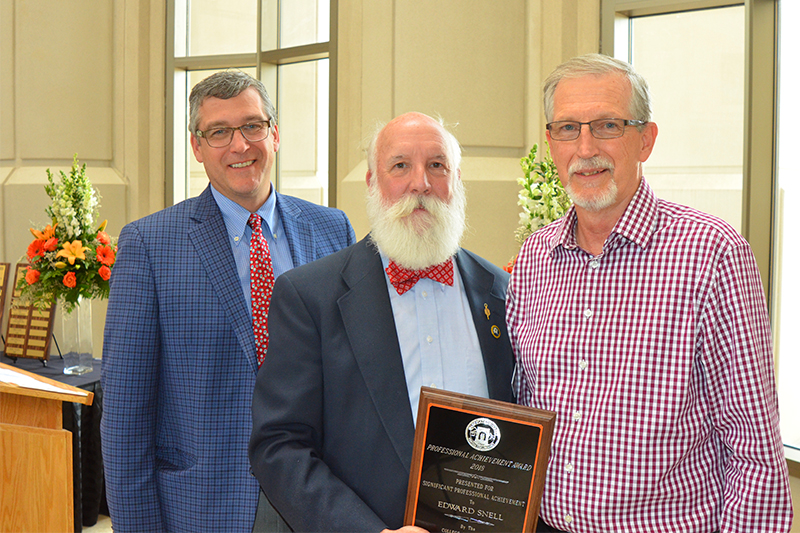 The School of Nursing selected Michael McGrane as their Professional Achievement Award recipient. McGrane graduated from ISU School of Nursing in 1982 with a Bachelor’s in Nursing degree and a Master’s in Nursing in 1985. He started working on the pediatric unit at Bannock Regional Medical Center and then went on to work as a life flight nurse. From there he advanced and was the Coordinator of Life Flight services at St. Alphonsus Regional Medical Center in Boise Idaho and later became the Director of Trauma and Life Flight there.

McGrane moved to St. Luke’s Regional Medical Center and Health System in Boise to become the Senior Director of Air St. Luke’s in 2001 and retired in 2015. Currently, he serves as a lobbyist at the Idaho legislature where he represents nursing interests for the Nurse Leaders of Idaho and American Nurses Association Idaho.

McGrane has provided active leadership and participation in over 31 council, committees, commissions, task force initiatives, coalitions, boards, societies, and associations during his career. He was instrumental in the implementation of the Idaho Trauma Registry and developed the only maternal child transport service in the state of Idaho.

Karen Neill, PhD, associate dean for student affairs and associate director for graduate studies at ISU’s School of Nursing, introduced McGrane during the reception, saying, “Mike has been a mentor and preceptor for the School of Nursing and an excellent role model in clinical practice. Mike’s dedication to ISU, the community and nursing profession is honorable – Mike represents the spirit of nursing in giving and caring for those in need, and providing quality care and nursing expertise in situations where expertise and commitment truly make a difference.” 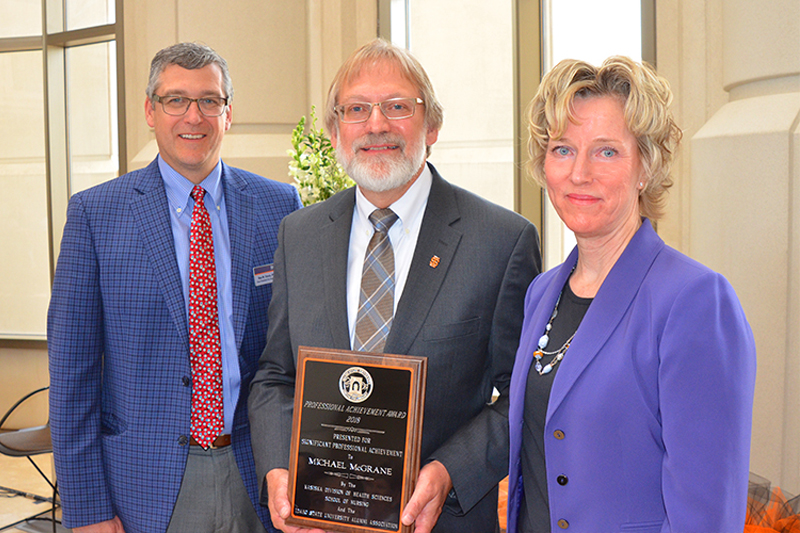 The Kasiska Division of Health Sciences selected Casey Dye as their 2018 Professional Achievement Award recipient. Dye earned his Bachelor of Science degree from ISU in Radiographic Science in 2004 and a Master of Health Administration degree from Weber State University in 2016.

Dye is now the director of Diagnostic Services (Imaging and Laboratory) at Madison Memorial Hospital in Rexburg.  Prior to this he worked as a radiologic technologist at Primary Children’s Medical Center in Salt Lake City and at Madison Memorial Hospital. He has been a lead radiologic technologist, clinical instructor, quality assurance lead, diagnostic imaging coordinator and interim radiology director at Primary Children’s Hospital.

Dye has been an advocate and leader in the field for reducing pediatric radiation doses during imaging examinations, he serves on many committees and is involved in numerous charity fundraising events, according to his nominators for this award. He transitioned both Primary Children's Medical Center and Madison Memorial Hospital from computed radiography technology to direct digital radiography.

Speaking of Dye’s accomplishments as she introduced Dye during the reception, Wendy Mickelsen, MHE, said, “He is a member of the planning committee for the 40 year reunion this fall of the first radiographic science class graduating from ISU in 1978. He was instrumental in securing a donation from Madison Memorial Hospital of a hospital bed, a crash cart, incubator, portable x-ray unit, pediatric mannequin, and other items for our new patient care simulation room, radiographic science classroom. He is also involved in raising money, as an ISU alumni, for the Radiographic Science Endowment Fund, and assists with scholarships for future students. Through all his academic, clinical and management success, Casey exemplifies excellence. His example is a model for all of us to follow.” 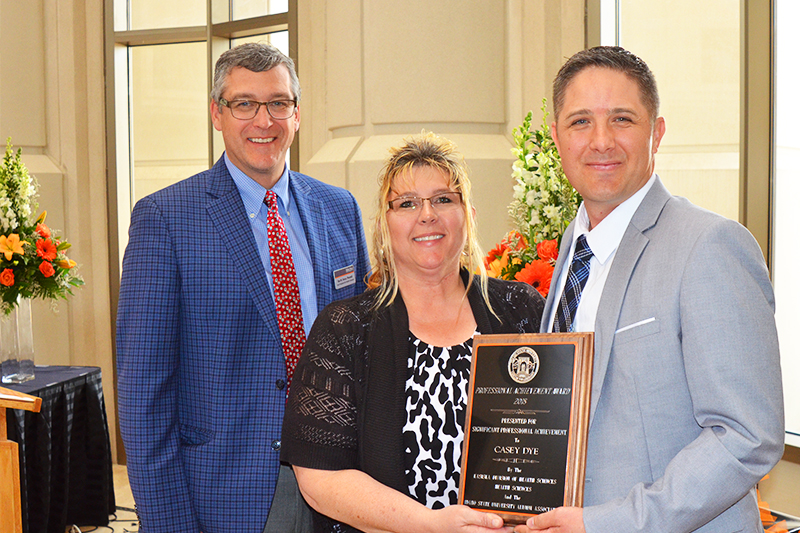 Wade Tolman and his wife, Karen, are both ISU alumni. Tolman earned a degree in economics and immediately started a career in banking. After a 30-year career, he retired from KeyCorp as Executive Vice President and Manager of Enterprise Technology. His career took him to Boise, Portland, New York, and Cleveland. Following retirement, the Tolmans moved back to Pocatello and are active in the local community.

Dirk Driscoll is currently a Director on the ISU Foundation Board of Directors, and serves as the President of the Bengal Pharmacy Board of Managers. He is also well-known and respected within the agribusiness community, is a managing partner of Driscoll Brothers Partnership.  The brothers oversee the farming of more than 20,000 acres of potatoes, wheat, sugar beets and corn. They own and operate Driscoll Potatoes, Inc., a fresh potato packaging facility in American Falls that packs and ships potatoes throughout the United States. In addition, the family owns and operates a trucking company, a truck repair and service center, a wholesale and retail oil and fuel company, and a grain elevator.  More recently they added Harpers Homemade Baking Company and TopHay, which exports hay to China, to their portfolio.

Driscoll served on the Bingham County Planning and Zoning Commission, the executive board of the Grand Teton Council of the Boy Scouts of America, as president of the Aberdeen Chamber of Commerce, and in a leadership role for the LDS Church. Both he and his company have been long-time generous supports of scholarship programs and Bengal Athletics. 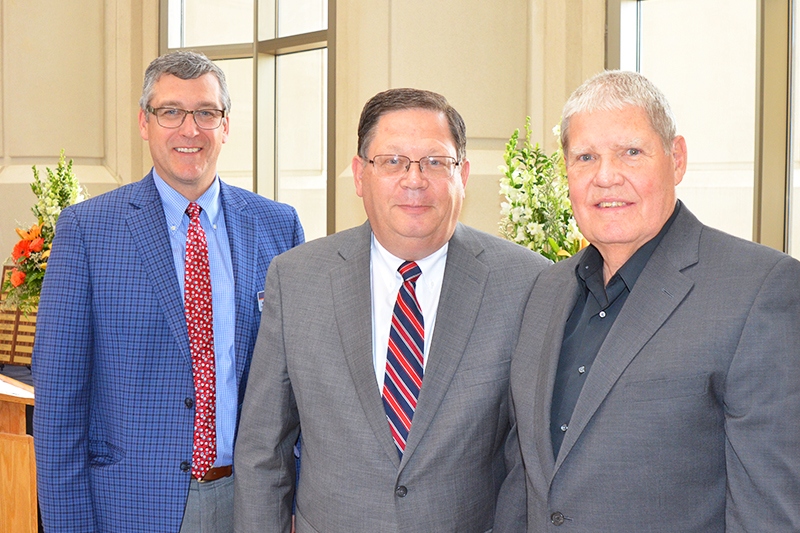