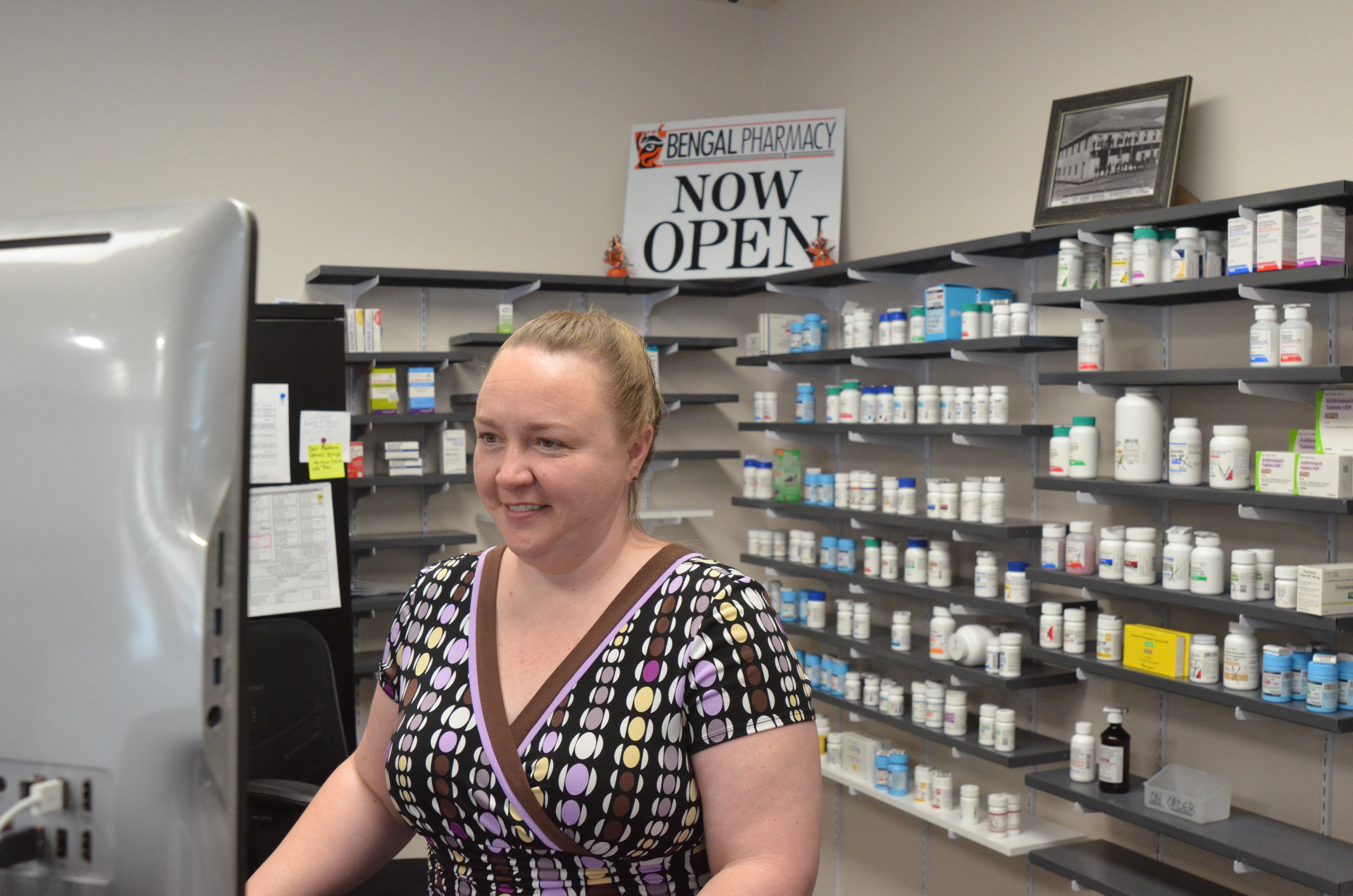 KENDRICK - After living without pharmacy services for three years, residents in the rural towns of Kendrick and Juliaetta, Idaho now have reason to celebrate. A local pharmacy has now returned to the area, through a partnership with Idaho State University’s Bengal Pharmacy, College of Pharmacy, and Gritman Medical Center in Moscow, ID.

After ISU representatives worked for several years to change the Pharmacy Practice Act in Idaho, allowing a pharmacist to dispense medications remotely via video conferencing and telecommunications, a fourth telepharmacy location operated by Bengal Pharmacy staff opened in Kendrick in January. Representatives from each partner group, along with city officials and residents of the Kendrick/Juliaetta area, came to cut the official ribbon during the grand opening April 5. Several dozen people were in attendance to participate in the opening, and citizens will no longer have to make the 30 some mile drive to Lewiston or Moscow to pick up their prescription medication. The rural Idaho towns of Challis, Council and Arco celebrated similar openings of Bengal Telepharmacy locations in the last five years.

This new pharmacy in Kendrick operates on a slightly different model than the Red Cross Pharmacy, housed in the same building for approximately 50 years prior. Telepharmacy is the delivery of pharmaceutical care using telecommunications and other information technologies to patients in locations who do not have direct contact with a pharmacist. Misty Lynam, a pharmacy technician there, works in conjunction with a pharmacist or student pharmacy intern at Bengal Pharmacy in Pocatello, using still and video cameras, telephone, and email to verify a patient’s medication. The scripts, pill bottles, medication labels, and even the tablets themselves, are placed below a camera by Lynam, and viewed by pharmacists in Pocatello for accuracy before being dispensed to the patient. Each time a new patient, or an existing patient taking a new medication, fills a prescription there, they are offered a consultation with that pharmacist. The consultation takes place in a private room, via video conferencing.  Both Shanna O’Connor, director of clinical services and Brett Jacobson, pharmacist in charge at Bengal Pharmacy in Pocatello say patient counseling is not only a requirement under state law, but it’s something they love to do. O’Connor offers prescription counseling to nearly every patient she sees, just to ensure there aren’t going to be any unwanted side effects or complications. O’Connor said she enjoys providing the counseling because it helps make sure her patients are getting the best regimen of medications for them. “Some of my highly complex patients who are dealing with chronic conditions such as heart disease are taking anywhere between seven and thirty medications at a time. Many people think pharmacists are trying to push drugs to their patients, but that isn’t the case. I’m an advocate for controlling chronic disease with as few medications as possible, even zero if possible. Drugs are the answer for some things, but not everything,” she explained.

When the previous pharmacy in Kendrick closed, Gritman Medical Center purchased the building and called Idaho State University right away. Rex Force, vice president for health sciences at ISU, said “They had heard about our telepharmacy operations in the other rural towns, and asked if we would be willing to help in Kendrick also.” During the grand opening ceremony, both Force and Kara Besst, CEO at Gritman Medical Center, offered their appreciation for the other group’s participation and collaboration in getting the pharmacy open. Force says, “I appreciate the partnership of all the entities involved. This project would simply not have worked without these partnerships. The ISU Foundation has also been there beside us, supporting our students and our mission.”

Dirk Driscoll, a member of the ISU Foundation Board of Directors, made the trek to Kendrick to witness the grand opening first hand and said, “I have been working for several years on the foundation board to see this project to completion. I am honored to a part of what’s happening today in Kendrick. This is about people and you can feel that in the group of people involved.”

Telling a story about one of his many visits to Kendrick from Pocatello, Dean for ISU’s College of Pharmacy, Paul Cady spoke about a woman at a gas station who thanked him for “saving our community.” Cady said, “Nobody wants to purchase healthcare. Nobody wants to get examined by a physician or have a tooth pulled, they just want improved quality of life, and that is why we are here.”