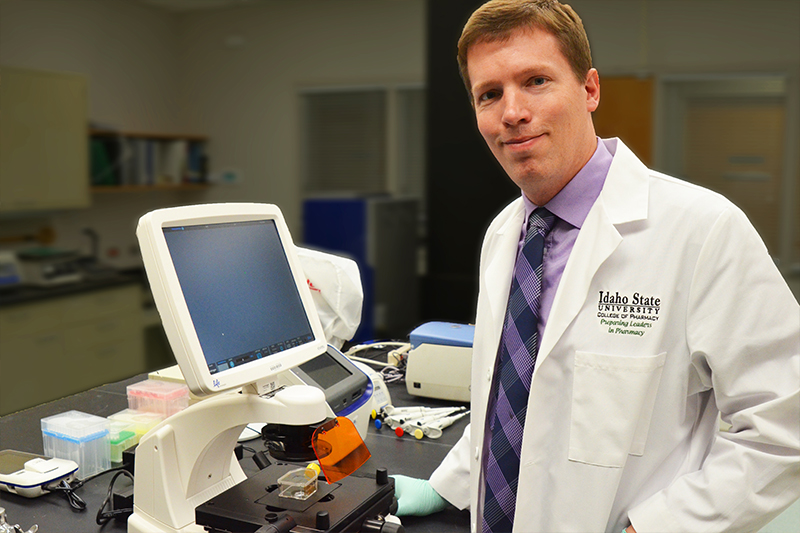 Dr. Jared Barrott in the lab where he is researching cancer drugs to treat rare tumors in children and teenagers

After more than eight years of research training and education, a scientist at Idaho State University’s College of Pharmacy is ready to begin work studying an anti-cancer drug in a new setting, in the hopes that it will help treat children with advanced bone and muscle cancers.

Jared Barrott is an assistant professor in the Department of Biomedical and Pharmaceutical Sciences at ISU. In addition to teaching in both the graduate school and College of Pharmacy, he conducts research in cancer pharmacology, using genetically engineered mice to form rare soft-tissue sarcomas that are then treated with anti-cancer drugs to test for safety and efficacy.

Barrott's goal is to test the drugs in animals before they are given to people to make sure they are both safe and effective. The cancers that he is most interested in are rare tumors that happen in the muscles and bones of children and teenagers. These tumors can be deadly if doctors do not remove them before they spread to other parts of the body, specifically the lungs and brain. “If the cancer spreads to other organs, almost 90% of the kids will die because we do not have very effective drugs to treat it,” Barrott says.

His research is testing drugs in genetically engineered mice with the same kind of muscle and bone cancer that will treat the cancer once it has spread. Barrott says, “These drugs have advantages because they recognize unique properties of the cancer that do not usually exist in the normal cells of our body. It is predicted they will be less harmful to the patient than other cancer drugs, but still eliminate the cancer cells. Some of these drugs have already shown some effectiveness in treating patients with advanced breast cancer and we think it will do the same for these children with advanced muscle and bone cancers.”

One of the anti-cancer drugs is called HS-131, which targets a very unique profile in cancer. Barrott says, “This drug addresses a protein expressed inside the cell and then starts being expressed on the outside of the cell. The more aggressive the cancer is, the more this protein is shuttled to the cell’s membrane. While this has been convincingly demonstrated in advanced breast cancer, we think it has a similar molecular profile in synovial sarcoma. We feel like we can have a unique strategy by targeting with this new drug that exclusively matches with that protein expression.”

Barrott and a team of other scientists began studying HS-131 at Duke University, and it has gone through testing, been awarded a patent, and gone through investigational new drug applications with the FDA. HS-131 also received a Transformative Vision Award from the United States Department of Defense. “It was really exciting to see a project transition from something that we thought had effects in treating viruses to see it go into something completely different in treating cancer and see it go all the way into clinical observation. I use that experience to study drugs in my own research and see how drugs can be applied with clinical success,” Barrott says.

According to Barrott, the field of breast cancer research is “a little crowded,” given the number of people studying it and their resources. His goal is to make similar advancements and discoveries in lesser known cancers, such as the sarcomas, that deserve that same attention. He is now taking that training and research from Duke University and applying it in this new cancer setting. “All we have right now to treat the kids with these sarcomas is surgery, radiation and toxic chemotherapy.  There are discoveries to be made both in the biology and genetics that drive the cancer, we’re going to understand how better to tailor a drug that will target that specific vulnerability in the cancer, with a goal to replace chemotherapy,” Barrott says.

Personalized medicine is the direction that cancer therapy is moving towards, according to Barrott. He says understanding the genetics of the patient and the genetics of the cancer allows scientists to tailor a therapy that matches that genetic profile. That is what he is trying to achieve in his genetic animal models, but there are some challenges. “Working with mice is a slow and arduous process. A lot of people don’t appreciate the time that it takes to build these models, but it is the closest thing we can get to human disease. We are starting to understand the cancer cells in their native environment, and if we don’t study the cancer in that native environment then we are missing the target in determining the effectiveness of the drugs. We are at a point where we have lots of drugs now available to us and we just need to take time to do the research,” Barrott says, adding, “What keeps me going is having those small breakthroughs. In science you take every victory you come across and keep going with it, even though there are many challenges.”

Barrott says he plans to administer the first dose of HS-131 in the mouse models within the next few weeks. Over the course of the last ten months, the mice were bred at the University of Utah, and it then takes four months to generate the tumors. He says it will be a smooth process once he starts, with results expected in about four or five months.  Barrott says, “While this is a project that is unique to myself, I enjoy the collaborative process. There are many great individuals here at Idaho State University and other research institutions that are needed to have successful implementation of anti-cancer therapies in patients with these rare sarcomas.”

Barrott is originally from Chattanooga, TN., and traveled west for his undergraduate education at Brigham Young University-Idaho. After meeting and marrying his wife, the family traveled east for schooling at Duke University to obtain his PhD in Pharmacology and Cancer Biology. He then completed a postdoctoral fellowship at the Huntsman Cancer Institute in Salt Lake City in July of 2017 and started working in the department of Biomedical and Pharmaceutical Sciences as a tenure-track assistant professor in August 2017.

Marvin Schulte, chair for Biomedical and Pharmaceutical Sciences at ISU, says, “Jared is an example of the new outstanding faculty our department is recruiting.  Cutting edge research like he is pursuing is exactly what ISU needs to succeed in this highly competitive funding environment.”

One of the things Barrott says he appreciates here at Idaho State University is being able to reach out and be more of a teacher and trainer of the next generation of scientists, including outreach programs to high school students in the hopes of getting them engaged in laboratory science in college. He says he didn’t have that exposure to laboratory science as a high school student, or even as a college student. It wasn’t until graduate school that he was able to see the career opportunities in the field of medical laboratory science. He says, “Had I been given that exposure, I could have made some life and career decisions that would have catapulted me further into the science career. I want to take that experience and help provide that exposure at an earlier age, to encourage students here in Eastern Idaho to get involved, and help prepare them for different aspects of their career in the future. It’s not only a unique situation that we can have here but it’s also a need that we have here in Idaho. We are lagging nationally as far as educational quality, and there is a lag in having good paying jobs when they graduate. Things like this that they can have on their resume help to put them ahead of where they normally would be,” Barrott explains. He is also hoping to recruit and train students to help with his research as well.

Barrott says there are several reasons why he enjoys his job. “One is the independence that I have to do cutting-edge research for a population of patients that normally do not receive a lot of attention,” said Dr. Barrott. “To think that what I do on a research bench might translate into better health outcomes for patients, specifically in pediatric oncology is very gratifying. The other aspect of my job that I am enjoying is the connection with students through my teaching. I love to see concepts of genetics solidify for students who are trying to understand the implications of certain genetic mutations and their potential for therapeutic intervention.”