Dr. Jeff Meldrum holds a doctorate in anatomical sciences with an emphasis in physical anthropology from the State University of New York at Stony Brook (1989). He is currently a Full Professor of Anatomy & Anthropology in the Department of Biological Sciences. He has been at ISU for 27 years. His formal study of primate locomotion began with the terrestrial adaptations of African primates, and has since taken him from the skeletal cabinets of far-flung museums, to the remote badlands of Colombia and Argentina in search of fossil New World primates. He has published extensively on the evolutionary history of the South American primates and has described several new extinct species. His attention returned to the emergence of modern human bipedalism, including the analysis of fossil hominin footprints. His co-edited volume, From Biped to Strider: the Emergence of Modern Human Walking, Running, and Resource Transport, redirects attention from the origins of simply walking on two legs, to the pattern of emergence of the innovations specifically unique to modern human gait.

His interests in the footprints attributed to an unrecognized North American “relict hominoid,” commonly known as sasquatch, came into focus when he literally crossed paths with an enigmatic trackway of 15-inch footprints in southeastern Washington. He has erected the ichnotaxon naming and diagnosing the footprints attributed to sasquatch as Anthropoidipes ameriborealis MELDRUM 2007. He has conducted collaborative laboratory research and fieldwork throughout North America and Asia, and has spoken about his findings in numerous interviews, television appearances, public and professional presentations and publications. His book Sasquatch: Legend Meets Science bears the endorsement of Dr. Jane Goodall, who said “Dr. Meldrum’s book…brings a much needed level of scientific analysis to the sasquatch – or Bigfoot – debate.” His Sasquatch Field Guide is a helpful how-to, for differentiating and documenting evidence by the citizen scientist. 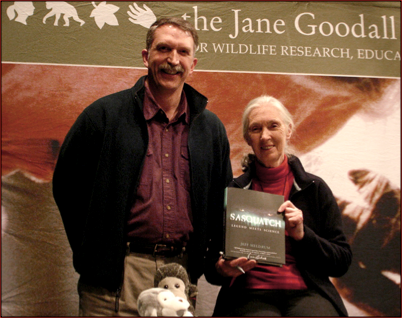