SEATTLE – Students from different backgrounds in the United States enter college with equal interest in STEM fields — science, technology, engineering and mathematics. But that equal interest does not result in equal outcomes. Six years after starting an undergraduate STEM degree, roughly twice as many white students finished it compared to African American students.

A new study by researchers at the University of Washington shows that teaching techniques in undergraduate STEM courses can significantly narrow gaps in course performance between students who are overrepresented and underrepresented in STEM. 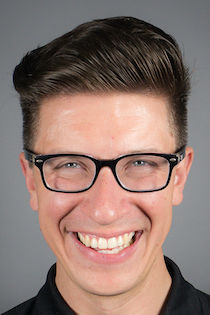 Idaho State University’s Brandon Peecook, a new assistant professor of biological sciences and assistant curator of vertebrate paleontology at the Idaho Museum of Natural History, is one of 30 co-authors on the paper. He participated in the study as a UW doctoral student.

“I was part of a research team conducting a meta-analysis on the disproportionate benefits of active learning – as opposed to lecturing –  techniques in the classroom to student populations underrepresented in STEM fields,” Peecook said. “We found significant results for grade improvement and retention in the discipline for key student groups. We're expecting this data to help drive large movements in pedagogy across the country.”

In a paper published the week of March 9 in the Proceedings of the National Academy of Sciences, the team reports that switching from passive techniques, such as traditional lectures, to inquiry-based “active learning” methods has a disproportionate benefit for underrepresented students, a term that encompasses low-income students and Latinx, African American, Native American, and Native Hawaiian and Pacific Islander students.

The researchers used a meta-analysis approach, which combined student-level data from dozens of individual studies, to investigate how student performance changed when instructors incorporated more active learning methods into undergraduate STEM courses. They found that the achievement gap between overrepresented and underrepresented students narrowed on exam scores by 33% and course passing rates by 45%. For “high-intensity” active learning courses, in which students spent at least two-thirds of total class time engaged in active learning, the gap for exam scores shrank by 42% and 76%, respectively, for passing rates.

“Our study shows that broad implementation of active learning in undergraduate STEM courses can have a dramatic effect on reducing achievement gaps, resulting in more positive outcomes for students who are underrepresented in STEM fields,” said lead and co-corresponding author Elli Theobald, a research associate and instructor in the UW Department of Biology.

Research has shown that the achievement gaps in college STEM degree programs occur in part because students from underrepresented backgrounds tend to score lower on exams and have lower passing rates in entry-level undergraduate STEM courses. As a result, more underrepresented students switch majors or drop out of college. Six years after starting a STEM degree, 43% of white students and 52% of Asian American students have finished it. But completion rates drop to between 20 and 30% for Latinx, African American and Native American students, according to the National Academy of Sciences. Disparities in earning STEM degrees also exist between students from high- and low-income backgrounds, said Theobald.

College STEM courses are largely taught using traditional, passive methods like lectures. In contrast, active learning techniques, which include a variety of discussion-based and problem-solving teaching methods, have not been widely adopted.

“You can sum up the difference between passive and active teaching methods in three simple words: ‘Ask, don’t tell,’” said co-corresponding author Scott Freeman, principal lecturer in the UW Department of Biology. “The goal of active learning is to engage students and get them to use their higher-order cognitive skills — instead of simply memorizing definitions.”

In a 2014 paper, a UW team led by Freeman used a more classical meta-analysis approach to show that active learning methods boost average student performance. For this new study, they used a different meta-analysis approach that tracks individual participants and breaks down the impact of active learning between overrepresented and underrepresented students. The researchers had to sort through more than 1,800 published and unpublished studies before finding the few dozen that both compared active and passive techniques and also had data on student demographics, according to Freeman. The student exam score data they used came from 15 studies — representing more than 9,000 students — while the data on passing rates came from 26 studies of more than 44,000 students.

On average, the team saw that active learning methods narrowed the achievement gaps significantly in both exam scores and passing rates between overrepresented and underrepresented student groups.

Future research is needed to understand why active learning disproportionately benefits students from underrepresented backgrounds. These learning techniques could create a more welcoming and inclusive environment, which may be especially important for students who often feel as if they don’t belong in STEM, or “feel excluded,” said Theobald. Active learning may also help students comprehend material better by taking them through complex concepts step by step, with regular check-in moments. This targeted, intensive practice may disproportionally help students from educationally disadvantaged backgrounds, by ensuring they understand the material and don’t fall behind.

“These are loud, active rooms, with lots of dynamic interactions and opportunities to discuss and learn at a level you simply don’t get using a traditional lecture,” said Freeman.

Though they saw the greatest gap-narrowing effects in courses that devoted more than two-thirds of class time to active learning, both Freeman and Theobald caution instructors to take it slow in incorporating the approach.

“If you have a lecture-based course that you’ve already taught even just a few times, changing it can take a lot of work,” said Theobald. “College professors and instructors already have so many demands on their time — mentoring graduate students, applying for grants, conducting research, writing papers, grading, teaching. I understand that it’s a lot to ask them to flip their classes like this. So I advise people to start small and incorporate active learning techniques over time.”

The increasingly clear benefits of active learning may mean that colleges and universities, as well as professional societies, could provide incentives and assistance to professors and instructors who want to take the plunge, added Freeman.

“It’s time to reward people for getting good results in the classroom, because now we see that the benefits are even greater than we thought,” said Freeman.