Shout out for Bull Trout

POCATELLO – Atomic City native and Idaho State University graduate student Zane Stephenson never guessed he’d be studying Bull Trout for his master’s thesis in the shadow of Idaho’s highest peak, pretty close (as the crow flies, about 80 miles) to his own backyard.

But, in between pursuing his passions for bull riding and wrecking demolition derby cars, Stephenson, 25, always knew he wanted to learn more about Bull Trout and work for their conservation. 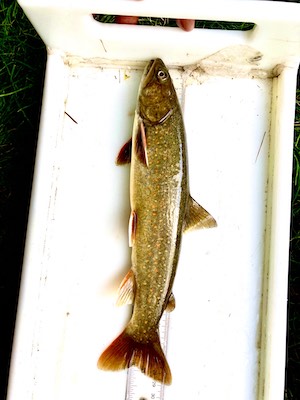 When he was in Borger, Texas, attending Frank Phillips Community College on a bull riding scholarship and earning his associate’s degree, he did a research report on Bull Trout because it was a species he was always curious about. Bull Trout are actually a species of char in the genus Salvelinus. Historically, Bull Trout have been presumed to be the same species as another char that inhabits Northwestern waters named the Dolly Varden. However, genetic tests have shown that Bull Trout are actually a different species and more closely related to the white-spotted char found in Japan than they are to Dolly Varden char of North America.

“I’d like to give a little bit of a shout out to Bull Trout,” he said. “They are very fascinating and are known to be an aggressive, piscivorous species. They are thought to eat other fish and they haven’t gotten a lot of glam because they prey on Chinook Salmon and Steelhead eggs, fry and smolts. At one point in time there was actually a bounty on Bull Trout.”

The Bull Trout is now a fully protected species and is listed as threatened by the Endangered Species Act. In Idaho, fishing for them is strictly catch-and-release, no harvest of them is allowed.

“Their abundance has been reduced drastically and there are a lot of people in Idaho that I’ve talked to that have never heard of a Bull Trout or that it is a native to the state” he said. “It is just a super cool, under-appreciated species. I would say to people they should respect the Bull Trout and the conservation efforts to rebuild their populations.”

After he returned to Idaho and earned his bachelor’s degree in biology at ISU, his fate to study bull trout was set when he chose to enter graduate school. 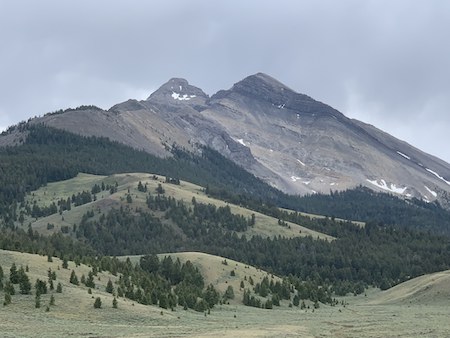 “When Dr. (Ernest) Keeley, mentioned this Bull Trout project, I had no doubt this is the one I wanted to do – ‘put me on the Bull Trout project,” said Stephenson, who grew up on a farm 10 miles southeast of Atomic City and attended Snake River High School outside of Blackfoot. “I am very grateful to be a part of this amazing program and work under a renowned fish ecologist like Dr. Keeley.”

For the last two summers, while working at ISU’s Department of Biological Sciences in the Fish Ecology Lab, Stephenson has been studying Bull Trout foraging behavior during day and night periods using in-stream videography of Mahogany Creek,  and the East and West forks of the Pahsimeroi River located on the east side of the Lost River Range.

“These streams make up the headwaters of the Pahsimeroi River,” he said. “They are right underneath Mount Borah. I pretty much stare at Mount Borah all day.”

Stephenson will finish his field work this fall after spending four to five days a month in the field collecting data on the fish and their habitat for the last two years from July to October. This field work consists of placing waterproof cameras in the streams to observe Bull Trout feeding habits and fly fishing for them in order to examine their stomach contents using a non-lethal gastric lavage technique 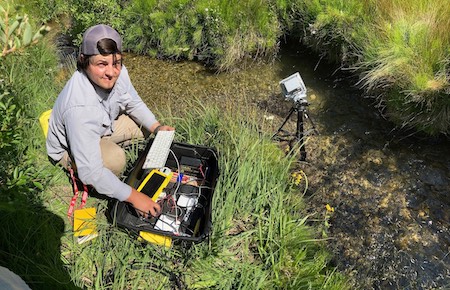 “All my fish samples are done from hook and line,” he said. “I angle pretty much all day long when I am up there after I put my cameras in”.

He built his own fly rod and ties his own flies for angling. Fishing pressure for bull trout is light because of the zero-limit regulations. Bull Trout in these streams stay fairly small, rarely exceeding 16 inches. Once he catches the fish, he flushes their stomachs to examine and record what they have recently eaten. The fish are then released unharmed.

The cameras he’s placed in the streams are commonly available GoPro Hero cameras connected to small computers that have been programmed to control them to record for 10 minutes at the top of each hour during a 24-hour period. 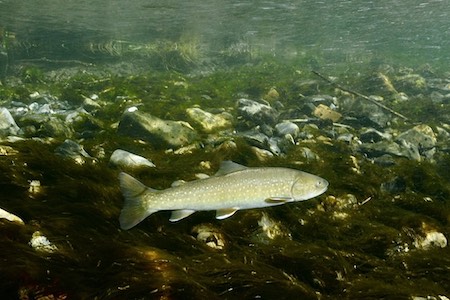 “My research is on the foraging behavior of Bull Trout and how they adjust their behavior to changes in diel and seasonal  shifts in food availability. Basically, I measure on average how many invertebrates are available during the day and night over the summer to fall growing season,” he said. “Then I examine how these fish adjust their behavior to changes in water temperature, light levels, and food availability.”

Bull Trout and other char species have been shown to have the ability to forage more efficiently under low-light intensities than other salmonid fish species. This is thought to be because Bull Trout have higher counts of low-light sensing rod cells in their eyes, so they may be able to see better at night than other species. Also, during the night, there is more invertebrate activity in streams so there is more food available to the fish.

“If Bull Trout can effectively forage in low light intensities then it would be more efficient for Bull Trout to forage during the night because there is higher food availability,” Stephenson said.

Bull Trout are the only salmonid species that inhabits these upper stretches of the Pahsimeroi River because of its cold-water temperatures. Bull trout require temperatures below around 39 degrees Fahrenheit for spawning and have peak metabolic activity around 52 degrees Fahrenheit.  Sculpin are the only other fish in these streams, along with aquatic insects and other invertebrates.

Stephenson thinks the majority of the Bull Trout he is studying are fish that spend their whole lives living in these streams without migrating to larger waters. He thinks that there are a few “fluvial” Bull Trout, those that live in larger waters and then come up to smaller tributaries to spawn in the fall. The Pahsimeroi River hosts the southeastern most population of Bull Trout in their current range, that stretches from Northern California on up into Alaska.

“Any research on the behavior of animals can aid in conservation and management practices,” Stephenson said. “I hope that managers of different watersheds can use the data I’ve collected to help conserve Bull Trout. It is a species that doesn’t have a whole lot of research on them, and so any little bits of information help with conservation efforts.

“It is tough for Bull Trout,” he continued, “they are a cold-water species and water seems to only be getting warmer. Their range has significantly shrunk and a lot of that could be contributed to anthropogenic (human) activity.”

One quote that has always stuck with Zane is from Dr. Seuss that reads “Unless someone like you cares a whole awful lot, nothing is going to get better, it’s not.”

Second Photo: A Bull Trout in a measuring tray.

Third Photo: View of the northeast side of Mount Borah.

Fifth Photo: A Bull Trout in its environment.