POCATELLO – Among the lessons that Idaho State senior Alec Lepisto is learning working in physics Associate Professor Dustin McNulty’s lab is a physicist just can’t be a physicist.

“I’ve heard Dr. McNulty say no one is just a physicist, you are also a computer scientist, an engineer and all these other things that go into doing the research like we do,” said Lepisto, a fifth-year senior with a double major in physics and mathematics. 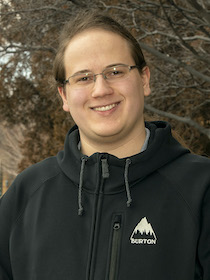 McNulty’s lab is devoted to the understanding of the physics of fundamental nuclear structure. In it, he and his students are designing particle detectors for a much larger, long-term physics project, the Jefferson National Laboratory’s MOLLER Experiment, in which scores of physicists and other scientists are collaborating.

“I think it is a great opportunity to see how, in various ways, how these huge, very important projects get dispersed,” Lepisto said. “Here at ISU, we are one of many teams that are all working on it, so we are in charge of a specific component of the project and the big picture is interesting, it is what I love in physics – figuring out these precise fine details of how the universe works.”

But while helping to figure out these fine details, he is learning things he never imagined he would in a physics lab, by helping design parts of the lab’s detectors using 3D-modeling software and printing them out on the 3D printers in the lab.

“I got to pick up other skills, like the programming I had to learn for our 3D-modeling design and how to operate 3D printers – it is just incidental stuff to doing the work,” Lepisto said. “You look at the physics differently. It is a valuable opportunity to see how working physicists actually operate, how the day-to-day works.”

“I would have never expected,” he continued, “to learn 3D modeling and running the 3D printers. It turns out it is something I like doing.”

Lepisto, who plans to pursue a doctoral degree in physics after he graduates in May, said he is grateful for the opportunity he has had to work in McNulty's lab.  Lepisto said he is more interested in exploring the theoretical side of physics than the experimental, but whatever direction he chooses, the experience in the lab has enhanced his education.

The Chubbuck native said he was grateful he has been given the opportunity to work in McNulty’s lab, which regularly employs undergraduate and graduate students in high-level research.  This is among the many other opportunities he has discovered at ISU along with participating in the ISU Honors Program, indulging in his love of writing and minoring in philosophy “in an excellent philosophy program”

“There are a lot of opportunities (at ISU) for all facets of an individual’s life,” he said. “You can make room to pursue every part or your character.”