POCATELLO – It can be kind of hard doing field work in the mountains of the American west from California to Wyoming when you are stuck in Zurich, Switzerland, working remotely because of the coronavirus pandemic. Epic wildfires of historic proportions don’t help, either.  And then there are just a whole lot of other things 2020 can throw at you.

Adjusting to the coronavirus pandemic has been a challenge for most students at Idaho State University in 2020 – from having to take classes online or in hybrid online/in-class model to wearing masks in classes and forgoing all fall NCAA sports – but for international post-doctoral fellow Leonie Kiewiet the logistics have been even more challenging.

“Well, let’s see, the pandemic first of all delayed my arrival here by three months, which is pretty considerable for an 18-month fellowship,” said Kiewiet, a Dutch citizen from The Netherlands who finished her doctorate at the University of Zurich in Switzerland.

While earning her undergraduate and master’s degrees from the Free University in Amsterdam, and then her doctorate in Switzerland, Kiewiet, a hydrologist, had come in contact with ISU’s Sarah Godsey, a geosciences associate professor, at conferences and the two had similar research interests. 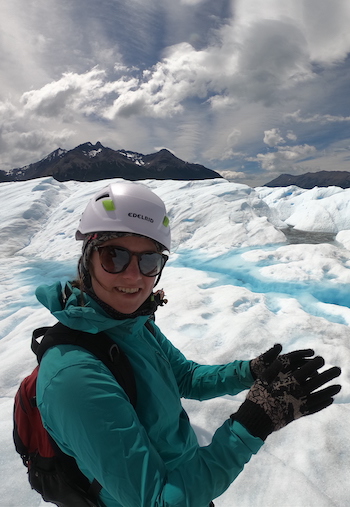 “I found her a really inspiring person and a really good scientist, so I thought ‘ok, if I stick to somebody like that I can’t go wrong,’” Kiewiet said. “I reached out to her and we were brainstorming ideas on what we could do. I told her about my interests and mentioned a fellowship that I could apply for, and that is how it started rolling.”

After successfully applying for a mobility fellowship at the Swiss National Science Foundation, Kiewiet planned to start at ISU in July of this year, but only recently arrived. Kiewiet is studying the rain-snow transition zones of watersheds across the American West to identify variables that influence subsurface water storage, and eventually, the amount of water in streams.

“One of the impacts of climate change is that it will snow less frequently and rain more frequently. Understanding how the snowpack melts out, infiltrates into the soil and moves down to the stream is therefore important because this might change as we shift from snow to rain in a warming climate,” Kiewiet said.

But her research efforts have been hampered by the pandemic. Besides delaying her travel to the United States and forcing to work remotely from abroad, one watershed in Oregon was dramatically affected by wildfires this summer, the same fires that filled the sky with smoke in Idaho and Colorado when Kiewiet arrived in the United States in October.

“The lower part of the watershed at the Oregon field site burnt, and also parts of the surrounding villages,” she said, although the rain-snow transition zone of the drainage in the H.J. Andrews Experimental Forest between Eugene and Bend, Oregon is intact and she might be able to study it this winter.

Besides the Oregon site, she hopes to do field work at the Reynold Creeks Experimental Watershed in southwest Idaho, a watershed in the Blair Wallis area of Wyoming between Laramie and Cheyenne, and Sagehen Creek in California’s central Sierra Mountains near Lake Tahoe. She is confident she’ll get to do work at the first two sites, less confident she’ll be allowed to do work at the latter two sites because of restrictions in place because of the pandemic.

Since her delayed arrival to the United States, Kiewiet has been able to finally visit some of her field sites, including the Reynolds Creek site in Idaho. She found the desert country of southwestern Idaho a great contrast to the steep, forested mountains of Switzerland.

“The Reynolds Creek Experimental Watershed is really large and you can see just so far everywhere because it is so dry and there are almost no trees,” she said. “It was very strange for me.”

She’s also had the opportunity to help out with fieldwork at the Gibson Jack drainage near Pocatello, and got to visit Yellowstone National Park as part of a research project in November after it was closed to the public. But she’s had to wear a mask during most of her interactions with her new colleagues and with people she’s met in a new country.

“I think my experience has definitely been influenced by covid,” she said. “People are just keeping a bit more distance, which is good, but it also feels a bit more distant. It’s different to look at somebody with a mask or without a mask. Despite this, I feel welcomed and people have been very kind and helpful.”

And it is not just the coronavirus pandemic and countryside that is different, after all, she’s operating in a different culture from what she is used to. Some differences between the Netherlands and Switzerland she recounted, when asked, included that there are many fewer people walking on the streets and where she’s from she could bicycle to about any place she needed to be. And the shopping is definitely different.

“I’ve found the supermarkets here are enormous and the packaging is so large,” she said. “I’ve never seen a shampoo bottle so big.”

Kiewiet also arrived for the last five weeks or so of the U.S. elections and noted differences in campaigns in Europe versus those in the United States.

“It was definitely interesting,” she said, “For instance, there are flags and signs in yards, something you wouldn’t see in the Netherlands, where maybe you see a poster behind a window. It is really different. And I think this was a particularly tense election.”

Another cultural phenomenon she has found in the United States is the spirit of collaboration in the scientific community.

“The people that I have met seem very capable and what I think is interesting for the international community is that people, generally in the States, but definitely at ISU, are very accommodating and willing to share and collaborate. They are trying to work together rather than trying to compete,” she said.

“I am not saying,” she continued, “they are not competing or doing high-standard research, but they are just engaging, trying to solve scientific questions together, whereas sometimes in Europe I found people are more focused on their own thing and maybe a little bit less willing to share what they find out.”

The Dutch scientist said she has benefitted from this practice.

“It is not just a theory. Openly sharing data is super important, and it is helping me a lot,” she said.