POCATELLO – Leif Tapanila, Idaho State University geosciences professor and director of the Idaho Museum of Natural History, is a co-author on a scientific paper published this summer in the Bulletin of the American Museum of Natural History that describes the Trans-Saharan Seaway in Mali, Africa, and the strange creatures that existed there 50 to 100 million years ago.

That work revealed a host of previously unknown marine creatures from Mali’s unexplored fossil record and an environment then that is “just the opposite” from what it is now.

The study, led by Maureen O’Leary at Stony Brook University in New York, is a synthesis of 20 years of research done by large scientific teams that headed to Mali to study its geology and paleontology.

During that ancient era, what is now the infamous Saharan Desert was a shallow ocean that ran through the center of the African continent, from the Mediterranean Sea to the South Atlantic Ocean.

“It was a warm, tropical ocean absolutely teeming with life,” Tapanila said. “We have all the kinds of seashells you might expect along the coast, clams, giant oysters and sea urchins. There’s beautiful preservation out there. The marine life included all sorts of predatory fish and sharks. We found large-bodied turtles, crocodile-like animals and we have one of the largest snakes (24 meters long) ever in earth’s history.”

Overall, there was something unique about the animals that were found here. 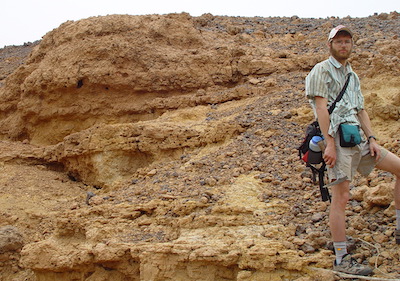 “You can find similar assemblages of animals elsewhere, but what is special about Mali is that they got to gargantuan size,” Tapanila said. “For reasons we can only speculate, they get really big in body size. We call that ‘gigantism’ and it might relate to being isolated in a warm seaway in the middle of the North African continent.”

The team made expeditions to Mali in 1999 and 2003, and then had to quit another while in the country in 2008 because of threat of political instability and attack by extremist groups. Tapanila was a participant in the latter two trips, which featured 125-degree heat, machine gun-toting guards, broken-down trucks, fantastic fossil creatures, a rotting camel and desert floods.

“This was the greatest adventure of my life,” Tapanila said. “In retrospect, I was younger and maybe more willing to take some risks at the time.”

Tapanila was invited on the trips because of his expertise in invertebrate paleontology and his ability to speak French. Mali is a former French colony and French is the language of business there.  Tapanila was one of only two people on the team that spoke fluent French.

The 2003 trip was challenging as the group spent days driving, often in roadless areas, out in the open desert searching for rock outcroppings that would hold fossils. Tapanila remembers being continually thirsty, drinking about 4 liters of hot water or tonic water a day to quench his thirst that rarely felt satisfied. There were “constant problems” with vehicles breaking down. Ironically, in one of the driest regions in the world, the team was plagued by a flood. It doesn’t rain in Mali much, but when it does, nearly the whole years’ worth can happen in one day. 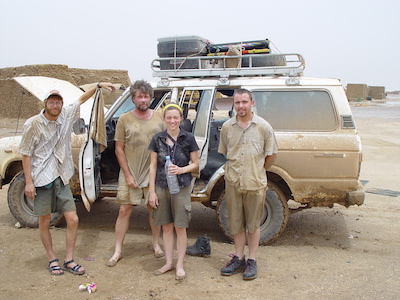 “All the valleys where the roads should be get flooded out and there’s nothing, so drivers are just kind of driving through a lake,” Tapanila said. “And one of the trucks blew a rod and was completely disabled and we had to hike through the lake barefoot, with things floating by and who knows what else swimming in there with us. And, yeah, it was harrowing.”

The scientists were looking for ancient animals but ran into a few modern ones, including a large predator.

“We were checking out a dead camel that caught our interest, it smelled really horrible, and about 10 minutes later a hyena runs out of its den towards us,” he said. “We start screaming and it runs away. Stuff like that. It was good times.”

For the researchers, the field work, was only the start of their project.

“Working through all the material on the back end has taken a lot more time and detail,” Tapanila said. “You spend your couple of months in the field and then the work really begins.”

He said a lot of time is spent working in the lab analyzing the fossils, comparing them to previous literature, and describing them in context with their environment. These descriptions form the basis for future research.

“Digging through the literature and sleuthing, that takes a lot of time,” Tapanila said. “People like us are in the profession because we really like that part of it. We like a good mystery, and we like to find the information and solve the problem as thoroughly as we can. This paper represents two-decades worth of expeditions, data collection, and synthesis of all of that work.”

The title of the paper was “Stratigraphy and paleobiology of the Upper Cretaceous-Lower Paleogene sediments from the Trans-Saharan Seaway in Mali.”