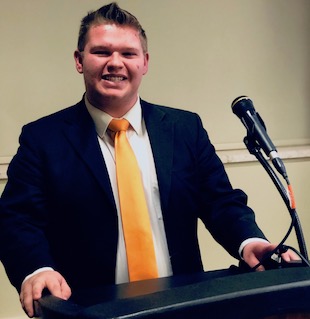 Freshman Jett Smith, a communication major from Pocatello, tied for third in the varsity semi-final round of the competition at Louisiana State University’s Shreveport Campus.  Bengal debate sophomore Kaden Marchetti, a computer science major also from Pocatello, made the varsity octa-final bracket (top 16 competitors).  There were 288 competitors from 42 universities that participated.

In team debate, both ISU entries cleared into the octafinals, but lost elimination rounds.  ISU’s Conner Coutts and Nate Mortimer joined the Bengal pairing of Marchetti and Smith but were all eliminated in the octafinal rounds. Coutts is a junior studying secondary education; Mortimer is a senior majoring in political science.

“This was our first try at the IPDA Nationals. We are very proud of the team,” said Sarah Partlow-Lefevre, the team’s head coach.

Of the team’s speaking honors, assistant coach Andy Christensen said, “I am immensely pleased with the quality of speaking the squad is delivering on the regional and national stages this spring. Their commitment to refinement and caliber of presentation is evident.”

The Bengal’s final spring competition will be an online sweepstakes tournament April 29.

The ISU Rupp Debate Team is supported by the James A. and Sharon E. Rupp Foundation, The ISU College of Arts and Letters, and the ISU Department of Communication, Media, and Persuasion.