POCATELLO – Two graduate students at Idaho State University earlier this month helped discover a new ocean vent field on the deep-ocean floor off the coast of Oregon, a finding that has implications for searching for life on other planets.

“We are interested in studying ways we can learn about possible microbial life on other worlds, so we study our ocean world,  and we expect that there are likely similar deep-sea vent systems on other planets and moons,” Shields said. “When you have these vents, those are the spots where microbial life thrives because of the heat and the elements coming out in hydrothermal fluids. So if we can figure out what makes Earth’s deep-sea vent systems tick, then we would have a better idea of what we should look for if we have a mission to another ocean world such as Enceladus, one of Saturn’s icy moons.” 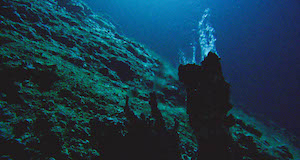 “We can’t physically be at the bottom of the Pacific so we were relying on remotely collected bathymetric data from an autonomous underwater vehicle collected over 10 years ago,” Garcia said.

This bathymetric data is displayed as a color corresponding with its elevation and does not include any photos of the ocean floor. The pair of ISU student researchers used 3D-visualization software at the Rhode Island Inner Space Center to identify potential sites of hydrothermal fields.

“We took that bathymetric data and put it into a 3D-visualization software, with this technology we were able to immerse ourselves into the foreign environment and study the terrain” Garcia added. “Ashley and I populated a series of potential hydrothermal vent field locations, with precise coordinates including latitude, longitude and depth.”

These coordinates were forwarded to a SUBSEA remotely controlled submarine operated by  NOAA. That submarine had an hour to go to one of the locations the ISU researchers had identified as a potential site and  take photographs and videos. These images revealed the Apollo Vent Field with five minutes to spare, at a depth of about 2,700 meters, about 1.6 miles down. The ISU researchers were thrilled by the discovery.

“It was amazing,” Shields said. “I was shocked when we actually found it because we had been driving around, and other than the spots that were already known, we weren’t finding  anything. But it was incredible when they found it and I was just so excited about the opportunity.” 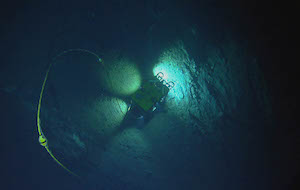 When they saw the live video feed of the vents being discovered, Nawotniak said that there was a lot of fist-pumping and cheering.

“I think it is really powerful that two ISU students were a main driving force for this very important scientific discovery,” Garcia said. “So that joy and excitement came from true exploration.”

Nawotniak said that researchers have been returning to a neighboring hydrothermal vent field, the Sea Cliff deep-water site off the coast of Oregon, regularly since the extensive bathymetric data was collected in the early 2000’s because the area is important for understanding ocean life and life on other planets.

“So now to have another area nearby that can be a comparison point is huge,” Nawotniak said. “The fact that these two were able to find this using the bathymetric data is impressive. They actually used some of their own code to be able to analyze and understand the shape of the sea floor. This just wasn’t them throwing a dart at map, they  really put their heads together and  were able to demonstrate how useful the data is. They were able  to get up some really great clues that changed what we know about that area.”

Nawotniak said the new discovery was named Apollo in honor the 50th anniversary of the moon landing this year and because the project is funded by NASA as part of space exploration.

“I think it is pretty cool we can  be using these unknown frontiers on Earth to help  us plot out the course for new frontiers  in space,” Nawotniak said. “I don’t think people realize at what extent students at Idaho State University are helping the future of space exploration. We have had quite a few different projects in geo and bio, across this university and it is easy not think  of us as an ocean-faring university or a space-faring university, but we have students here that are rocking the world in all those dimensions.”

This discovery was originally reported by June 8 by SUBSEA and more information is available at https://spacescience.arc.nasa.gov/subsea/#

This discovery was made during a NASA mission to the deep sea, called the Systematic Underwater Biogeochemical Science and Exploration Analog, or SUBSEA for short. In 2019, SUBSEA is exploring Gorda Ridge, an underwater volcanic zone located in the Pacific Ocean, about 75 miles off the U.S. coast where California and Oregon meet. This environment shares key characteristics with Saturn's moon Enceladus. The team is looking for signs of microbial life in the warm springs emanating from the volcano and studying the conditions that make life possible here. This work will help understand the potential for other ocean-bearing worlds in the solar system to support life and will inform designs for future deep-space missions. SUBSEA is a partnership between NASA Science Mission Directorate PSTAR Program, NOAA Office of Ocean Exploration and Research (OER), Ocean Exploration Trust, and multiple academic research centers.