Beachboard was selected to participate in the Fulbright World Learning program. She worked this fall with the Kosovo Women’s Network in Pristina. The appointment was arranged by the U.S. Embassy in Kosovo.

“I had been in interested in this region of the world for a long time,” Beachboard said. “The work of this women’s organization struck me as especially important in these post-war years.”

Kosovo, part of the former Yugoslavia, was at war with Serbia in 1998-99. Its citizens still struggle with events and effects of the conflict, including rape, torture, war dead, persons missing in action and economic challenges. 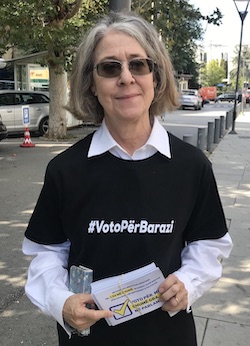 The Kosovo Women’s Network is a non-governmental organization with 157 member organizations, and Beachboard was able to work with some of their representatives as well.

“Kosovo Women’s Network is an effective and high-profile NGO,” Beachboard said. “It was a privilege to help them hone their skills. The timing was good, because they had several new employees working in public relations and social media.”

“It was an adventure,” she said. “Traveling always is.”

She said she benefited from the popularity America gained by intervening in the war during the Clinton Administration.

“Bill Clinton and Madeleine Albright are honored with statues, plaques and street names in every major city,” Beachboard said. “I hope my visit there reinforced positive international relations in some small way. Several Kosovo Women’s Network colleagues have promised to keep in contact, some regarding future collaboration, some just as friends.”

She added that it was satisfying to travel while making a contribution to society, not just as a tourist.

“Working with Professor Beachboard was very helpful,” said Rudina Voca, a public relations intern at Kosovo Women’s Network. “She has remarkably mentored me in communication skills and the writing process. I am very grateful for having the opportunity to work with such an exemplary and visionary mentor.”

Mirjeta Dibrani, a grants assistant at the network, said Beachboard was able to simplify communication-related issues.

Beachboard taught advertising, public relations and newswriting at ISU for 15 years. She was formerly a journalist in Arizona. She then worked as public relations manager and website editor for the University of Maryland University College European Division in Heidelberg, Germany.

Recipients of Fulbright awards are selected on the basis of leadership and contributions to society as well as expertise in their fields. The program is administered by the U.S. Department of State’s Bureau of Educational and Cultural Affairs.

College of Arts and LettersUniversity News