POCATELLO – Santa Catalina Island is known for its glass bottom boats, scuba and snorkeling spots, and panoramic views of the pacific, but to Idaho State University biological sciences Assistant Professor Devaleena Pradhan, the island is known for the Bluebanded Goby fish.

Bluebanded Gobies are unique in many ways, but what makes them so important to Pradhan is their sex changing abilities. The Bluebanded Goby, also known as the Catalina Goby, is a bidirectional sex changer, meaning it can change from male to female and back again.

Pradhan, along with her master’s student Katrina White, spent five weeks in Catalina at the University of Southern California Wrigley Institute for Environmental Studies researching these unique fish using molecular biology tools combined with hormone analysis to analyze the question of behavior and reproduction. 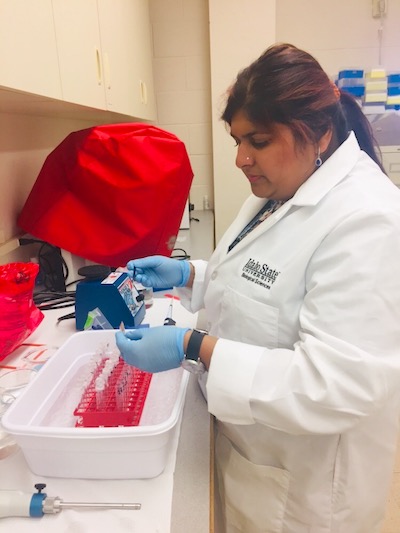 Pradhan’s research looks at the hormones and behaviors of these fish before, during and after their sex change.

“We collected fish from the ocean and took them back to the lab,” Pradhan said. “We then put them in small groups to mimic ocean life. There was one male and two females per group. After some time, we removed the male and watched for hormonal changes in the females.”

According to Pradhan, not long after the male was removed from the group, the most dominant female began experiencing hormonal and sex changes.

“The females live in hierarchies,” Pradhan said. “There is an alpha female, a beta female, a gamma female and so on. When the dominant male is removed, the alpha female begins its transition from female to male.”

After this change occurred, Pradhan looked at hormonal levels in the water and began dissecting some of the fish to look at their different body parts.

“Fish and humans share many of the same hormones,” Pradhan said. “Fish are easy to study because you can induce changes naturally. This study allows us to look at how the behaviors of Bluebanded Gobies are similar to that of other species.”

Pradhan not only conducted research on Bluebanded Gobies as they go through sex changes, but also their unique reproductive behaviors.

“The male takes care of the eggs in the summer,” Pradhan said. “If the males aren’t there, the females actually come eat the eggs.”

Pradhan simulated this in the lab using PVC tubes. The females entered the tube and laid their eggs, and the male took care of the eggs until they hatched.

“I was looking at male parenting behavior,” Pradhan said. “I was monitoring hormones and looking at what was affecting the behavior.”

Though Pradhan’s summer was jam packed with research, her and White still found time to share their research with the public.

“One of the highlights of our time was called Saturdays at the Lab,” Pradhan said. “The Wrigley Institute for Environmental Studies does a lot of education and outreach efforts. Saturdays at the Lab allowed the public to come into the lab, and for my grad student to share the research she was doing.”

White, who is pursuing her master’s degree in Biological Sciences, will present the work that she and Pradhan did at a conference in Austin, Texas in January.

While conducting her research, Pradhan collected hormone and tissue samples that she continues to work on back at ISU. She has plans to return to the Catalina Island next May to continue her field research.