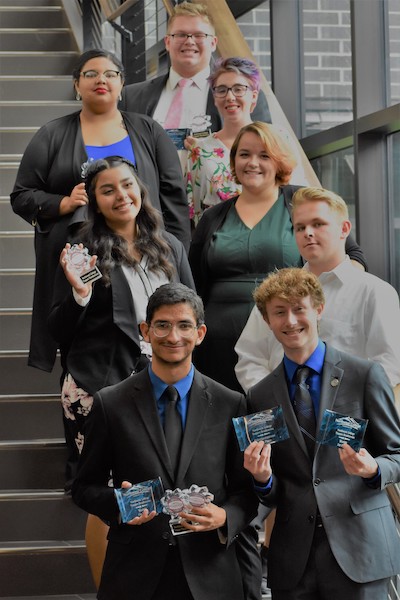 Junior Kaden Marchetti, Pocatello, and his partner freshman Joseph Tyler, Idaho Falls, convinced a three-judge panel that action is preferable to adaptation on the matter of global warming.

ISU novice Ricki Misner, Pocatello, earned a spot in the quarterfinal round of International Parliamentary Debate, but narrowly missed advancing to semi-finals.  Misner, who is studying criminology, argued on the topic “self-checkout lines do more harm than good.”

“When we review a list of accolades like this, we always pause to recognize the commitment of our competitors,” said Andy Christensen, assistant director of the program. “Our group makes up only a few of the 97 individual forensic speaking entries and more than 45 team and individual debate entries at a tournament. Competing all the way to an award in that large a field demands tenacity.”

The Rupp Debate Team is supported by the Associated Students of ISU; the ISU Department of Communication, Media, and Persuasion, and the College of Arts and Letters.