POCATELLO – It is only fitting that many of the Idaho State University Civil and Environmental Engineering students who helped build the new Structural Laboratory at the Engineering Research Complex would be the first to test their equipment.

The students, competing in the Precast/Prestressed Concrete Institute (PCI) Big Beam contest, tested the strength of their 21-foot long cement bridge beam at the Structural Laboratory using equipment that can produce forces in excess of 1 million pounds collectively. 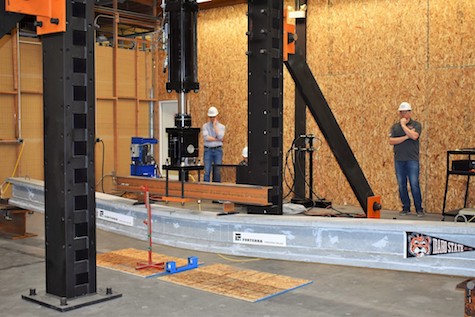 The students were judged on report quality, design accuracy, lowest cost, lowest weight, largest measured deflection at maximum total applied load, most accurate prediction of deflection, cracking load and failure load. They were also judged on the beam’s practicality, innovation and conformance with code. During testing, the beam was stronger than predicted and the students were close in predicting its deflection value.

The students, who tested the beam in late May, easily met the contest deadline to have their results reported by June 15. The team will receive word on how they fared in the competition this fall. They are competing against students at large universities such as Notre Dame, Iowa State and Oregon State Universities.

Mashal said he was also pleased by the performance of the lab’s equipment.

The students’ beam was tested as a simply supported 20-foot span, with the overall length limited to 22 feet. The beam was designed so it would  not crack below 20,000 pounds of loading and was designed to fail within the range of 32,000 to 39,000 pounds. 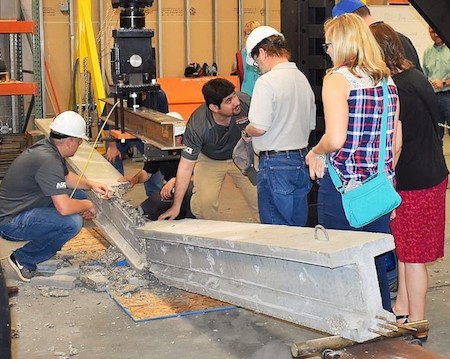 The winning team in the Big Beam Competition will receive free travel, accommodations and registration for the 2019 PCI Convention and National Bridge Conference in Louisville, Kentucky. Prizes will be awarded to the top 20 submissions. Prizes will also be awarded to students who have the best report, which should demonstrate learning and application of sound engineering judgement and to students who have the most entertaining and creative video.

The ISU team is sponsored by Forterra Structural Precast in Salt Lake City, Utah for the 2018 PCI Big Beam Competition.

A video of the ISU team’s beam being tested is available online at https://www.youtube.com/watch?v=8t98QGkq2YE.