POCATELLO - The overuse of opioids is an area of significant concern for a multitude of organizations and agencies across the state of Idaho, the United States, and even the world. Those in the healthcare professions at Idaho State University (ISU) are working to be a part of the solution by conducting research, making changes to their curriculum, and encouraging partnerships with other groups who are working toward the same goal: combating the ever growing opioid epidemic.

ISU’s Kasiska Division of Health Sciences (KDHS) annual Research Day, held April 20, brought together four such groups to help progress the conversation and efforts toward making changes, across a multitude of platforms, that would help reduce the number of people who struggle with Opioid Use Disorder (OUD). The Idaho Department of Health and Welfare, the United States Department of Justice’s Drug Enforcement Administration (DEA), the Boise Veterans Affairs (VA) Medical Center, and Terry Reilly Health Services, along with ISU, all agree - there is no “one size fits all” solution. Research has shown rather, a multimodal effort to prevent patients from developing and treat those struggling with OUD, is most successful.

John Holmes, PharmD,  assistant professor at ISU’s College of Pharmacy,  and co-chair of the 2018 event, says this year’s Research Day theme focused on OUD because it “is an area of significant interest from both a policy perspective and research perspective, because it’s unique in that we as health care professionals have contributed very significantly to this problem, and now we are trying to fix it.” Holmes further explains that the theme of Research Day 2018 spawned from the Kasiska Division of Health Sciences’ core value to encourage a holistic approach to health by “emphasizing a comprehensive view of human health, including curative and preventive dimensions.” 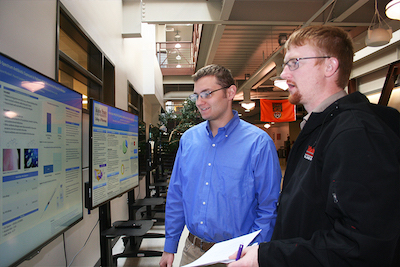 By connecting healthcare professionals and government entities, the day of research also worked to fulfill the KDHS goal area to promote and provide interprofessional health services to the community. Holmes says, “The Kasiska Division of Health Sciences is very much engaged in numerous quality improvement fronts to try to work with practices and community members to implement quality improvement strategies to improve healthcare in general. So some of this could be to improve prescribing practices of opioids in other healthcare facilities.” Holmes added, “We chose the theme of the opioid epidemic this year because it is something that transcends all healthcare professions. Whether you’re counseling, dental hygiene, pharmacy, PA, it really does cover a litany, and almost all health profession practices have some role to play in this issue. It is a good, holistic topic area that we identified as something everybody could benefit from.”

According to the National Institute on Drug Abuse, “opioids are a class of drugs that include the illegal drug heroin, synthetic opioids such as fentanyl, and pain relievers available legally by prescription, such as oxycodone (OxyContin®), hydrocodone (Vicodin®), codeine, morphine, and many others.” Holmes says a major problem with opioid use disorder is that it can result in addictions to other drugs, like heroin, and “because they are easily accessible, can contribute to a long chain of events and ultimately result in people becoming abusers, and addicted to other agents that are more commonly referred to as street drugs.”

In terms of ISU’s commitment to providing a solution to the opioid epidemic, Holmes says education is key, both for students and those already practicing medicine in Idaho. “Generally speaking, most prescribers are receptive of the fact that there is a problem with opioid misuse, and that we as prescribers and healthcare professionals have contributed to this problem,” he explains, but “working to limit prescribing of the drugs, or implementing more appropriate prescribing practices of opioids is a difficult change to make, especially for more seasoned prescribers. Number one it is important that in an educational setting, like our training of students and our training of medical residents and pharmacy residents at ISU, that we focus on preventing those poor prescribing practices before they start. It’s easier to prevent poor prescribing practices before they occur than it is to change prescribing habits and practices that already exist.”

The Idaho Department of Health and Welfare (IDHW) is working on a 4-part strategy to combat opioid overuse, called Idaho’s Response to the Opioid Crisis, or IROC. The program works to provide opioid treatment and recovery support services to those with OUD, increase accessibility for both doctors and communities to resources that will assist in reducing the incidences of opioid misuse, making changes to the way healthcare providers prescribe opioids to their patients by educating providers on use of a Prescription Drug Monitoring Program (PMP), and increasing the use of drugs that can help reverse opioid overdoses through training of first responders and other community members. Marcia Witte, MD, public health physician for IDHW, told the crowd of mostly ISU students at Research Day that IROC has provided treatment funding for over 400 people to date. 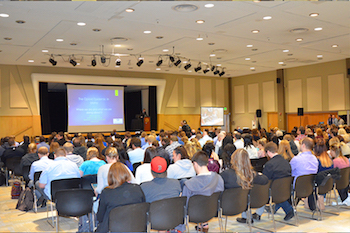 Although they are not administered or overseen by the DEA, this agency also encourages states to utilize a statewide PMP, which according to their website, is “a database which collects designated data on substances dispensed in the state.” Idaho’s PMP is administered by the Idaho Board of Pharmacy. Chuck Wahl, a DEA supervisor at the Boise based Seattle Field Division, says the agency is committed to finding additional solutions to the worldwide opioid overuse problem, and incarcerating those with OUD isn’t the best solution. While it sometimes may be necessary for the safety of those with OUD, and those around them, Wahl says “we will not arrest our way out of this epidemic.” Speaking from ISU-Meridian, Wahl provided a staggering statistic on the use of pain relieving medications in the United States: ‘While the US population makes up just five percent of the world’s population, we consume 99 percent of the world’s hydrocodone and 85 percent of the world’s oxycodone.”

There are a number of treatment options for OUD, but Terry Reilly Health Services general internist Dr. Magni Hamso suggests that medication-assisted treatment is the most effective. Detoxification followed by outpatient or inpatient behavioral treatment used to be the standard of care.  However, this treatment does not tend to be effective for individuals with opioid use disorder – and could be dangerous, as patients tend to relapse and, having been off opioids for some time during detoxification or inpatient treatment, are at particularly high risk of a fatal overdose.  Dr. Hamso suggests combining medication-assisted treatment, such as buprenorphine/naloxone (Suboxone) or methadone with behavioral interventions, is the most likely strategy to help those with OUD recover and avoid relapse.

In an effort to prevent opioid use disorder before it begins, Steven Pote, a psychologist at the Boise VA, says he works with patients to find alternative pain management options. As opposed to prescribing additional opioid medication for a patient struggling with chronic pain, Pote suggests these patients see a psychologist who is trained in providing chronic pain treatment, because “they are more likely to see when a patient may be glossing over the truth of their pain and their medication use.” Also speaking to the crowd at ISU-Meridian and shown live via video conferencing to the group in Pocatello, Pote provided a multitude of opioid alternatives that he has found are helpful for his patients. Some of these include exercise, physical therapy, relaxation and breathing techniques, and behavioral activation, which is helping patients find and reconnect with the activities that are fun for them, even if they are slightly modified from the ways they were able to participate in the activity before developing their chronic pain. He says “Motivational interviewing can also help individuals become more aware of their decision making process that can lead to alcohol and/or opioid abuse.”

As is tradition for the annual Research Day, following the panel discussion on opioids, ISU students and faculty in both Pocatello and Meridian presented research posters to their colleagues and peers. A multitude of healthcare related topics are covered every year during this portion of the event, giving students an opportunity to present their research findings in a professional setting. Organizers of the event plan to begin making arrangements for next year’s Research Day after the conclusion of this semester.