POCATELLO – The orange and black carrion beetle relieved itself on Christian Petersen’s hand and flew off. Prior to that action, the beetle had served a valuable role in helping Idaho State University anthropology faculty Petersen, a lecturer, and Amy Michael, visiting assistant professor of forensic anthropology, teach law enforcement officials how to find dead bodies. The presence of carrion beetles was a tell-tell sign than something was dead and buried in the area.

On Tuesday, April 24, ISU anthropology faculty and students gathered with law enforcement officials on a non-descript plot of land on ISU’s Red Hill next to I-15 in a patch of sagebrush and mixed grasses.

The group was examining three plots being used to train law enforcement officials --- including personnel from the FBI, Salt Lake City Evidence Recovery Team, a deputy coroner and the Pocatello, Blackfoot, Bonneville County police departments – on how to identify and preserve sites where bodies have been hidden or buried. One site included a buried fake skeleton, the second featured buried “skeletonized pig bone and mummified tissue” and the third a decomposing pig carcass that had been buried. Forensic evidence was also scattered on the surface of the area. The beetles were found at the third site.

“We found a bunch of those Nicrophorus, or carrion beetles, because they are attracted to the body. That’s the only reason they are here,” Petersen said.

A group of trainees and students were carefully excavating the roped-off area where the pig was buried.

“We had the pig buried out here in December and it is in an advanced stage of decomposition,” said Michael, who is a trained archeologist and forensic anthropologist. “That’s what is in this pit and in 20 or 30 minutes the mood might change here because it might smell.”

The site next to the freeway was chosen to mimic a clandestine burial site. 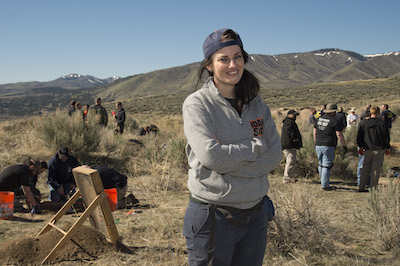 “Our site is pretty proximate to the interstate, it is a scrub brush area to something that a perpetrator would do very quick, just get a body out and away or just dump it on the surface,” Michael said. “So, what these participants are learning is proper archeological excavation methods.  When there is a shallow burial, you just can’t start digging into it or you are going to ruin the crime scene.  We are teaching them how to take each of these units down nice and level, record what they see, photograph it, map it, document it and then collect it.”

This grisly training isn’t strictly academic. ISU forensic anthropologists have worked with the FBI and local law enforcement officials as recently as in October in Fort Hall when they teamed up to recover the remains of a body.

“What initially started this training project was when we got called out with the FBI and these Salt Lake City guys for a case at Fort Hall in October,” Michael said. “It was a surface burial like this so we were able to help them find little pieces that they weren’t looking for because they weren’t trained osteologists. So that kicked off this – how can we better collaborate and learn from each other?”

ISU forensic anthropologists have also been called on to participate in missing persons and cold cases. Michael said when began organizing this training, she expected maybe six or seven law enforcement officers to participate, but 20 showed up.

“This training is fantastic,” said Dave Bodily, an FBI agent based in Pocatello whose territory includes 16 counties from the Utah border to the Montana border, and over to Salmon and Challis and down to Twin Falls.

“The most important thing for us,” Bodily continued, “is it actually highlights our limitations. We now have this liaison partnership so we know the experts to call. These guys are an absolutely fantastic resource. To have them this close and be able to reach out to them saves all kinds of time and effort”.

The training was also valuable to the two undergraduate and five graduate ISU anthropology students participating in the exercise.

“This training has been great because, first of all, we can help out local law enforcement,” Petersen said, “and, second of all, because this is a classroom and we get to give our students straightforward, authentic learning experiences. I love anthro and forensics, but I am an educator and any chance I can get a student to enjoy themselves and learn at the same time, it is great.”

Top Photo: Christian Petersen, left, ISU anthropology lecturer, and Amy Michael, ISU visiting forensic assistant anthropology professor, examine a carrion beetle collected at one of the training sites. The presence of the beetles indicated something was dead and buried nearby.