POCATELLO – Idaho State University researchers, including master’s students Adam Eckersell and McKenna Adams, are studying salmonflies on the Henrys Fork Snake River and Middle Fork Salmon River drainages, exploring everything from these insect’s social impact on humans to their importance for providing pigmentation that can color the feathers of songbirds that feed on them.

In late spring and early summer throughout the West on cold, fast-flowing trout streams, the salmonfly hatch is one the most anticipated events for fly fishermen and year-around the nymphs of this insect are an important to the diets of trout. This has implications beyond the banks of the rivers these insects hatch from. In the Henrys Fork watershed, which includes Fremont, Teton and Madison counties, sportfishing generates an estimated $30 million annually, compared to the $100 million generated annually by agriculture in these three counties, according to Eckersell.  Salmonflies, scientific name Pteronarcys californica, factor into this economic and social equation.

Eckersell’s research is designed to demonstrate the importance of an individual species’ contribution to preservation of biodiversity and to its ecosystem services, which are the benefits humans freely receive from the environment. 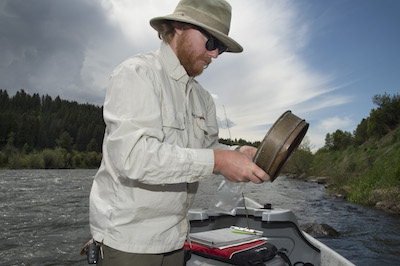 “The gist of my research is that I’ve completed social sampling and have started analyzing the data from 300 surveys with residents in the Henrys Fork watershed and I am still collecting fish diets and looking at the importance of emergent insects to trout, specifically how important salmonflies are to them,” said Eckersell, who is finishing up his second year of field research and hopes have his study wrapped up by next May.

During his surveys with residents, Eckersell posed questions such as if the residents fished in the Henrys Fork, if they knew what an aquatic insect hatch was and asked them if they could provide examples of what insect hatches occurred. Surveys also asked the general public what benefits they could receive from fishing, the importance of agriculture in the region and how water should be distributed.

“The beauty of this river is amazing, this is a pristine area,” said Eckersell, who is originally from Rexburg. “One thing that is really, really amazing about the Henrys Fork is how much of a tightly coupled social and ecological system it is. You have two main industries in the area, fishing and agriculture, and what is amazing is how good they are at sharing the water.”

He also noted the work done by the Henrys Fork Foundation, Friends of the Teton River, the Henrys Fork Watershed Council, Fremont-Madison Irrigation District, Idaho Water Resource Board and other stakeholders who together to share the water.

“We asked about the intangible benefits of the ecosystem, too, thing like the cultural heritage and sense of place, specifically ‘what does the Henrys Fork River mean to you,’ and it was interesting to me how many people just said ‘home, it’s home to me,’” Eckersell said.

On the river his work includes sampling 100-meter stretches of river bank to count the number salmonfly exoskeletons, called exuvia, that are left behind from these 2- to 3-inch long insects when the hatch. He also catches trout and then examines their stomach contents nonlethally to see what the fish have been eating. Of the trout he has sampled so far, about two-thirds of their diets have come from eating emergent insects, and the rest of the other third of their diets were of other fish, although Eckersell has not completed the diagnosis of all the collected samples, yet.  Besides stonefly nymphs and adults, he’s found up to 300 caddis flies in a trout’s stomach and has found fish gorged with sucker eggs.

“Last week we were sampling a stretch and there were a ton of sucker eggs in the trout diet,” Eckersell said. “Some people may think suckers are a trash fish, smack them on the side of the head and throw them on the bank, but they’re good for the ecology of the system.”

He has caught fish on fly and spin gear.

“It’s a huge perk being able to fish out here,” said Eckersell, who along with tech aides, floats sections of the Henrys Fork and then used his mountain bike to shuttle the car. “I mean, my field sites are gorgeous. I get to catch these fish, see what they’re eating and it is pretty amazing.” 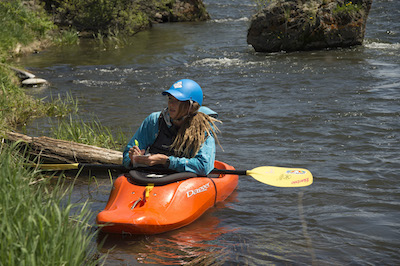 Another person who said she’s enjoying her field work is Adams, an Idaho Falls native, who is studying salmonflies on both the Henrys Fork and Middle Fork Salmon River drainages. She said that her study is comprised of two parts, looking at salmonfly emergence patterns in which they emerge near confluences to see if the temperature difference causes a change in the timing of hatches, and she is looking at the bird response to salmonfly hatches.

“Salmonflies are a known keystone species, which means they are really important for the ecosystem, and they are being lost in a lot of western rivers due to temperature changes, sedimentation, dams and interrupted flow,” Adams said. “We know the huge role they play in the diets of fish, but we don’t know about other species and we haven’t studied birds much to see what they are getting from the stoneflies. Just like fish gorge on salmonflies nymphs, birds take advantage of salmonfly adults and eat them as they fly to get specific nutrients like lipids or pigments that they put in their eggs or feathers.”

The bird species she is focusing the most on is the Western Tanager, that migrates 3,000 miles to come back to Idaho annually.

“When they get here, Western Tanagers need to feed soon to restore energy,” Adams said. “If salmonflies are lost, it could negatively affect the tanagers, and we already know the tanagers use the pigments from salmonflies for their yolks and those lipids can go into plumage to brighten their feathers, to improve their sexual reproduction.”

For the other part of her study, she is checking how temperature changes caused by tributaries affect the timing of stonefly hatches at confluence areas. Since hatches are temperature dependent, she expects that hatch would start earlier in a confluence area where warm water enters the main stem, and later where colder water runs in.

“As an Idaho native, I was so excited to study in Idaho in these beautiful places that are still wild and pristine, and we have some iconic species,” Adams said. “I think the opportunity to be here, to study out here and to enjoy this country is pretty lucky.”