POCATELLO – The honor for a winning prestigious research award was nice, but Idaho State University geosciences doctoral degree candidate Caitlin Rushlow enjoyed her time in the field in Arctic Alaska doing her research even better.

Rushlow was recently notified that she won an Outstanding Student Presentation Award at the world’s largest geosciences meeting, the American Geophysical Union Fall Meeting, attended by more than 20,000 scientists, that was held in December.

She is the lead author on the study, “Snowpack redistribution, vegetation feedbacks, and advective heat transport controls on ground thermal regimes and hydrologic response in zero-order hillslope drainage features.” Her coauthors were Sarah Godsey, ISU geosciences assistant professor, and Audrey Sawyer, assistant professor at the Ohio State University School of Earth Sciences. She also worked closely with Cliff Voss from the U.S. Geological Survey who has developed a new model that she's been using.

“Caitlin gave an amazing talk,” Godsey said. “Her science was solid, and she answered questions from a few top Arctic scientists in a genuine and professional manner. I'm proud of her, and also consider myself lucky to have the opportunity to work with and learn from such a great graduate student.” 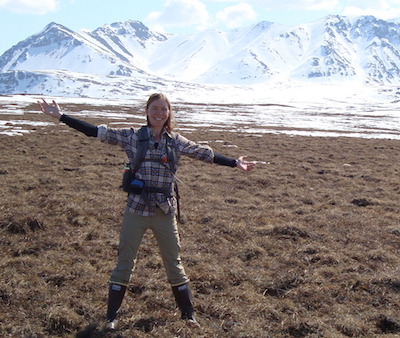 Rushlow completed her research for the paper in the Arctic, working out of the Toolik Field Station managed by the Institute of Arctic Biology at the University of Alaska Fairbanks.

Rushlow was selected to give a talk on her Ph.D. work at the American Geophysical Union. Outstanding Student Presentation Awards were given to less than 5 percent of students who presented at the meeting.

“Within my field of hydrology, there were only five students who received the award and I was happy to be one,” Rushlow said.

In the Alaskan Arctic, Rushlow studied water tracks, which are routes water travels through soil or snow before entering a stream network or above-ground waterway.  She spent three summers in Alaska from 2012 through 2014.

“We found that these water tracks are really important features routing water from landscape to the stream network, and that connection between the land and water is strongly controlled by how warm the air is and how much snow there is,” Rushlow said. “As climate changes up in the Arctic, the quality and quantity of water that water tracks route is going to change.”

Rushlow, who is finishing her Ph.D. dissertation this summer and now lives in Joseph, Oregon, said working in the Arctic was “incredible.”

“I spent three months there each summer, but since I was in the Arctic, I’d arrive when there was a meter of snow on the ground, work through the summer when there were clouds of mosquitoes and on into fall when the colors change,” she said. “A lot happens in three months up there.”

The Toolik Field Station is remote, located 370 miles north of Fairbanks. To reach it, Rushlow would fly into Fairbanks and then travel 8-1/2 hours north by truck, including travel on an unpaved, often ice-covered section of road that has been featured in the TV series “Ice Road Truckers.”

“You are way out there, eight hours north of any civilization,” she said.

Using the station as a base, Rushlow would travel further up the highway to various sites to measure water tracks, some times chasing storms to see their effect on them.  Although she worked six days a week, she enjoyed the weekly day off she had.

“I loved watching the season change, and seeing the caribou migrating through the area,” she said. “I also loved making connections with other researchers there, exploring the Brooks Range or hiking in trackless wilderness. I formed a deep connection to the landscape and a deep love of the Arctic.”

Her study, and others occurring out of the Toolik Field Station, could become more important as the effects of climate change increase.

“It’s anticipated, that it will get warmer up there and the landscape will change quite a bit,” Rushlow said. “It’s very important for me to talk about mitigating climate change because I don’t want that landscape I fell in love with to be destroyed by global climate changes.”

"Water tracks are places where the ground may be more likely to collapse as it thaws, forming deep gashes in the ground” Godsey said. “Understanding how water moves through these features is really important."

“I received a travel grant from the Graduate School and support from the geosciences department,” Rushlow said. “I’m grateful for the experience and the award was a cherry on top for that. I am happy to represent Idaho State University and my department.”