These piles of pellets can accumulate over thousands of years, being slowly buried by dust. After owls feed on small mammals and other creatures (which are usually swallowed whole), their stomachs cannot digest the fur, bones, teeth and other tough parts of the prey. These indigestible materials are formed into a tight pellet in the owl’s gizzard, which is then regurgitated. These pellets are often deposited at a specific roosting site, leading to relatively long-term accumulations of material in one location.

The primary focus of Commendador’s study has been an extraordinary collection of bone material accumulated by way of owl pellets excavated at the Wasden Site – a set of basalt caves where owls roost – in Southeastern Idaho, originally held at the Idaho Museum of Natural History at Idaho State University. Working in the ISU Stable Isotope Laboratory run by ISU biological sciences and geosciences Professor Bruce Finney, Commendador has been chemically analyzing the bone remnants with the goal of developing a reconstruction of climate for the Snake River Plain that extends back at least 10,000 years. 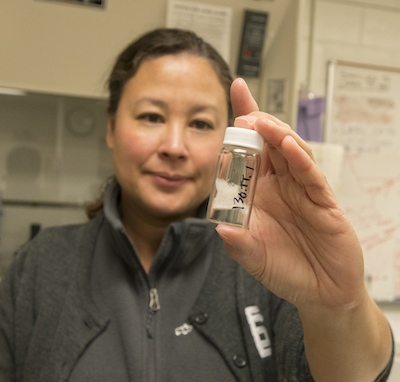 The Snake River Plain lacks natural lakes, typically used for this kind of research, so other data sources, such as these piles of bones, are necessary to develop models of past climate specific to the plain.

The small mammals that make up owls’ diets, such as pocket gophers and pygmy rabbits, served as good subjects for Commendador’s research.

“Small mammals are a good proxy for paleoclimate reconstruction because they have very small home ranges, they don’t migrate very far,” Commendador said. “When you are looking at the isotopic ratios in a small mammal recovered from owl pellets, you know that it is representative of a specific local area, in this case that surrounding the Wasden Site on the Snake River Plain.”

Small mammals are also good for paleoclimate reconstruction because they are sensitive to climate fluctuations. For example, if it gets too cold or too hot, they either have to migrate or they die. In addition, their diet needs are known, so they serve as samplers of the plants available to them at any given time.

In previous research, these animals allowed for reconstructions of past environments through the analysis of species counts and distributions.

“If you have a sequence of bones in a deposit you can look at abundances and diversities of small mammals in them and they will directly correlate with climate,” Commendador said.

Commendador, who works as a collections manager at the Idaho Museum of Natural History, decided to take it a step further by also analyzing isotopic ratios and changes in animal morphology, for example, body size, to track climate change over the centuries.

So far, Commendador’s study has looked specifically at the carbon and nitrogen stable isotopic ratios of herbivores.

Carbon isotopes reflect plant photosynthesis, and can change with drought and different plant types. By looking at the carbon isotopic data of these small mammals, Commendador was able to see the types of plants they have been eating over time. As the types of plants available to the animals is strongly mediated by climate, her carbon data provides a snapshot of climate at each point in time.

“Key variables that affect the nitrogen isotopic levels are temperature and precipitation,” Commendador said. “If temperature goes up and/or precipitation goes down, there are higher nitrogen15/nitrogen14 ratios.”

Looking at both carbon and nitrogen ratios over time allowed Commendador to reconstruct the fluctuations in climate over thousands of years.

“After looking at the isotopic ratios we found that it does look like these small mammals are tracking climate changes,” Commendador said. “Our evidence is that the climate was drier, and distributed differently throughout the seasons, in the past.”

Though her research isn’t completed, Commendador’s results suggest that plant communities in the Snake River Plain can change in response to climate. She is now continuing her study by looking at hydrogen and oxygen isotopic ratios and body size changes, to be concluded in the spring. This research will make up one part of her Ph.D. thesis.  She earned both her master’s and bachelor’s degree in her home state, at the University of Hawaii at Manoa, focusing on archaeology in the Pacific.

For more information on Commendador’s study, email her at commamy@isu.edu.

Bottom photo information: Commendador holding up one of the owl pellet samples used in the study.