The shark, which disappeared more than 300 million years ago during the late Paleozoic era, had baffled researchers. However, the same team that helped unravel some of the major mysteries of the “buzzsaw shark” Helicoprion (which is the focus of an Idaho Museum of Natural History traveling exhibit that has been seen by more than a half million visitors), was reassembled and went to work on the scissor-toothed shark. That team created a 3D model of the shark’s skull, and has put forth new information on how the scissor-toothed sharks’ jaws worked. 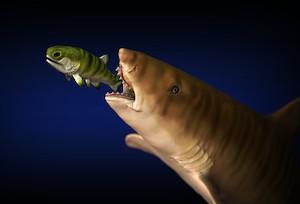 “The Edestus is a little bit older in time than the buzzsaw shark, but they are part of a bigger family of weird, ancient sharks that all have tooth blades on a spiral in the middle of their mouth,” Tapanila said. “Edestus, instead of having the full spiral, has a blade in the upper jaw and a blade in the lower jaw.”

These jaws of teeth create a curvy half-spiral that looks like scissors blades inside the mouth of the fish. The researchers said the shark likely used those jaws to “chop the ‘scissors’ down toward each other, stop just short, and pull back to slice the meat across.”

“It has a really interesting jaw mechanism that is totally unique to sharks, so it is fun to solve that kind of mystery and share that with the world,” Tapanila said.

The results of the study were published in journal The Anatomical Record in December in an article titled “Saws, Scissors, and Sharks: Late Paleozoic Experimentation.” Tapanila teamed with Jesse Pruitt of the Idaho Virtualization Laboratory in the Idaho Museum of Natural History; Cheryl Wilga, a biological sciences professor at the University of Alaska, Anchorage, and Alan Pradel, a professor at Sorbonne Université in Paris, France.

Similar to the work the researchers did on the buzzsaw shark, they used new technology on fossils collected many years ago to discover new information.

“We found a skull of Edestus that was collected over 50 years ago and waiting to be rediscovered at the Field Museum in Chicago,” Tapanila said. “That’s where this animal is housed, and we did the same kind of tricks, digitizing it and putting the puzzle pieces back together to construct the skull for the first time.”

This is now the only physical example of the scissor-toothed shark skull in the world.

“And just like other sharks, we find fossil teeth all the time, but finding a complete skull is ultra-rare,” Tapanila said. “It turned out the Field Museum had one. We found out about it and started working on it.”

Previously, this animal was only known by its teeth, which a lot have been found well preserved in the Midwest south of the Chicago area. 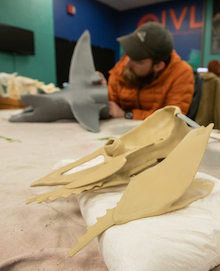 “Lots and lots of these shark teeth have been found in a lot of different places in the Midwest, but when you only have the teeth and no other parts of these sharks, all sorts of weird ideas come up about how it might work and how it might look, so it is really satisfying to work with a fossil that gives context for the first time so you can piece together how it really looked and, we think, how it functioned,” Tapanila said.

Tapanila also noted the Edestus fossils collected and the story of unraveling their mysteries highlight the potential value of other fossils collected. The scissor-toothed shark fossils were collected in the 1960s when researchers didn’t have the technology available to them that they have now.

“The value of our collections is absolutely enormous when you consider what future generations can do with them,” Tapanila said. “So this is another example of taking a modern technique to very, very old collected fossils that gives you totally new information you couldn’t have had before.”

PHOTO INFORMATION: Middle photo, One of the Idaho Museum of Natural History's visual reconstructions of the Edestus eating a fish; Bottom photo, 3D replica of a scissor-toothed shark skull by the Idaho Virtualization Laboratory.