POCATELLO – The new Idaho Dinosaur Exhibit, opening Sept. 22 at the Idaho Museum of Natural History, was created in large part by children age 11 to 15 who participated in Dino Camps hosted this summer by the museum.

“I think this is a game changer for how museums think about creating exhibits,” said Leif Tapanila, museum director. “It really allows for citizen science, bringing it to the kid level and training them up on how to use this equipment. I am positive we are the first museum to do this but I guarantee you that other museums will start doing it once they see how it can be done.” 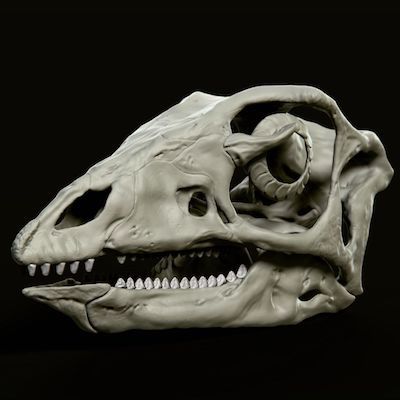 The exhibit features arguably Idaho’s most famous dinosaur, the Oryctodromeus, a large-dog-sized, plant-eating dinosaur that likely dug burrows for its young. Large numbers of fossils for this dinosaur, whose scientific name means “digging runner,” have been found in Southeast Idaho near Wayan and Grays Lake National Wildlife Refuge.

The new replicas of this extraordinary animal, the only dinosaur known to dig burrows, will now be found in the Idaho Museum of Natural History, courtesy of museum staff and computer-savvy teens who attended museum camps this summer and worked in the Idaho Virtualization Laboratory, managed by Jesse Pruitt.

“We had the kids come in and Jesse taught them the software and by the second day they were building bones,” Tapanila said. “So every bone in the body of this animal was digitally made by a kid – every vertebra, rib, arm and toe bone… every bone in the dinosaur’s body.”

The participants “digitally sculpted” the bones, guided by photographs of real specimens, during the first one-week camp. During the next one-week camp they digitally posed the dinosaur so it could be printed by the museum’s 3D printers. Museum personnel then take the plastic model pieces that are printed out and stitch them together to create the dinosaur models.

“The software is pretty complicated, but kids figured it out right away,” Tapanila said. “The new generation, they have no problem with this digital stuff – you show them what to do and they innately know how to use software and think three-dimensionally on a screen.”

“We are really excited how this new exhibit was created and we’re planning to do the same with a different animal next summer,” Tapanila said.

The campers will be able to create a larger animal because the museum is getting another 3D printer to add to its collection that can print out sculptures as large as 3x3x3 feet in volume.

“Most any bone from any animal fits in a 3x3x3 space, so we can start printing very large animals,” Tapanila said.

The new 3D printer is courtesy of a grant from the Laura Moore Cunningham Foundation, and the new 3D printer will become an exhibit of its own that will be put in the front window of the museum where people can view it in action, printing off 3D pieces.

For more information on the Idaho Museum of Natural History, visit imnh.isu.edu or call 208-282-3168.