POCATELLO – Idaho State University graduate student Andrew Dunn spent his undergraduate education studying the ins and outs of the Minidoka Internment Camp. For his graduate thesis, he decided to dig deeper into the history of food inside the internment camp, and how it affected both the camp and the world. 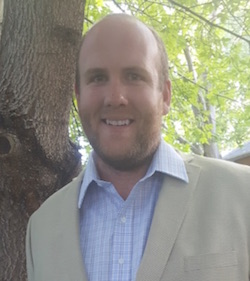 “There has been research on military and race relations, but nothing with food has been done,” Dunn said. “I wanted to look at Minidoka through a different lens.

Dunn received his associate’s degree in history from College of Southern Idaho, and chose ISU to continue studying history close to Twin Falls. One of his professors at CSI published a book on Minidoka, and Dunn wanted to know more and how to get involved.

“I called the National Parks and found out that they had a lot of opportunities to intern,” Dunn said. “They were short staffed so I got to take a lot more responsibility and have a larger role in projects.”

Dunn has now interned with the National Park Service at the Minidoka Internment Camp for three years helping with site management, tours and planning events. He also helps at the annual Minidoka Pilgrimage, where former incarcerees, their families and friends travel to Minidoka to learn, share memories and ask questions about their experiences. Recently Dunn was appointed to the “Friends of Minidoka” board of directors, the agency which oversees interpretation and projects at Minidoka.

“I planned on branching out on a different subject for my master’s, but decided to look at the food,” Dunn said.

From 1942 to 1945, more than 110,000 Japanese-Americans were removed from their homes in the Pacific Northwest and sent to live in internment camps after Pearl Harbor. The government saw them as a threat to the military and too dangerous to live on the west coast. The internment camps were placed on undeveloped federal lands in the Midwest so the Japanese-Americans could help develop the land.

Although the local residents initially said no, they realized they needed to utilize the free labor. Japanese-Americans also helped teach locals the techniques they used on their farms. Dunn said government records give them credit for helping the United States persevere during the war.

“The Japanese-Americans helped save sugar and the food supply in the country,” Dunn said. “Without them, there would be no food to go overseas, and not enough sugar to be used for bombs or ammunition.”

There were limited rations given at the internment camp, and residents had to make their own food. They became completely self-sustainable and had crops, and hog and poultry farms. They would also trade with camps in Utah for beef. Some records show they created their own tofu plant in Minidoka, which was one of the most popular foods they ate at home.

“They needed enough food to eat and also be able to hold onto their culture,” Dunn said. “Food history can be a means of cultural and social history, and helps us better understand how relationships evolved.”

Dunn is also looking into how being in the camp demolished the family structure. Families never sat down to eat as a family while at camp, because children ran to sit with their friends in the dining hall. Dunn said that this didn’t change once families left the camp.

Feb. 19 marked the 75th anniversary of President Roosevelt signing Executive Order 9066, which allowed for the arrest and incarceration of Japanese-Americans. Dunn recently had the experience to sit down with a woman who moved to the Minidoka Internment Camp when she was 10 years old. Dunn said he was able to learn about her experiences living in the camp as a child, and cross referenced other things he has discovered in his research.

For more information about the Minidoka Internment Camp, visit nps.gov/miin. To get involved with any current or future projects at the site, contact Dunn at dunnandr@isu.edu.