POCATELLO – Though many aspiring scientists don’t get the chance to perform lab research until they enter college, eight Southeast Idaho high school students had the opportunity to work in Idaho State University’s chemistry labs this summer thanks to the American Chemical Society’s (ACS) Project SEED.

Named for the Subcommittee on the Education & Employment of the Disadvantaged (SEED), a former ACS group that was involved in the formation of the project, Project SEED is an eight- to 10-week program that provides participants the opportunity to work with scientists, who help them develop laboratory, written and oral skills as they learn how to conduct laboratory research.

According to ISU chemistry professor and SEED coordinator Joshua Pak, SEED is designed to provide authentic research experience to economically disadvantaged students who otherwise might not have the chance to experience it.

“It’s a unique opportunity, because most students with an interest in STEM (science, technology, engineering and math) fields usually don’t have the chance to work in a lab until they’ve already started college,” he said. “SEED provides them that chance and helps foster an interest in research.”

Pak also said that many of the SEED students over the years have returned to ISU to pursue undergraduate and graduate degrees, and some have been published in academic journals. 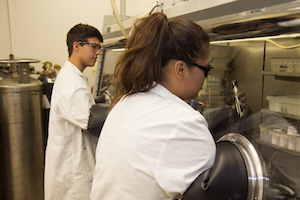 Andrew Holland, an ISU chemistry professor and SEED coordinator, said that a major benefit of SEED is that it aims to expand access to scientific careers to students who might not otherwise envision such possibilities for themselves.

“Lots of students subconsciously rule out this kind of career just because it’s pretty far outside their experience, so we try to put students into labs where they can start to see themselves as budding scientists,” he said.

He explained that the primary goal is to show them what practical science looks like, but there is also an informational aspect to the program where the professors try to make sure the students know what the academic path to a science career would involve in terms of getting scholarships, keeping on track with key coursework, and seeking future opportunities for working in labs.

In Holland’s lab, students explored new synthetic routes to inexpensive semiconductors that might be useful for solar cells or displays.

“The idea is to build molecules containing a combination of cheap metals like copper, zinc and tin that will undergo a reaction upon heating to form a mixed metal sulfide material with properties similar to the more toxic or expensive alternatives currently in use,” he said.

ISU typically has five to six SEED students each year, including both new and returning students. However, with additional funding from NASA-Idaho Space Grant Consortium (ISGC) in addition to their usual supporters at ISU and the ACS, the program was able to expand to eight students this year.

Holland said that for him, the most rewarding part of being involved with SEED is seeing students gain confidence in their skills.

“Even the most gung-ho participants are a little intimidated by walking into a research lab, so watching them rattle off technical jargon or perform complicated lab techniques at the end of the summer is always very rewarding,” he said.

Edith Gonzalez, a senior at Century High School who participated in SEED this summer, said that being involved with the program was a great experience.

“I was interested in pursuing a degree in STEM, but I hadn’t had much experience with it other than a few high school classes,” she said. “I feel a lot more confident after working in the lab over the summer.”

Gonzalez also said she would recommend SEED to interested students even if they haven’t had extensive practice with chemistry.

“Professor Holland is a great teacher and genuinely cares whether you understand the material,” she said. “He took a chance on me because I was interested in learning more.”

In addition to gaining lab experience, Gonzalez said the SEED program is a great way to build relationships.

“It’s been great getting to know all of the other participants as well as the professors and interns in the lab,” she said. “We’ve basically become a big family here, and I’m kind of sad that it’s coming to an end.”

For more information about the Project SEED Program, contact Andrew Holland at hollandr@isu.edu or Joshua Pak at pakjosh@isu.edu.