Chasing giant frogs, shooing iguanas out of the road and appearing on a national radio show were all part of a nine-day Idaho State University geosciences seminar held this spring on the tiny Caribbean island of Montserrat, which features an active volcano.

The group also ate swordfish, liver and hotdogs for breakfast, and to get home, at the last minute, had to charter a small plane to fly from one island to another when the boat service shut down unexpectedly.

The first week of April, nine students and three faculty members from the ISU Department of Geosciences traveled to the 10-mile-long, four-miles-wide island located in the West Indies, an hour-and-a-half boat ride from Antigua. The population is about 5,000 on this protectorate of the United Kingdom.

“It was a perfect location to take an educational group,” said Shannon Kobs Nawotniak, ISU geosciences assistant professor. “It is a tropical paradise with some of the most welcoming people you have ever met, who are truly invested in sharing their experiences and science to anybody who wants to come learn about it.” 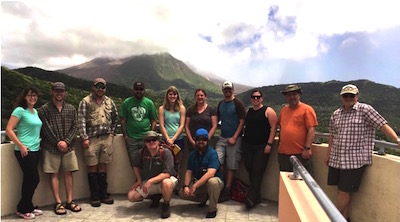 The ISU group went primarily to study the geology of the island’s active volcano, which started erupting in 1995 and had its last big “issue” in 2010. The volcano is still “degassing,” spewing out clouds of sulphur dioxide and other gasses. However, the group’s interests were wide ranging, from studying the ecological impacts of the volcanic explosions on land, including a problem with feral pigs, to how coral reefs bordering the island were damaged and the steps the local population is taking to help restore them.

“Now more than 50 percent of the island is uninhabitable and it destroyed their capital, which we visited,” said Shannon Kobs Nawotniak, ISU geosciences assistant professor. “At the capital, we were looking through windows that turned out to be the second and third floors of buildings, but were now the ground level. The volcano had just entombed them. The city, Plymouth, is known as the ‘Pompeii of the West.’”

The island’s original airport was also completely buried and deposits from the volcano expanded the island’s coastline by more than a half of a kilometer.

The ISU Department of Geosciences offers a one-credit seminar class each semester designed to give students field experience. In the past, the department has gone to various geologically interesting spots in the American West, such as the Grand Canyon, San Juan Mountains in Colorado, the Yosemite area of California, Glacier National Park and other spectacular areas, but this was the department's first international trip.

“Our department prides itself on our field education, it is the jewel in our crown,” Nawotniak said. “Every semester we pick somewhere new for our seminar that we want to go and the only prerequisite is geology 1101 or 1100. I think it’s a pretty unique thing we do at ISU.”

“It was a really valuable experience to be able to go and look at these sorts of deposit in the field, especially such recent volcanic deposits, that were very fresh so you could make good observations,” said Hester Mallonee, a geosciences master’s student from Seattle. “I had heard of Montserrat before the seminar was offered, and had always wanted to go there, both for its amazing geology and as well as the cultural aspects.”

There is another professional benefit for the students on the trip.

“With a big field trip like this, when you really have to dig in to the subject matter, you can list it on your CV,” Mallonee said.

Erin Sandmeyer, a junior from Boise, also commented on the trip’s value.

“You learn about this stuff in textbooks, but until I got out into the field I didn’t realize the scale of the volcanic eruptions and the destruction it caused,” Sandmeyer said. “It was great to go there to see it in person and relate it back to the classes I am taking.” 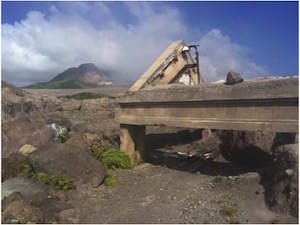 Because of connections the ISU geosciences department had with scientists on the island and the generosity of the scientists working at the Montserrat Volcano Observatory (MVO), the group was able to visit the island’s volcanic exclusion zone, which is off-limits to most visitors.

“We had the director of the MVO volunteer his time on a Sunday to sit in the control room and monitor the volcano so we could go up in the exclusion zone,” Nawotniak said. “We also had one scientist volunteer to guide us in the field for two days.”

The group almost didn’t get to leave on time, because when they were scheduled to go from Montserrat Island to Antigua Island to fly home, the national ferry system shut down. They got the last five seats on the only commercial airline leaving the island and then chartered a plane for the rest of the group.  They took off and landed in high crosswinds, which felt both adventuresome and scary.

“Trips like these are not the ‘spring break, hit the beach’ experience,’” Nawotniak said. “It’s going down, working with scientists and learning from them and learning from their communities in a way that injects money into their economy and is pretty affordable for us. We definitely want to go back.”

“It’s an incredible privilege to do these trips with our students and lets our students see a diversity of geology,” she added. “These trips are transformative and help our student figure out where they want to go next, what their career route is going to be.”

For more information on the ISU Department of Geosciences, visit http://geology.isu.edu/ or call 208-282-3235.