POCATELLO – Idaho State University Professor of Biological Sciences Colden Baxter has been elected president of the Society of Freshwater Science, the premiere international organization of scientists focused on freshwater ecosystems.

The society’s purpose is to promote further understanding of freshwater ecosystems of rivers, streams, lakes, reservoirs, and estuaries and ecosystems at the interface between aquatic and terrestrial habitats such as wetlands, bogs, fens, riparian forests and grasslands. The society fosters exchange of scientific information among the membership, and with other professional societies, resource managers, policy makers, educators and the public.

“I consider it an honor and I am excited for the opportunity to contribute at the national and international level to help lead this community of scientists,” said Baxter, who was honored as ISU’s Distinguished Researcher in 2015.  “ISU has a legacy of being a world leader in this particular field, freshwater science, so my election to this post is testimony to that. It reflects well on our university and the ISU Department of Biological Sciences.” 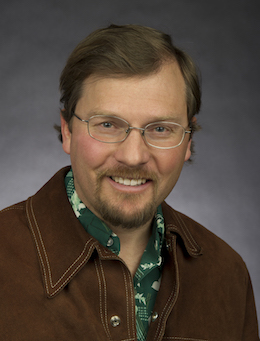 Baxter began his three-year commitment as president this summer, and will serve first as president-elect, then president and then past president.  He will also represent the society at various international conferences.

“I’ve focused my research at the local and regional level, but stepping into this roles I’ve be thinking nationally and internationally,” Baxter said. “As the group’s leader, I will play a role as a liaison between science and society.”

Baxter works with collaborators around the world, a community of ISU faculty, students and postdoctoral researchers, and is supported by his wife, Lenny, and two daughters, Arwen and Iris.

Research conducted by Baxter and his lab group at ISU’s Stream Ecology Center focuses on rivers and streams, but more generally on the ecological linkages between water and land. The group’s studies are aimed at improving understanding of the basic nature of such connections and the consequences of their disruption by human activities, but also contributing to better-informed conservation and stewardship.

Findings from Baxter’s research have broadened understanding of the flows of materials and organisms that link water and land, and how these are influenced by habitat degradation, changing climate, loss of species or the invasive spread of nonnative species.

For more information on the Society of Freshwater Science visit www.freshwater-science.org/.