The 13th annual Idaho State University Undergraduate Art Exhibition and Scholarship Competition will have its opening reception April 8 and the exhibit will run through May 3.

The opening reception will run from 5 to 7 p.m. April 8, with an awards ceremony beginning at 6 p.m., in the ISU John B. Davis Gallery located in the ISU Fine Arts Building. 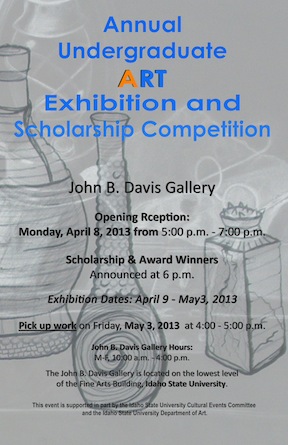 The jurors for this year's competition are Margo and Dennis Proksa, who are from Chicago and are now ﬁrmly rooted in Southeast Idaho, creating artwork independently. They met as art students at Southern Illinois University – Carbondale.

Thanks to employment as a welder at Bucyrus-Erie, they moved to Pocatello in 1975. After working at Bucyrus-Erie for two years, Dennis started Blackrock Forge. He studied blacksmithing on his own and furthered his studies at a National Endowment of the Arts workshop that put up-and-coming blacksmiths together with old timers like Francis Whitaker. Dennis studied in Prague with Vaclav Yaros, worked at Liberty Forge in Crested Butte, Colo., and Ironage Artworks in Queensland, Australia.

Margo was previously employed as the ISU Student Union Craft Shop director. She received an Artist-in-Residence for the Idaho Commission on the Arts, and restored the murals at the Chief Theater in Pocatello. Their collaborative work at Blackrock Forge is primarily architectural ironwork for the Sun Valley market. There were many years of contemporary furniture making for DeSousa-Hughes in San Francisco. Their artwork can be seen around Pocatello and includes the Hobo sculpture for the Portneuf Greenway, the Crane Gate at Edson Fichter Park, the Fish at Simplot Square, and the Bison at the Museum of Natural History.  They also currently have a sculpture commissioned for the city of Boise underway.

Dozens of students are expected to enter this year's competition and around 30 will be accepted into the show, displaying around 50 pieces of art. Last year, 15 students received awards and/or scholarships, and similar number is expected to receive awards this year.

This event is supported in part by the Idaho State University Cultural Events Committee and the ISU department of Art.