The fall 2010 Idaho State University Bachelor of Arts/Bachelor of Fine Arts Senior Exhibition is scheduled Oct. 18-29 at the John B. Davis Gallery, located in the ISU Fine Arts Building.

This exhibition will feature artists Mariann Bacharach, Ethan Chipman, Jordan Clinger and Chris Nelson. An opening reception for the artists will be held Monday, Oct. 18, from 6 to 8 p.m. All events are free and open to the public. 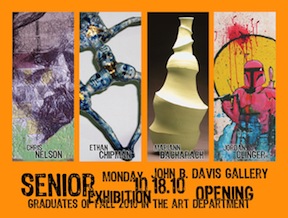 • Jordan Clinger grew up in American Falls, graduating from American Falls High School in 2002.  He has focused primarily on printmaking and other two dimensional disciplines during his studies at Idaho State University. His newest body of work incorporates pop culture icons and implied narratives, which are painted works that capture humor, character and irony.

“If I can make someone laugh or if they relate to an idea that resides in my art, then I feel that I’ve been successful,” Clinger said. For the last couple of years, Clinger has been a member of the local improvisation troupe, “The Comedy Project.”  He finds that live unscripted theatre, where self-confidence and trust in others is crucial, has been an important part of his development as an artist. Clinger will be graduating with his B.F.A. degree from the ISU Department of Art and Pre-Architecture. After graduation, he plans to relocate to a larger city and eventually pursue graduate studies.

• Born and raised in Pocatello, Christopher Nelson graduated from Pocatello High School in 2002.  Nelson attended Boise State University for his freshman year, looking to pursue a degree in photojournalism. Nelson later returned to Pocatello and continued his education at Idaho State University. It is at ISU that he would explore many possible academic avenues. After numerous semesters, Nelson came to the conclusion that art was his favorite subject. His focus has been predominantly painting, though he enjoys every form of creativity that he has encountered.  Nelson will be graduating with his B.F.A. degree from the ISU Department of Art and Pre-Architecture this fall.

• Mariann Bacharach was born in 1969 in Idaho Falls and spent the first few years of her life growing up on a potato farm.  Often Bacharach played in the mud created by the irrigation and believes this drew her to love working with clay. Her fascination with the repetition of lines and forms, found in nature and agriculture has also influenced her work.  Bacharach graduated from Blackfoot High School in 1986, and upon graduation moved to Houston to be with her father. Her father, a potter as a hobbyist, introduced her to the Foelber Pottery Gallery in Houston, where she was given studio and gallery space. Intending on studying architecture, Bacharach enrolled at the University of Houston and began studying art and art history formally. She also studied art at Boise State University and is now completing her B.A. degree in the ISU Department of Art and Pre-Architecture this fall. Bacharach's interests include learning more about sustainable architecture and materials, continuing the production of bronze tables she has designed, working with clay and developing her painting skills.

• Ethan Chipman, 32, grew up in Pocatello and now resides in American Falls with his wife Patty and their five children. They enjoy being active in church and spending time with their friends and family. Chipman has a double associates degree in graphic arts and printing. He is planning on graduating in May 2011 with a B.A. in secondary teacher education with an emphasis in art. Chipmans’ plan is to teach high school after graduation. He enjoys working in all types of mediums including painting, drawing, sculpture and ceramics.

“I’ve always enjoyed working with my hands, whether it is rebuilding bicycles, fixing cars or working on art,” Chipman said.

The Davis Gallery is located in the Fine Arts Building, Building #11 on campus maps, on the Pocatello campus of Idaho State University. For more information, contact Amy Jo Popa at 282-3341 or visit the gallery website www.isu.edu/art/galleries.shtml.