A longtime supporter and alumnus of Idaho State University passed away on Wednesday after a battle with pancreatic cancer.

Joe Jensen, a longtime supporter and alumnus of Idaho State University, passed away on Wednesday after a battle with pancreatic cancer. He was 79. 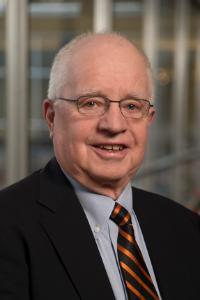 “Joe was dedicated to making other people’s lives better,” ISU alumni director Ryan Sargent said. “Joe embodies what it means to be an Idaho State Bengal.”

The Jensen Grand Concert Hall in the Stephens Performing Arts Center bears his name. Jensen and his late wife Cheryl’s generous support led to the completion of the facility, now known as one of the best performing arts venues on a college campus. The Jensen Grand Concert Hall seats up to 1,200 patrons and incorporates state-of-the-art acoustical technology to optimize sound and theatre experiences for audiences in a wide range of performances. The venue opened to the public in 2004.

For the past two decades, Jensen has served on the ISU Foundation Board of Directors, including a term as president. His efforts were key in moving the Idaho Museum of Natural History to a new level of support and community engagement in his role as chair of the Natural Heritage Project advisory board.

In May, Jensen was awarded the President’s Medallion, one of the highest honors given at Idaho State University.

“Our University is not able to thank Joe enough for the many things he has done for Idaho State,” said Satterlee. “The impact he left on our Bengal community will not be forgotten. Idaho State University is a better place because of Joe.”

Jensen enrolled at Idaho State in 1961. As a student, he served as senior class president, chapter president of the Blue Key national honors fraternity, student body government finance committee chair, and French club president. He earned a Bachelor of Arts in French and went on to earn an MBA from Dartmouth’s School of Business. After Dartmouth, Jensen started his distinguished international career with Pfizer, working in England, Belgium, Portugal, Africa, and India.